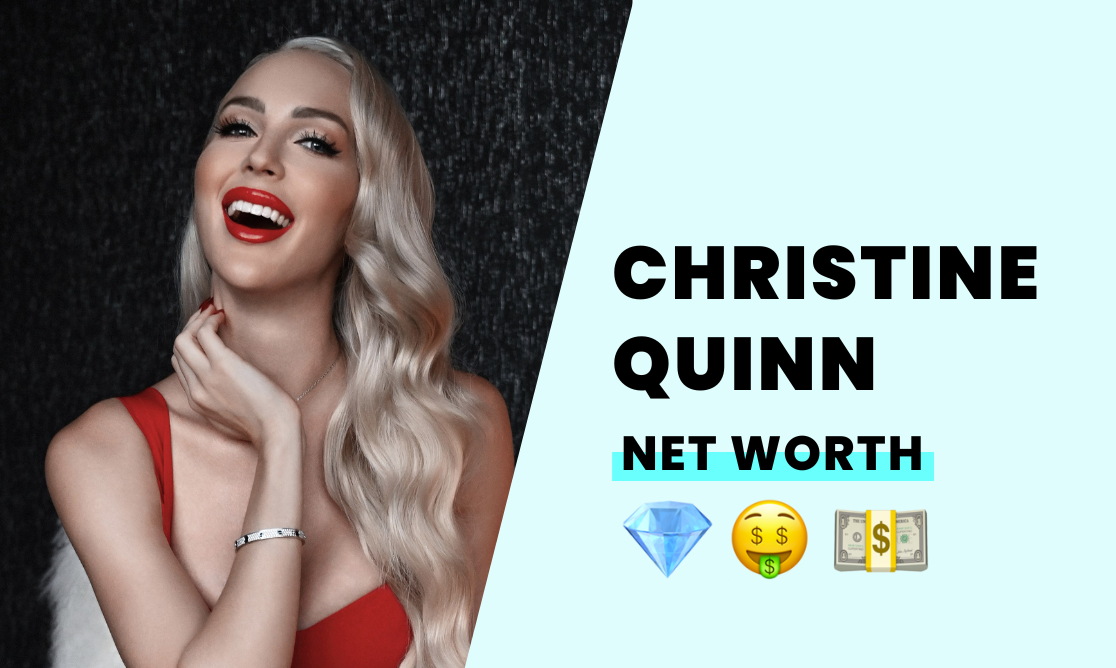 Christine Quinn's net worth is estimated to be approximately $2-3 million.

Christine Bently Quinn was born in Dallas, Texas, on October 14, 1988.

She left Texas to move to LA to pursue a career in modeling, acting, and fashion design. She made her debut in the industry in 2010 with the film “The Father of Invention.” Unfortunately, Quinn is mysterious regarding her past and doesn’t discuss much from her early life.

Quinn explained that her youth was tainted with darkness. “I had a mother who was extremely ill—she got cancer for the first time when she was 40” and had multiple health issues. Quinn has stated that her mother’s health caused her to leave school and be homeschooled to look after her. She believes that leaving school and dealing with her mother’s health forced her to grow up quickly.

Christine also told “Vogue” that she doesn’t have a high school diploma, something she is insecure about. However, it is clear from Christine’s self-made wealth that formal education isn’t required to be successful!

During season 1 of “Selling Sunset” in 2019, Christine took the California Real Estate Exam after studying for three months.

Not much is known about Christine’s parents, Paul and Barbara Quinn.

Paul’s LinkedIn states that he graduated from Clevland State University, earned a BSME in Mechanical Engineering Technology, and works as a Global Key, Account Manager for an aerospace company.

Christine’s mother's health has been of constant concern. She has dealt with Raynaud’s Syndrome, suffered from breast cancer twice, and had spinal and heart surgery. “She has been sick my whole life,” Christine said.

Christine’s husband, Christian Richard (who is ten years older than her), retired early after making millions as a tech entrepreneur following a successful career in software engineering. The pair welcomed a baby boy in May 2020, Christian Georges Dumontet, who she lovingly nicknames “Baby C.”

How did Christine Quinn build her net worth?

Christine Quinn's net worth comes mostly from her role in the hit TV show “Selling Sunset,” but she modeled and acted for a living before the show shot her to fame.

Before she joined the cast of "Selling Sunset," Christine brought in the bucks through modeling and acting. She has modeled for “Vogue” and acted in movies like “Shark Night 3D,” “Humans vs. Zombies,” and “Hot Tub Time Machine 2” as well as popular TV series such as “NCIS: Los Angles.”

She worked at The Oppenheim Group, a high-end real estate agency based in Los Angeles, until she left to form her own company, RealOpen, with her husband. They deal in cryptocurrency purchases of properties.

Because of how real estate agents are remunerated, Christine didn’t earn a salary from working at Oppenheim, although she would have been paid large commissions on the sales of the multimillion-dollar houses she was selling. A typical split would see the agent getting a whopping 75% of the total commission per sale, with the remaining 25% going to the agency.

Quinn's fame and net worth took off when she joined Chrishell Stause and the cast of realtors on "Selling Sunset," where she stood out because of her aggressive, fun personality and eye-catching, fashionable outfits.

According to a study done by a marketing agency, seasons one through three of “Selling Sunset” saw her sell $37 million worth of real estate for a total commission of $1,082,400. She would have banked an estimated $811,800. Not too shabby.

After five seasons of “Selling Sunset” and another two in the pipeline, Christine’s net worth will continue to grow!

Christine has also authored her own book, "How to Be a Boss B*tch: Stop Apologizing For Who You Are And Get the Life You Want." In it, she writes about how she manifested her own success to make her fortune. Royalties from her book sales help keep her net worth ticking over in the right direction.

I made my first million from property and investments... and at around 26, when I started making money, I really went all in. ~Christine Quinn

How has Christine Quinn spent her wealth?

Christine and her husband, Richard, live in their dream home, a 5,917-square-foot Hollywood Hills mansion. Worth around $5 million, it has five bedrooms and seven bathrooms and was previously owned by one of Hugh Hefner’s wives. The three-story property is above Los Angeles’ famous Sunset Strip; it has been renovated and redecorated at a considerable cost to Christine’s exacting standards.

The house also boasts a game room in the basement where they entertain, complete with a wet bar and playful neon signs, an arcade game, a dart board, and an air-hockey table. Last but not least, a bedroom was converted into her “glam room,” housing a considerable amount of designer wear, accessories, and shoes.

To make the house even more “extra,” Christine has an exciting addition to her backyard in the form of a tiger! She is extremely security conscious, and after receiving multiple death threats, she purchased this rather daunting pussy cat to scare away potential threats to her property and her family.

It is also well-known that Christine spends a lot of money, giving her young son everything his heart could desire, and when she travels, it certainly isn’t in coach. Instead, there are private jets, private yachts, and luxurious vacations in exotic locations.

Quinn is also very open about the fact that she has botox and has had other plastic surgery, including a boob job. But, she admits, “My glam isn’t cheap, either—$1,000 daily.”

As well as being lavish in her own life, Quinn explained that she makes it a point to give back. In an interview with “People,” “I do giveaways on my Instagram where I just give away money to random people,” she said.

How rich is Christine Quinn?

Christine Quinn has a net worth of between $2 and $3 million.

Is Christine Quinn a millionaire?

There is no doubt that Christine Quinn is a millionaire. "I made my first million from property and investments... and at around 26, when I started making money, I really went all in,' she told Vogue.