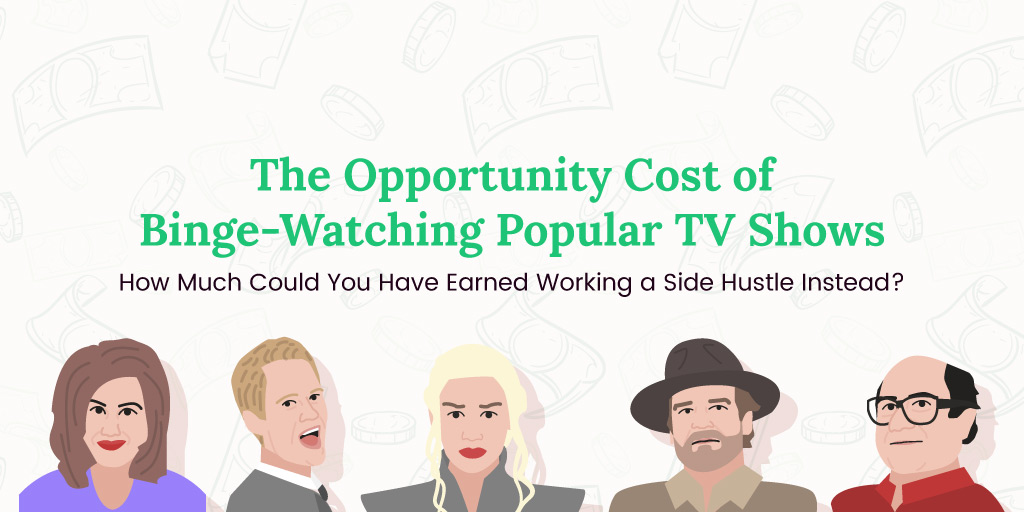 We’re all guilty of it – you sit down to watch just one episode of a show, but that quickly turns into two and before you know it, it’s dark outside and you’re halfway through the season. Streaming platforms like Netflix and Hulu make it easier than ever to enjoy your favourite shows and as a result binge-watching has become a common way to pass the time. In fact, it’s so common that the term binge-watching was officially added to the Merriam-Webster Dictionary in 2017.

To explore the opportunity cost associated with binge-watching TV shows, we calculated how much money you could earn if you work a side hustle instead of watching every season of your favourite TV show.We included the average hourly wage associated with the following side hustles in our analysis: babysitting, bartending, fitness coaching or teaching, freelance writing, mystery shopping, pet sitting, driving a rideshare, tutoring, waiting tables, and working at a retail store.

The analysis includes both TV dramas (Breaking Bad, Game of Thrones, Grey's Anatomy, Law and Order, Stranger Things, and The Walking Dead) and sitcoms (Friends, How I Met Your Mother, It's Always Sunny in Philadelphia, Modern Family, Parks and Recreation, Seinfeld, The Big Bang Theory, The Office, and The Simpsons).

With total run times ranging from Stranger Things’ 20.83 hours to Law and Order’s 456 hours, the opportunity costs associated with each show is incredibly eye-opening. Read on to learn more about what we uncovered. 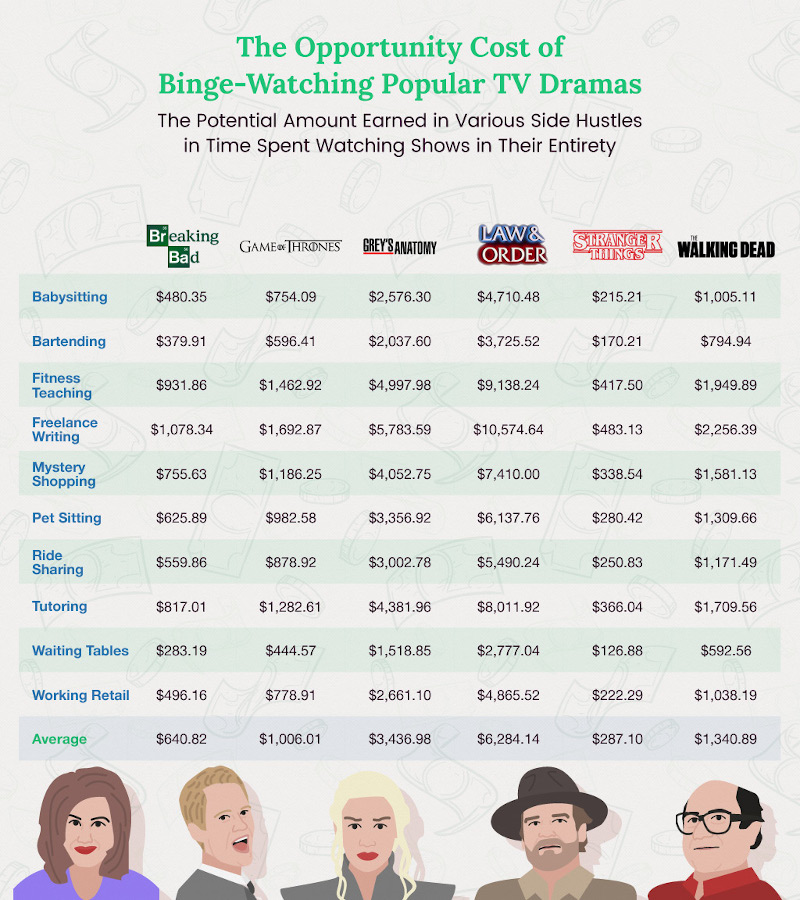 First, we calculated the amount that could have been earned working side jobs in the time spent binge-watching popular TV dramas. As it turns out, the average person could have earned $2165.99 in the time it took them to binge-watch these TV dramas.

The show with the shortest run time, Stranger Things, still results in over $400 earned either teaching fitness classes or freelance writing. And if you’ve seen all 20 seasons of Law and Order, you’ll shudder to know you could have saved quite a bit of money if you’d spent that time in more productive ways. You could have earned over $5,000 teaching fitness classes, freelance writing, mystery shopping, driving for a rideshare, or tutoring. 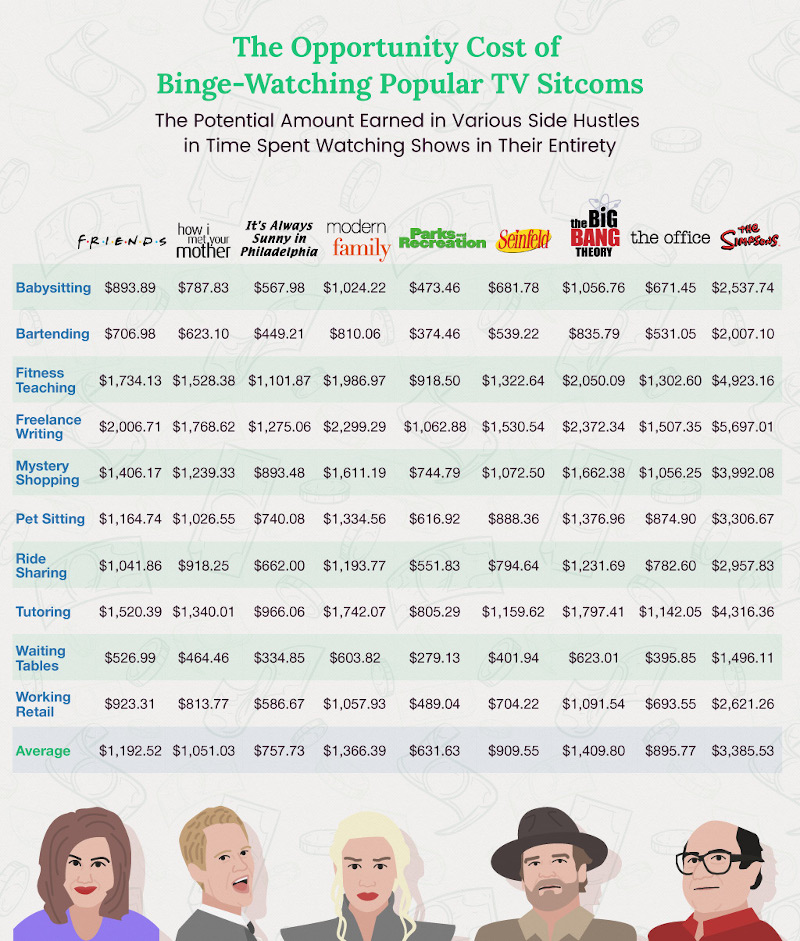 Moving onto another popular TV genre, we calculated the opportunity cost of binge-watching popular TV sitcoms. Sitcom episodes are generally shorter than dramas, with an average length of 22 minutes. As a result, the average amount earned through side hustles in the time spent watching TV sitcoms included in the study is $1,288.88, nearly half of the dramas’ average.

If you’re planning to binge-watch Friends or The Office before they make their departure from Netflix, you should take note of how much you could earn by working instead. In the time spent watching all 10 seasons of Friends or 9 seasons of The Office, you could earn more than $1,000 teaching fitness classes, freelance writing, mystery shopping, or tutoring. 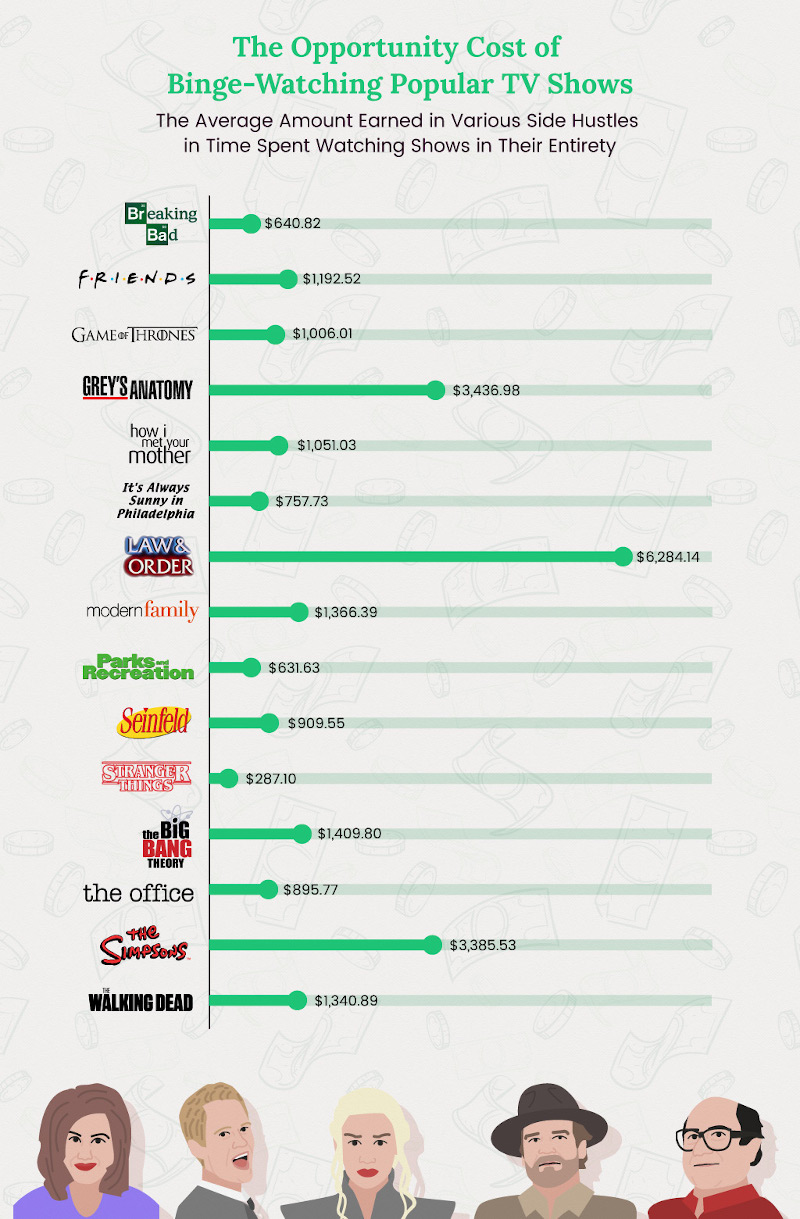 Finally, we took a comprehensive look at how all of the TV shows in the study compared in terms of the potential average amount earned doing side jobs. The highest averages belong to the longest-running shows in the study: Grey’s Anatomy (16 seasons), Law and Order (20 seasons), and The Simpsons (31 seasons).

Takeaways from the Study

The next time you settle in for a binge-watching session, we hope this study comes to mind and you limit the amount you watch and seek out a side hustle instead (or at least multi-task and do some freelance writing while watching…). Side hustles can be excellent ways to earn extra money to repay debt, build up your savings account, and more, and luckily they can be relatively easy gigs to secure. For instance, sites like Upwork and Freelancer are great resources to seek out freelance writing opportunities. This should of course be balanced with an appropriate amount of relaxing. Downtime is important to remaining productive and, most of all, happy. What side hustles have you tried and how did you find them?