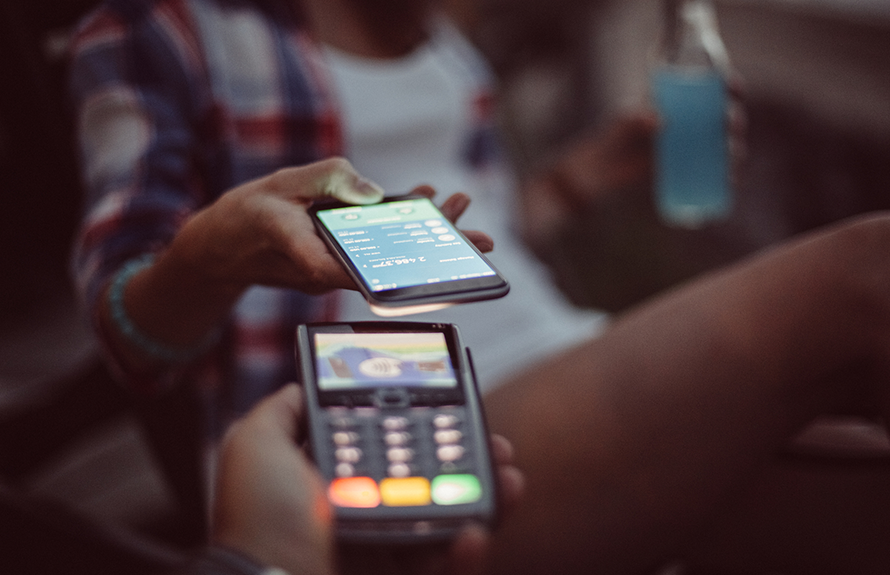 The digital wallet has exploded in popularity. Combining convenience, user-friendliness and – most importantly – security, digital wallets are now a common tool for everyday transactions.

Even though the biggest tech players like Google and Apple have invested in creating their own dedicated apps, research reveals that 76 percent of people with digital wallets never – or only rarely – use them.

So what exactly is a digital wallet?

Essentially, a digital wallet is almost exactly the same as a physical wallet. With a typical wallet you can:

It’s simple. It’s easy. It’s convenient. A digital wallet does exactly the same things – only digitised. It uses near field communication (NFC) technology to ‘pass’ your credentials to a merchant wirelessly, allowing the free flow of payments without exchanging any physical cash.

One of the biggest pluses of storing your money online is the added layer of security. If your physical wallet is stolen, all that cash is gone. If you lose your phone then the thief can’t access your digital currency unless they are also able to unlock your phone and enter the secure PIN linked to your digital wallet account.

Like most things touched by technology, it’s a new and improved way of storing your money safely.

Perhaps surprisingly, digital wallets have been around for decades – as far back as the 1990s. The most notable example is PayPal, which was – and still is to this day – used as a digital payment solution for eBay customers. In its early incarnations, however, security wasn’t as tight as it is today, and customers were slow to adopt the technology for fear of losing out on a transaction or, worse, giving hackers an opportunity to exploit their bank accounts directly.

While those fears were mostly unfounded, it wasn’t until 2008 that digital wallets really started to enter the mainstream. You may recognise this period as when the Apple revolution was in full swing, and a certain App Store ushered in a new age of digital transactions. Third-party developers suddenly had access to Apple’s secure payment infrastructure, and users had no qualms in paying for apps to improve their lives.

According to Russ Jones, a Glenbrook Partners analyst, there was a period up to 2011 where the industry was “up for grabs” as there was still a lack of certainty around how the earliest mobile wallets would communicate payment data.

Fast-forward nearly a decade later and digital wallets are more intelligent, more secure and more commonly used for everyday transactions at supermarkets and retail outlets. The rapid uptake is so apparent that in developed Asian economies like China, physical wallets are already considered a relic of the past. Just let that sink in for a second. According to the Australia China Business Review, digital payments are so ingrained in daily life that street beggars in China use digital systems to obtain currency.

China has the potential to be seen as the poster child of a cashless future – and Australia is watching.

Two of China’s biggest mobile payment systems providers, Alipay and WeChat Pay, are making waves across the Australian retail market. So much so that retailers want the providers to help them tap into $11 billion worth of Chinese tourist spending in Australia.

With the announcement of a partnership between Alipay and Australia’s own Smartpay, the rollout of Alipay in our country is closer than ever. And with over 600 million people already part of the Alipay revolution, it’s obvious this is only the beginning.

Further west, India is another example of a large-scale economy where the volume of digital transactions have been skyrocketing. Adoption is widespread and payment acceptance is becoming ubiquitous. Walk around Delhi and you’ll spot signs for Samsung Pay, MobiKwik and Paytm at all the shops. It’s also an economy where the government has led a crackdown on some denominations of cash in 2017 when it declared the 500 and 1,000 rupee notes no longer legal tender. Indians weren’t exactly thrilled.

Waiting in the wings was Alibaba and Softbank backed company, Paytm, who have positioned themselves expertly to pick up the gap left by these particular cash notes in India, and it’s cash which these payment platforms are competing against. Inside the MobiKwik app, the money is being drawn from a wide variety of sources: debit cards, credit cards, bank transfers, other digital wallets and a few other inputs.

The core benefits of a digital wallet

Clearly there’s a massive market for digital payments, but what makes a digital wallet so great? Why should you have to look after another wallet when cash will probably never go away?

How many times have you been stuck in a line while waiting for a customer to rifle through their bag for the exact amount of change? Digital wallets act on a tap or scan system, which makes transactions practically instant. Quicker purchases make everyone happy, and you can be on your way without worrying about having enough cash on hand or searching for the credit card that will give you the most rewards points.

While it may not impact you immediately, store owners who use digital point-of-sale (POS) systems eliminate the need for intermediaries. A great case in point is the introduction of touchscreens across fast-food chains. You can make your order, pay for it with your digital wallet and only have to interact with an employee when collecting your food. Fewer cashiers means lower overheads for the store, and those savings can be passed on to customers.

Cash-only businesses are a rare sight these days. Even at farmers markets and cafes, sellers are able to accept digital payments with their mobile POS systems. This is a clear indicator of the future, where less and less cash will be exchanged no matter what you’re buying.

Obviously you need to do your due diligence before investing in a digital wallet – there are always risks to storing your information and money online – but all the top providers pride themselves on well-protected, encrypted systems that will keep your money much safer than when stuffed into your back pocket.

A cashless society on the horizon?

This does raise the question of a cashless society – something often theorised in the sci-fi novels of yesteryear. Are we really approaching a point where physical tender will be eliminated from our lives?

Physical cash still serves a purpose, especially when you consider how it is related to inflation.

Back to India, Madhur Deora, CFO & Senior VP of Paytm, was asked if he thought a cashless economy was coming to India he says, “There’ll be less cash, it won’t be zero cash. Almost no economy in the world is [cashless].”

Aside from the technical aspects, the death of cash would introduce new problems while compounding common struggles. For example, while it’s still possible to spend too much when using physical money, having only a digital representation of your funds can lead to overspending. In much the same way, the old-school method of keeping cash in envelopes when budgeting has its merits. After all, it’s a lot harder to stretch your grocery budget when you only have a set amount of physical cash, rather than access to all your money in a single digital account.

One interesting issue that has arisen from the use of not just digital wallets, but credit cards – which act in a very similar way – is worse eating habits. A much cited Binghamton University study reported on the average purchase price of McDonald’s orders. For customers who used cash only, the average purchase was $4.70. Those who paid via credit card, however, had an almost 50 per cent higher purchase price of $7 per order.

The rise of crypto 'hot wallets'

Just because cash won’t be going away any time soon, that doesn’t mean you shouldn’t jump on the bandwagon. Beyond the standard digital wallet, there’s been a rise in ‘hot wallets’ to house cryptocurrencies.

In much the same way as digital transactions, cryptocurrencies like Bitcoin have disrupted financial markets over the past few years. We are still finding our way around the ‘true’ value of crypto, and whether it should be able to influence the long-standing value of traditional cash, but tech-savvy entrepreneurs have already developed their own versions of digital wallets to protect the stores of crypto traders.

Are digital wallets worth using?

Like all new technologies, not everyone will end up using a digital wallet. After all, some people who already own wallet apps either don’t see the tech as beneficial or don’t plan on using them over the next year.

It’s clear that digital wallets bring plenty of benefits to the table, so it’s worth weighing up the pros and cons before deciding whether it’s a tool that could improve your daily life.

It's clear that digital wallets bring plenty of benefits to the table.

The best digital wallet for you

If you’ve considered all the benefits and have decided that a mobile wallet is right for you, what next? Do a bit of research into the various options out there. Do you want a wallet that’s heavy on security, or are you all about a friendly user interface (UI)? Do you want to link rewards systems to your account, or do you need to make quick and easy payments across multiple currencies?

Google, Amazon and PayPal were first through the door to establish something of a stranglehold on the digital wallet space. So it’s unsurprising that these tech giants are often the first port of call for newcomers to digital wallets.

The two largest credit card providers in Australia have their own wallet apps, with Masterpass and Visa Checkout both offering users a sleek UI, as well as specialised deals and promos at specific online stores. Apple Pay and Google Pay are great options for first-timers, and Aussies who love rewards systems will be happy to see major grocery chains like Woolworths offer integrations so they can earn points whenever they make a digital payment.

Not ones to be left in the dust, you'll find wallets associated with the big banks too. CommBank in particular has already developed, launched and subsequently axed its Kaching digital wallet within the space of a couple of years. It refused to leave a gap in the market, instead rolling all of its digital wallet services into its flagship smartphone app. (Although it's worth noting that CommBank doesn't currently support Apple Pay).

Go forth and purchase

It’s been a disruptive few years in the financial services market, thanks in large part to the rise of alternative payment methods like digital wallets. While not for everyone, the technology presents an easy and safe way to conduct transactions, while also opening up creative avenues for developers to create exactly what consumers desire.