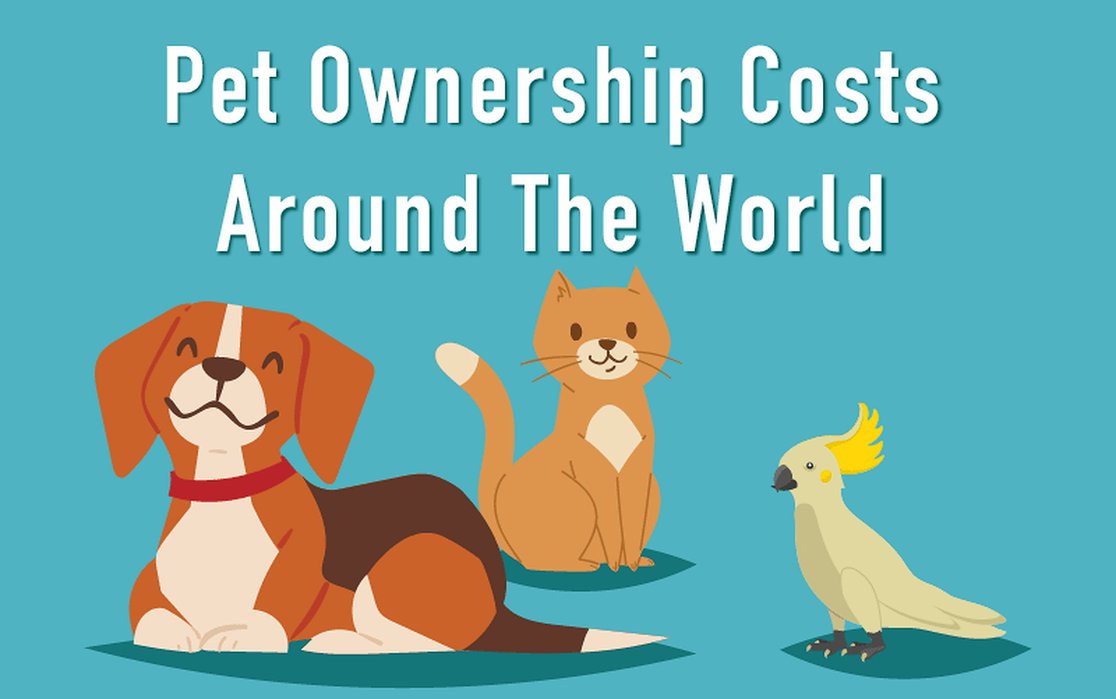 One of the near-universal truths of the world is that people love pets. Like, really love them. This is something that is true of pet owners around the world, who shower their furry, feathered, or scaly best friends with love and affection no matter where they are on the globe.

That love means that most people don’t give a second thought to the costs associated with raising their four-legged family members, as you can’t put a price tag on the unconditional love that pets provide. That doesn’t mean those costs don’t exist, however. Between food, toys, accessories, and medical and grooming costs, the price of a pet can really add up over time-although nearly all pet owners will say it’s more than worth it.

We decided to take a look at exactly how much different pets can wind up costing their owners, both to inform prospective pet parents as to what they should budget for their new family members as well as to help those who already have pets estimate how much they have already spent caring for their animal companions. Using a variety of sources, including news articles, studies and surveys of pet owners, veterinary websites, and online pet stores, we were able to find or estimate many common costs associated with dog ownership. We investigated both recurring and one-time costs for a variety of pet types, and also looked at how those costs differ in countries around the world. Read on to see what our research turned up on your favourite pet!

The cost of owning a dog

Of course, we have to kick things off with man’s best friend, dogs. The love, loyalty, and companionship dogs provide is truly priceless. From puppy cuddles to games of fetch to the sheer joy on their furry faces when their humans come home, owning a dog is an experience that almost all owners would happily say is worth more than any monetary value.

Thankfully, the actual price for all this love and affection is actually pretty reasonable. Adding up the costs of one-time expenses like leashes, collars, and training courses with annual costs like food and veterinary care we were able to find how much a dog could cost their owner over an average canine lifetime of 11 years around the world.

This analysis found that dog owners in Japan can expect to pay the most of any nation we evaluated, and it isn’t particularly close. Hefty annual costs for canines in Japan mean that over the course of a dog’s lifetime, an owner could reasonably expect to spend $42,000 AUD on their pet, over $12,000 AUD more than the next-highest country. On the flip side, dog owners in India are looking at a price tag of less than $5,000 AUD over the course of their dog's life, a mere fraction of their counterparts in Japan. This level of affordability may help explain why India has the fastest-growing dog population in the world.

The cost of owning a cat

We used similar resources and strategy to the ones used for the dog graphic in order to gather data on the costs of owning a cat around the world, although we did adjust things to reflect the different costs between the two animals. After all, it’s pretty important for cat owners to keep a healthy supply of kitty litter on hand while it would mostly be a waste to spend money trying to train a cat!

Once again we added up annual and one-time costs over the average lifespan of a cat (12.5 years) to find the lifetime cost of being a cat owner. On the whole, we found in the majority of countries analysed that it is cheaper to own a cat than it is a dog over the course of their respective lifetimes, although in Canada, Germany, and South Africa, cats prove more costly. Similar to dog costs, Japan is the nation where owning a cat costs the most and India is where it costs the least.

While cats may generally be cheaper on a per-pet basis, it is worth noting that people who love cats REALLY love cats, with a recent estimate finding that a typical cat-owning household has 2 cats on average while dog-owning households only have an average of 1.49 dogs. While having multiple cats means they can share toys, it also makes it that much more important to keep a full stock of kitty litter handy at all times!

The cost of owning a bird 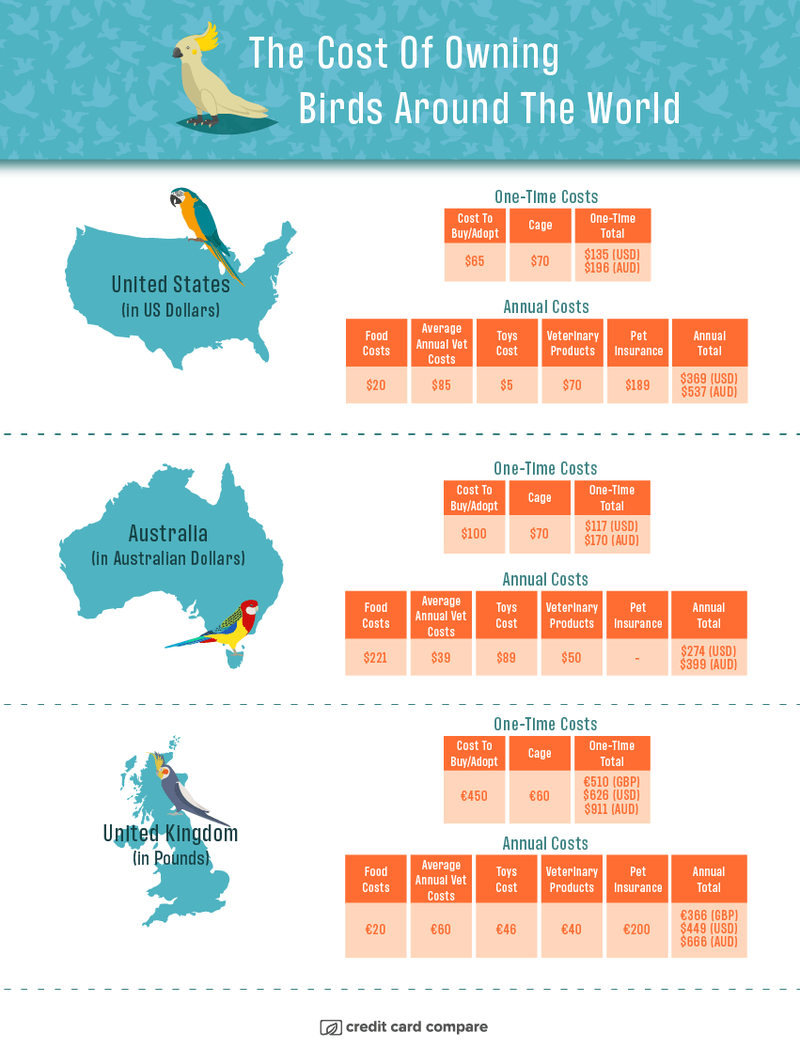 Of course, there are plenty of pet owners out there with an animal friend that isn’t a cat or a dog. For that reason, we also looked up data on the costs of bird and reptile ownership in Australia, the United States of America, and the United Kingdom. The lifespans of both of these kinds of pets is extremely variable based on species, and for that reason we did not calculate lifetime cost estimates for these graphics, though any bird or reptile owner can use our one-time and annual cost numbers to do the math based on the average lifespan of whichever species their pet happens to be!

Birds were the last pet where we could find reliable data on the costs of pet insurance, which is a newer concept that more and more pet parents are taking advantage of. By paying monthly or yearly premiums to an insurance company, owners know that their animal friends are covered in case of a major accident or illness. There are countless stories of owners who have been able to use their pet insurance to cover major surgeries and ongoing treatment for ailing pooches, kitties, and birds that otherwise would have been prohibitively expensive. Thanks to these kinds of insurance offerings, owners and pets around the world have been able to add years of time bonding and loving one another to their lives.

The cost of owning a reptile 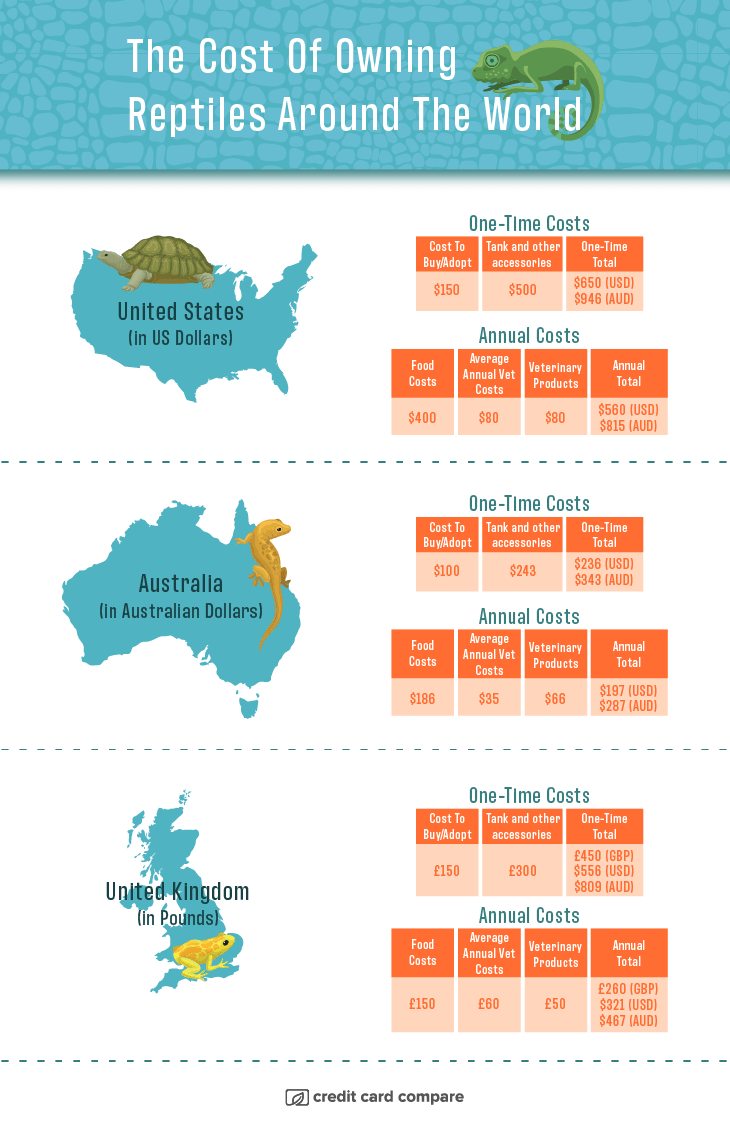 One of the biggest costs associated with owning birds and especially reptiles is in purchasing a home within your home for them. While cats and dogs can roam free for the most part, allowing your feathered or scaly friends to do the same could cause some major problems as well as some missing pets. For that reason, cages and terrariums are a major one-time cost (as illustrated in the graphic above) for these animals that don’t apply to cats and dogs. Trust us, while it may be the perfect place for your lizard, trying to keep a cat in a terrarium can only end badly.

Of course, no matter how much or how little you spend on your pet, it is a small price to pay for the unconditional love and friendship they provide. Still, for anyone looking to get even more benefits from pet ownership, rewards credit cards are a good start for earning points on things like pet food, toys, kitty litter, and everything else you need to give your pet their best life!