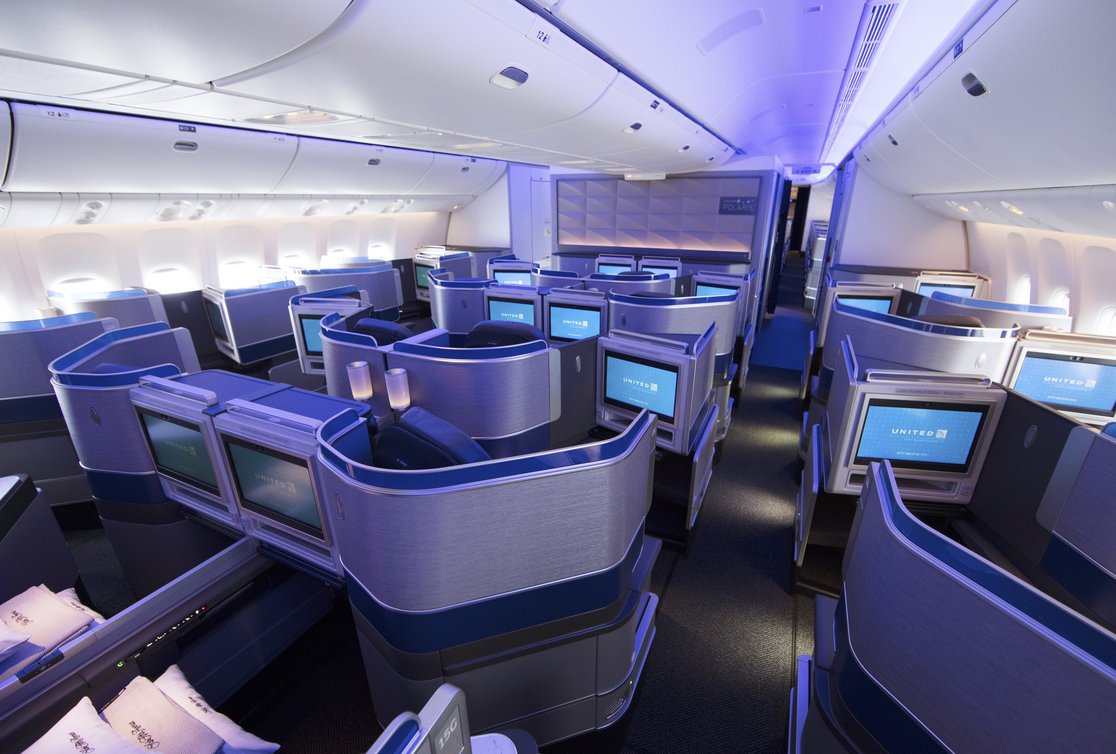 Credited as the first true “frequent flyer” program among international carriers, United Airlines MileagePlus is one of the largest programs in existence today. When combined with their Star Alliance partners, there are very few places in the world not accessible through MileagePlus points.

Is United Airlines MileagePlus the right program for your international travels? For some flyers who primarily fly with their partners, MilgeagePlus could offer a lot of value over the long term – especially with their generous elite policies and award prices to certain destinations.

Today’s United Airlines MileagePlus program is actually the loyalty program of two airlines: Chicago’s United Airlines and Mexican carrier Aeromar. However, Aeromar is not owned or operated by United – so this article will focus solely on United and its Star Alliance partners.

The modern MileagePlus is the result of the 2011 merger between United Airlines and Continental Airlines. But the program dates back to 1981, when United launched their first loyalty program one week after American Airlines’ AAdvantage program. Through a set of mergers and acquisitions, the program stands as the primary program of the airline and one of five “charter” loyalty programs in the Star Alliance.

Today, United frequent flyers can earn and redeem their miles for flights on United Airlines or 27 other Star Alliance partners. In addition, members of the United Club or those who hold elite status with United MileagePlus can access over 1,000 lounges within the airline alliance network – making this loyalty program one of the largest in the world.

Nearly anyone can join the United MileagePlus program – and it’s free to join. To sign up, visit the United Airlines website and fill out the form.

During the enrolment process you will be asked for personal identification information, including your name, address, and phone number. At the end of the process you will be asked to create a password and set five security questions, in order to access your account if you lose the password. On future logins, you will use your United MileagePlus number and password to access your account.

After signing up, you will have the option to put in some information for additional ease of travel, including a Known Traveller Number and your passport number. Once you are set up, you can use your United MileagePlus number to earn miles aboard United and other Star Alliance members. 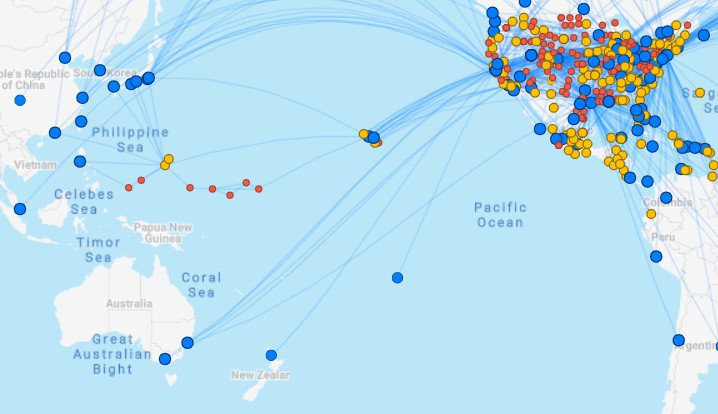 With an international footprint focused mostly on Europe and Northern Asia, United serves 189 cities in 74 countries. On the Pacific Rim, United offers direct flights on the following routes:

United is a charter member of the world’s largest airline alliance: Star Alliance. With their partners around the world, United MileagePlus frequent flyers can use their miles to hundreds of destinations. United's Star Alliance partners include:

United also maintains partnerships with 11 other airlines outside the Star Alliance, which allows flyers even more flexibility in earning and using miles. These airlines are regional or boutique airlines, often serving one geographical area. The 11 worldwide partners include:

As with other airline alliances, your earnings and award costs will vary based on the partner and class of service. We’ll go into some of your best options later.

Alongside their partnerships with Star Alliance and other worldwide partners, United MileagePlus also has a partnership with Marriott Hotels’ loyalty program: Marriott Bonvoy. The program is called RewardsPlus – and if you have status with one program, it could turn into status with the other.

Marriott Bonvoy Titanium and Ambassador Elite members get complimentary United MileagePlus Premier Silver status, the lowest tier of loyalty. At this level, members get one complimentary checked bag (up to 32 kg), Premier Access priority support (where available) and access to Economy Plus seats on the day of travel.

Or if you have United MileagePlus Premier Gold status, you can sign up to receive Marriott Bonvoy Gold status. Gold status at the hotel chain includes complimentary enhanced WiFi, 2 pm guaranteed late checkout and 25% bonus Marriott Bonvoy points after each stay.

What do the average seats look like aboard United?

Launched in December 2016 from their headquarters airport of Chicago O’Hare International Airport (ORD), United's Polaris class is the only premium cabin the airline offers. That shouldn’t deter you from flying aboard the product: it is considered one of the best premium cabins among the three American international airlines.

On the ground, Polaris flyers have access to the Polaris lounges, available only to Polaris-cabin flyers. Available at select airlines, these lounges feature special dining and bar service curated by local chefs and bartenders, as well as daybeds and spa services. Of course, showers are also available for flyers to freshen up before or after a flight.

Aboard the premium cabin, United Polaris features fully lay-flat seats featuring bedding from Saks Fifth Avenue. Flyers can select meals from a menu designed by chefs from The Trotter Project. Each seat transforms into a 1.98-metre bed, allowing flyers to sleep during their flight. When you are awake, you will also have access to an in-flight entertainment centre, complete with power outlets.

As the Premium Economy offering aboard international flights, United offers limited Premium Plus seating on select aircraft. The Premium Plus seat offers more legroom and a wider seat compared to Economy, but the seats are not lay-flat. Expect to have around one metre of pitch between seats.

In Premium Plus you will receive upgraded meals from the Economy section, along with complimentary beer, wine and spirits. Comfort items like pillows from Saks Fifth Avenue are available to flyers, along with noise-reducing headphones, dedicated power outlets and extra storage space.

United’s Economy section is split into two sections: Economy Plus and regular Economy. The only difference is the legroom: Economy Plus offers a little more legroom than regular Economy seats. Flyers can expect regular airline seats in a 3-4-3 layout across the aircraft. Each row features power outlets and in-flight entertainment screens on each seatback.

As the name implies, the lounge is an upgraded experience from the traditional one. Flyers have access to a number of enhanced amenities, including spa services, showers and day beds for rent by the hour. The menu at each location is different, inspired by local chefs and bartenders with signature cocktails at each location.

There are five United Polaris lounges in the world, and they are all located at United Airlines hub airports:

For all others, the United Club is the airline’s primary lounge offering. The carrier operated 50 lounges across 45 airports in six countries, including their most popular airports. Flyers can find the lounges in Guam, Tokyo Narita Airport, Hong Kong and many other United destination airports.

To enter a United Club, you must fall into one of the following categories:

If you don’t qualify for lounge access, you can purchase a one-time entry pass for $59 at clubs or through the United Airlines mobile app. Once inside you will get complimentary bar service, beverages and light snacks before your departure. You can also get free wireless internet access, and some lounges offer private phone booths with phones.

Frequent flyers can earn status by flying with United Airlines or Star Alliance partners when they credit flights to their United MileagePlus account. International travellers don't need to worry about making qualifying spending towards elite status: the Premier Qualifying Dollar spend requirements only apply to flyers who live in the 50 United States or Washington, DC.

United MileagePlus Premier status has four different levels, depending on how much qualifying you do within the program. 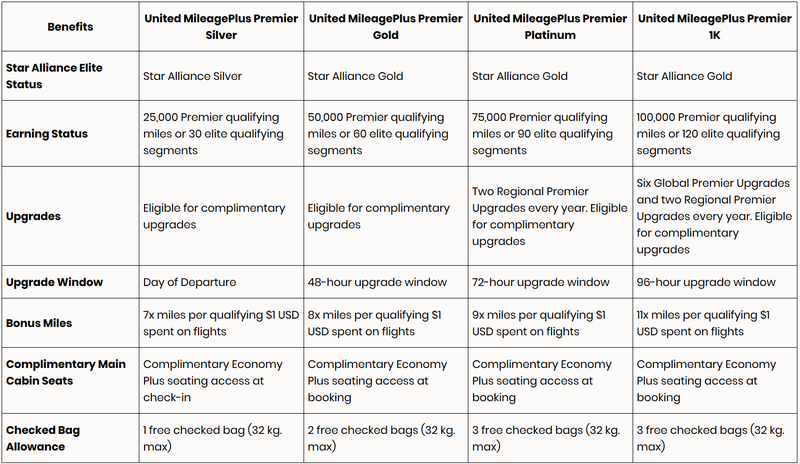 In addition to flying, United flyers can also purchase miles directly from the airline. The rate for miles is $70 USD for 2,000 MileagePlus miles, with a minimum 2,000-mile purchase. The airline also offers bonus miles for more purchased. The current bonus levels are:

United offers points-earning credit cards to flyers around the world, focusing on their network. If you qualify to apply for credit cards in the United States, Japan, Guam and Saipan, or Hong Kong, you could get a credit card that earns United Airlines miles with each purchase.

Currently, United does not offer a miles-earning credit card to Australian flyers. But CommBank Awards  can be transferred to the United Airlines MileagePlus program. The current transfer ratio is 4:1 – four CommBank Awards points for every one United MileagePlus mile.

As with other programs, the United MileagePlus Shopping mall is not available to Australian flyers. According to the terms, the portal is only available to legal residents of the United States or its territories. But you may qualify for mileage bonuses through the United Airlines website. To see what current offers are available, visit the MileagePlus deals and offers page.

As part of the Star Alliance program, United frequent flyers can use their miles for flights on all 28 partner airlines. Most are available for booking on the United Airlines website. Simply log in to your account, and search for award space available on United and their partner airlines.

Some awards may be easier to find than others. For instance, while Thai Airways awards may be available, you may have to call United Airlines to get the most current award space. Some of the best uses of United MileagePlus miles include:

Because of their large reach through the Star Alliance, United MileagePlus miles offers a valuable alternative to Australian frequent flyer programs. United doesn’t require international flyers to spend money to earn elite status, so this program could offer a lot of value – especially if you primarily fly Star Alliance airlines. In addition, through the CommBank partnership, flyers can earn even more points by transferring CommBank Awards points.

However, earning United Airlines points is only worth it if you primarily fly long-haul flights and consolidate among the airline’s partners. If you aren’t a regular Star Alliance flyer, you may want to consider another program that rewards you better for your continued loyalty.