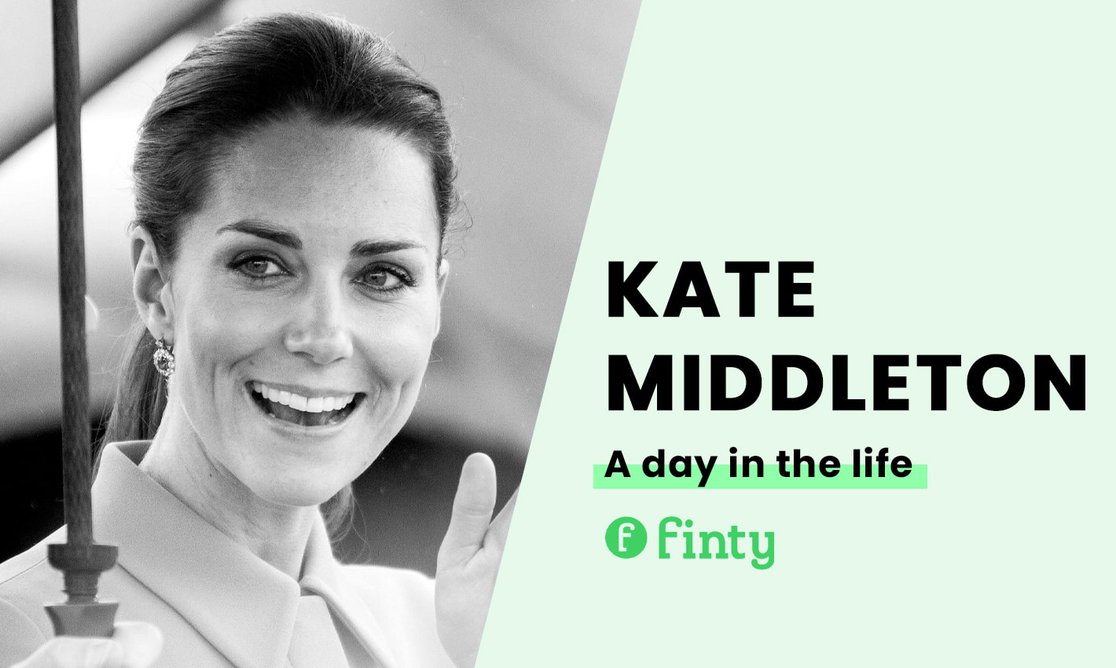 On April 29, 2011, the Royal family welcomed Kate Middleton to its ranks after her marriage to Prince William in a spectacular ceremony at Westminster Abbey.

Queen Elizabeth II bestowed upon Kate Middleton the title of Catherine, Duchess of Cambridge. Kate gave birth to three children: Prince George, on July 22, 2013; Charlotte, on May 2, 2015; and Louis, on April 23, 2018.

With a simple background as a commoner, she quickly adapted to her new life of public duty. Let's look at the daily routine of the Duchess of Cambridge.

A day in the life of Kate Middleton

Kate wakes between 6:30 am to 7 am each morning, then gets the kids up to prepare them for the day at school. She’ll give the kids breakfast while she prepares herself a green smoothie for her morning meal — normally comprised of raw vegetables like spinach, kale, and spices such as coriander and turmeric.

She gets dressed without a Royal dresser's assistance — The Queen has three — and prefers to shop for clothes herself. When she’s ready, she rounds up the kids and takes them to school.

After dropping the kids off at school, Kate will head out to do whatever errands need to be done. Surprisingly, she does all her shopping herself, even though she’s a duchess.

She uses her mornings to buy food for the family's daily meals at one of the upmarket grocers on Kensington High Street. Although independent, she has a bodyguard detail following her discreetly as she wanders through the supermarket aisles.

After returning from the shops around 10:30 am, Kate will unpack her purchases and then get ready to hit the gym. Kensington Palace has a fully equipped gym with everything she needs, but Kate prefers getting out into the fresh air.

She’ll either take a run near the Palace or go for a walk with Lupo, the family dog. She is known to take Lupo for up to three walks per day, either in the park or in the Palace gardens.

Kate picks the kids up from school and returns home for lunch. She says she wants to raise well-mannered, humble children, so they often spend the afternoon running around the garden. If William is home, she’ll spend time with him in the afternoon before preparing dinner for the family in the evening.

As a Royal patron, Kate does a lot of work for children’s charities, such as Prince Charles’s children’s charity and East Anglia Children’s Hospices. Her Royal responsibilities are typically fulfilled in the afternoon (and sometimes extend into the evening).

If she doesn’t have any Royal obligations, she might spend her afternoon puttering and making preparation for the family's evening meal.

If she feels like some activity in the afternoon, she’ll meet up with friends at the Harbour Club, in Chelsea, where she’ll play some tennis or take lessons with her coach.

In the evening, Kate will prepare supper and serve it at around 6 pm. Roast chicken is William's favorite of her many homemade dishes.

After dinner the Royal couple occasionally venture out to the local pub, the White Eagle, for a drink. William enjoys a pint of bitter, and Kate sips in some white wine.

Most nights, however, the couple stays home. Once the kids are in bed they'll watch a movie or relax and talk about the day's events. On most nights, Kate and William are in bed around 10:30 pm.