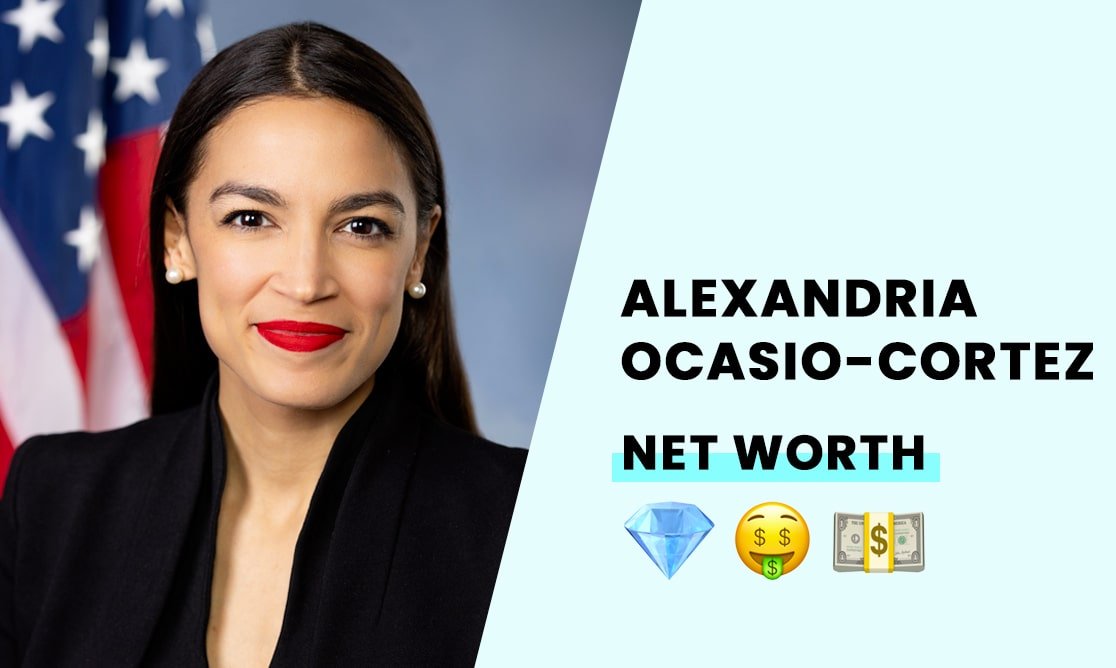 The estimated net worth of Alexandria Ocasio-Cortez is $500,000.

The outspoken progressive politician is in favor of all the usual Democrat platform policies: big government spending, various social reforms, open borders, taxing the rich, and the climate change agenda.

Alexandria Ocasio-Cortez, the U.S. Representative, was born on October 13, 1989, in Bronx, New York.

Her mother was called Blanca and her father, Sergio, was an architect.

She has one sibling and grew up in Westchester County, New York.

When AOC is not working in Washington, she lives in Navy Yard, New York, with her partner Riley Roberts.

How did Alexandria Ocasio-Cortez build her net worth?

Alexandria Ocasio-Cortez started her working life as a bartender and lived paycheck to paycheck through most of her 20s.

She became more involved with politics and got her big break when she managed to unseat a fellow Democrat in a safe blue New York seat.

AOC joined the House of Representatives in 2019 to become Rep. Alexandria Ocasio-Cortez (D-NY).

As with most people, her primary wealth builder has been her income. AOC receives an annual salary of $174,000 as a member of Congress.

House and Senate members last received a raise in earnings in 2009 of just 2.9%, before AOC even stepped on the House floor.

AOC's financial disclosure reports with the House show little to no net worth.

So, in her case, she would have more liabilities than assets, giving her a negative net worth.

AOC's second report on September 2020 covered 2019 and shows more or less the same financial picture in assets and liabilities, with no real change.

According to the filings, AOC's current assets are no more than $30,000.

Considering her $50,000 in student loan liabilities, it’s most likely that AOC will have a positive net worth.

However, she’s yet to file for recent years, and we imagine her net worth has improved significantly since previous filings.

Ocasio-Cortez sits on the powerful House Financial Services Committee and was one of the key names supporting the Ban Conflicted Trading Act 2021, which would "prohibit Members of Congress from purchasing or selling certain investments, and for other purposes." Bitcoin would be included, an asset that AOC claims not to have invested in.

Long-time Democrat politicians such as Nancy Pelosi have actively traded stocks, including Apple, Microsoft, Facebook, and Google, allegedly using their knowledge of unannounced policies and regulatory changes to outperform the market.

I am a member of Congress. Members of Congress have access to very sensitive security clearances, access to very detailed, tailored briefings. Our job is to try to anticipate and legislate for what we see is coming. We should not have the ability to both have access to that information and to hold and trade in individual stock.

Speaking to Yahoo! Finance in 2022 about members of Congress and the Senate engaging in unethical insider trading.

How rich is Alexandria Ocasio-Cortez?

Mainstream media and political media outlets such as PolitiFact have helped to paint her as a humble, relatable, working-class hero fighting for America's poor in the halls of power.

For obvious economic reasons, the right slams her for being a Socialist and proposing a potentially ruinous Green New Deal policy.

Others have insinuated that AOC is in the pocket of Big Tech companies due to her featuring heavily in the 2020 Netflix feature documentary "Knock the House Down," said to have cost $10 million.

In reality, we don't know how rich AOC is. Her net worth probably ranges between $500,000 and $1 million, which is modest for a junior politician but healthy for anyone in her age bracket.

How much does Alexandria Ocasio-Cortez make per day?

Asides from any other source of income that she may have, her $174,000 salary from Congress makes her $476 per day.

Is Alexandria Ocasio-Cortez a millionaire?

No, AOC is probably not a millionaire.

However, if she stays in politics long enough and develops financially like her colleagues, such as Chuck Schumer, she'll become a millionaire in a few years.

Her upbringing was a modest working middle-class background in Westchester County, NY. Her family is of Puerto Rican heritage.