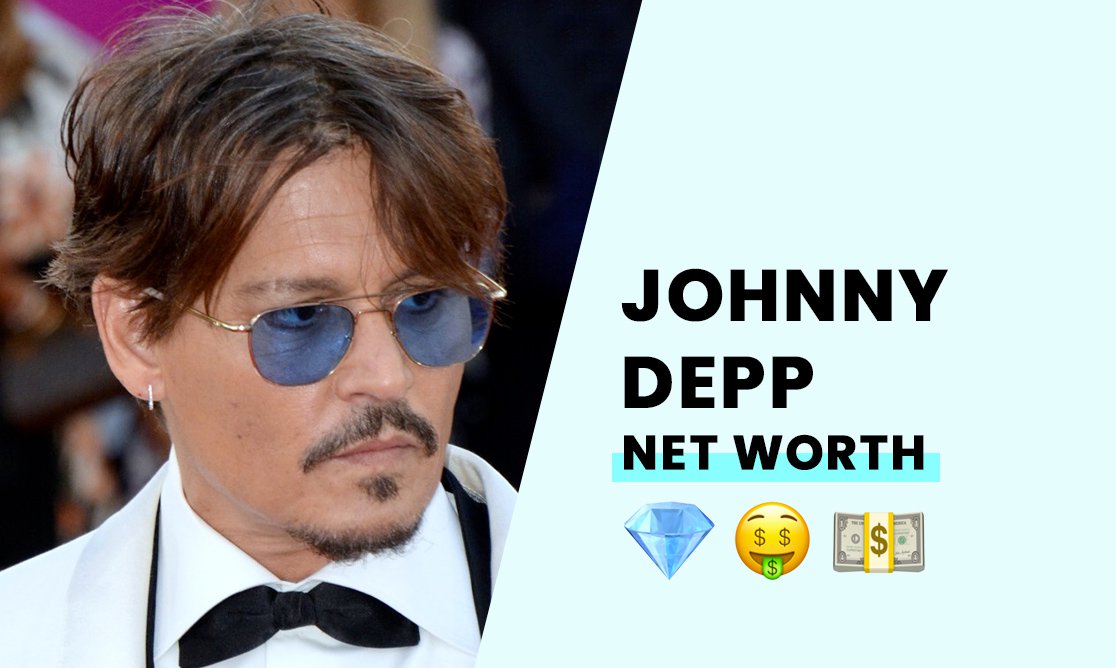 The estimated net worth of Johnny Depp is $150 million.

The actor reportedly earns $20 million per film and is the star of the "Pirates of the Caribbean" franchise, where he plays Captain Jack Sparrow.

Johnny Depp's films grossed over $3.4 billion at the American box office and more than $8.7 billion worldwide.

Depp is one of the highest-paid actors in Hollywood, with his salary topping more than $100 million per year during the peak of his Hollywood career.

In 2022, Depp won the defamation case between him and his ex, Amber Heard.

Born on June 9, 1963, in Owensboro, Kentucky, John Christopher Depp II is the youngest of four children. Depp's family moved around a lot when he was young, eventually settling in Miramar, Florida. Depp received a guitar for his 12th birthday, sparking his interest in music.

Depp attended Henry D. Perry Middle School and Miramar High School, before dropping out to pursue a career as a musician. Johnny returned to school two weeks later, but his principal told him to pursue his dreams rather than return to class.

Depp relocated to Los Angeles with his band, "The Kids." However, the band would split shortly after arriving in the city. Depp met Nicholas Cage, who convinced him to chase a career in acting. The rest is history.

How did Johnny Depp build his net worth?

Johnny Depp built his wealth through his career as one of Hollywood's biggest film stars. Johnny landed his first role in the 1984 Wes Craven horror, "A Nightmare on Elm Street." However, the actor got his big break in the 1990 Tim Burton classic, "Edward Scissorhands."

Johnny also has a successful role in the TV show "21 Jump Street," where he reportedly earned $45,000 per episode. He starred in several Hollywood films before landing his role as Captain Jack Sparrow in the "Pirates of the Caribbean" franchise.

Johnny's notable Hollywood roles include the Tim Burton remake of "Charlie and the Chocolate Factory" in 2004 and Burton's animated movie "Corpse Bride" in 2005. Depp featured in "Sweeney Todd: The Demon Barber of Fleet Street" in 2007, winning the Golden Globe for Best Actor. The film also saw him receive his third nomination for an Academy Award.

Johnny continued his work with director Tim Burton, becoming a mainstay in the casting of his films. He appeared in the movie "Alice in Wonderland" in 2010 and "Dark Shadows" in 2012.

Deep earned hundreds of millions during his career. However, the actor has a spending problem. He reportedly averaged around $2 million per month in expenses, seeing his net worth drop dramatically due to the cost of maintaining several large properties around the globe.

Depp says he earned success through his desire to achieve his dreams. While he was uncertain about his future when moving to LA, he credits Nicholas Cage with mentoring him for his movie roles.

How rich is Johnny Depp?

With a reported fortune of $150 million, Johnny Depp is one of Hollywood's most successful male actors. He ranks among a group of top earners that includes Brad Pitt, Bradley Cooper, Dwayne Johnson, Mark Wahlberg, Robert Downey Junior, and Tom Cruise.

How much does Johnny Depp make per movie?