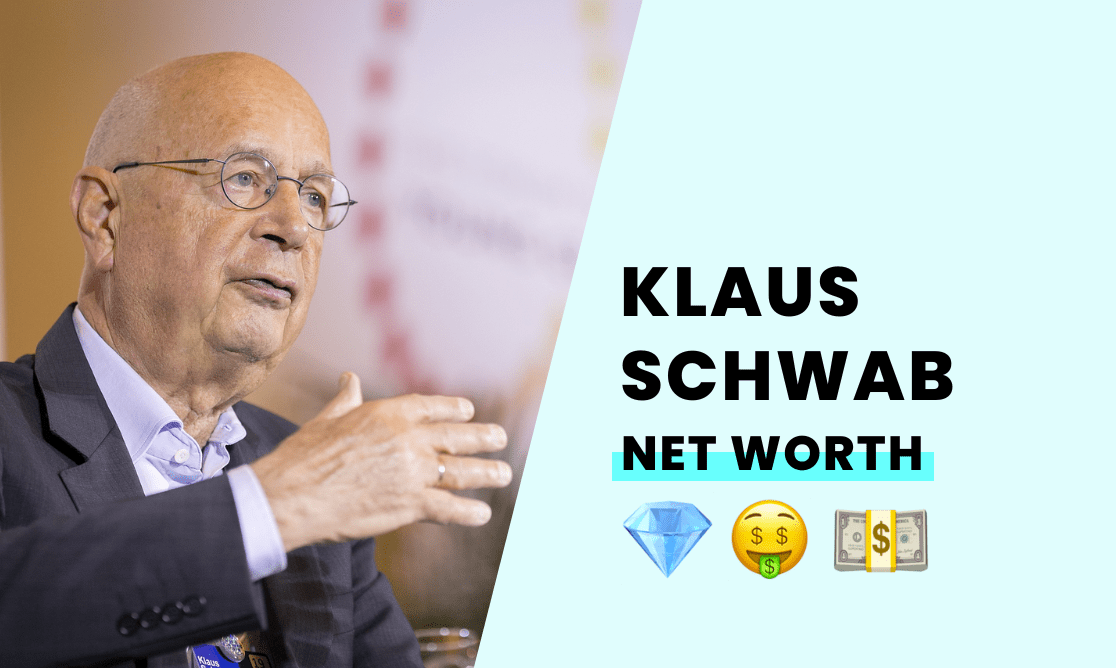 Klaus Schwab's net worth is estimated to be as much as $25-100 million.

For decades, the Davos Chief has been at the center of bringing together the world's richest and most powerful in business and politics.

But the true extent of his wealth is unclear. Is he modestly well-off or secretly very wealthy?

Who is Klaus Schwab?

His career began as a professor in Switzerland. In fact, he was the youngest professor in the country. He taught business and economics policy to students from 1972 until 2003.

His teaching salary was a modest $65,000 per year, while salaries from his board positions varied depending on the company. His book sales pay out regular royalties even today.

He lives and works in the expensive Cologny suburb of Geneva, Switzerland.

The founder and executive chairman of the World Economic Forum is a controversial figure.

To some, Schwab is a misunderstood hero.

To those skeptical of the WEF's intentions, Klaus Schwab is an evil mastermind leading the world down a path toward a dystopian future.

During the dark days of COVID lockdowns in 2021, Schwab's WEF sent chills worldwide with an ominous prediction via social media that by 2030 "You'll own nothing. And you'll be happy."

What Klaus Schwab thinks is no secret. He has given countless speeches and interviews over the years in his iconic thick German accent.

Each year the WEF publishes an annual report. Schwab has authored five books, including "The Fourth Industrial Revolution" (2016) and the notorious "COVID-19: The Great Reset" (2020).

He championed the rise of stakeholder capitalism – profits with a purpose – an approach that goes hand in hand with the United Nations ESG criteria.

Prominent critics of ESG like the world's richest man Elon Musk and conservative commentators like Glenn Beck have ruffled the feathers of the WEF faithful, blasting ESG as a scam and a purity test for "the leftist agenda."

What is the WEF?

Founded in 1971 by Schwab as the European Management Forum, it wasn't long until its scope increased and it became the World Economic Forum. It's stated aim? "Improve the state of the world."

The WEF sees itself as an integrating force in world affairs, bringing people, power, and ideas together.

The Geneva-based forum brings together the world's elites. The most powerful heads of state, global policymakers, and billionaires come together for multiple summits and its annual Davos event.

To casual observers, the yearly gathering of the world's elite at Davos seems harmless enough. It's a networking event in the snow-covered mountains of Switzerland for the world's wealthy. Such a conference is only of interest to political wonks and banking executives reading which way global winds are blowing, right?

Over five decades, it has become a prestigious global organization that has trained and shaped many politicians and heads of state.

How is the WEF funded?

The WEF is a not-for-profit that makes money by charging membership fees and participation fees for events and programs.

In 2019 it employed over 800 people, generated revenues of $344 million, and had assets of $596 million on the balance sheet. A further $345 million of funds sits in the WEF's Foundation Capital and Reserves and Restricted Funds.

Major global companies pay hundreds of millions every year to be "Strategic Partners."

And then there are the donors. The Bill & Melinda Gates Foundation and the Wellcome Trust have been major donors to the WEF.

Over the decades, the governments of Switzerland, Germany, Japan, and Norway have funded the WEF to the tune of hundreds of millions of dollars.

Tickets to attend the annual Davos conference cost an eye-watering $19,000 per person.

The WEF is tax-exempt status in Switzerland.

How did Klaus Schwab build his net worth?

Klaus Schwab has been at the forefront of global business, steering WEF for 50 years and earning a high salary along the way.

He retains ownership over a significant portion of the WEF.

His family home, located at the end of the driveway of the WEF's headquarters in Cologny, Switzerland, is estimated to be worth around $11 million.

Schwab is also believed to have accumulated a large portfolio of investments.

How rich is Klaus Schwab?

The extent of Klaus Schwab's personal wealth is unclear. The lack of transparency is one of the things he's been criticized for over the years.

Finty estimates his net worth could be as much as $25-100 million.

There's simply no way that a man running a global organization of this size and prestige for 50 years is not personally very wealthy.

Is Klaus Schwab a billionaire?

It is unknown whether Klaus Schwab is a billionaire. Our estimates place Klaus' net worth in the tens of millions.

What is Klaus Schwab's salary?

WEF ringleader Klaus Schwab reportedly is on a salary of approximately US$1 million (one million Swiss Francs), an amount not uncommon for top executives at WEF.

Who is Klaus Schwab's WEF successor?

Given Klaus Schwab is aging, who will succeed him? In various interviews, Klaus says his successor may be one of his family if they want to be involved, or it may be someone else from within the WEF organization.

Yes, he is most likely a distant relative since they share the same family name through a common ancestor and marriage.

However, Klaus Schwab of the WEF is not a close family relative to Charles R Schwab, the American billionaire owner of the Charles Schwab Corporation, the low-cost stock brokerage company.

Nor is Klaus Schwab a close relative of Charles M. Schwab, the 19th-century American mining magnate.