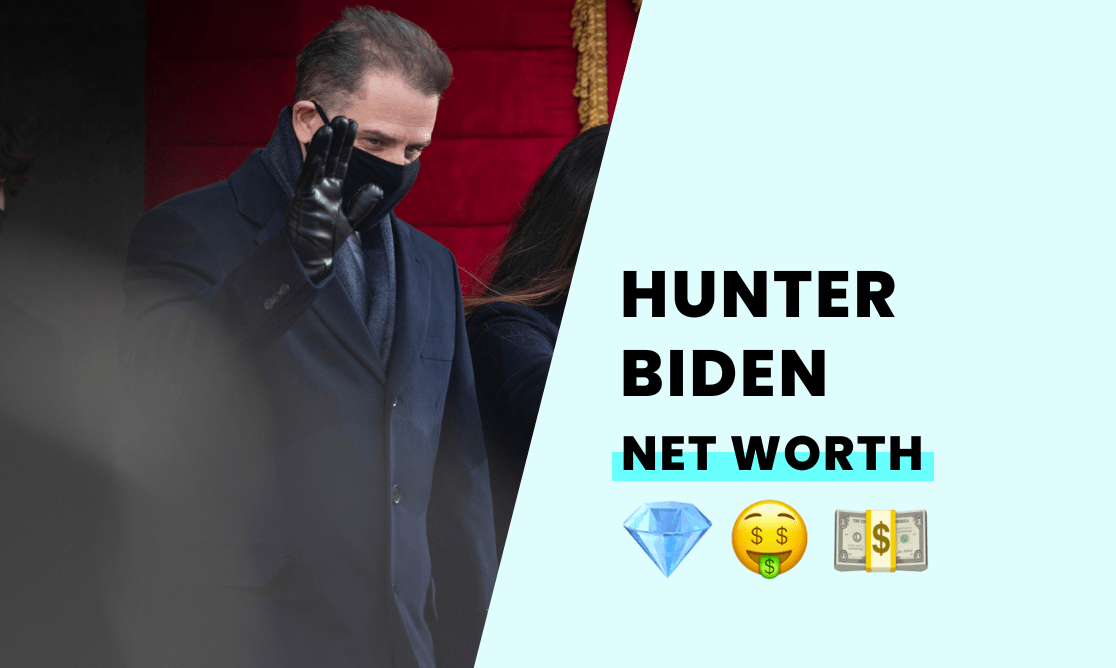 Hunter Biden's net worth is estimated to range from $1 - $20+ million.

The son of President Joe Biden is a controversial figure.

There are two phases to Hunter Biden's career: the legal phase and the reportedly illegal phase.

His legal phase began in corporate America, progressed into lobbying in Washington D.C., and finally ended up in hedge funds.

The alleged illegal phase came later when his father, Joe "The Big Guy" Biden, served as Vice President in the Obama administration.

Hunter Biden is under federal investigation for his influence peddling.

How did Hunter Biden make money?

Hunter Biden started as a consultant at MBNA shortly after graduating from Yale in 1998. He would become the Executive VP.

By 2001 he got bored and left MBNA to join the U.S. Department of Commerce during the Clinton Administration.

Following this stint inside Government, he became a lobbyist on Capitol Hill and founded his lobbying firm.

In 2006, Hunter was appointed to the board of directors of Amtrak for 5 years by Republican President G.W. Bush.

Hunter and his uncle bought the Paradigm Global Advisors hedge fund in 2006, of which Hunter served as the CEO until 2011.

He then launched Seneca Global Advisors in 2011. He and two others founded an investment firm and a venture capital firm, and he maintained a position at a law firm until 2014.

He has been known to have received payments from various sources totaling around $4 million, assumed to be for lobbying.

From 2013 up until 2020, Hunter was on the board of private investment fund BHR partners.

Aside from his investments, he has holdings with several local and foreign companies.

He now dabbles in art and shows his work in private viewings.

More recently, Hunter penned his 2021 book – "Beautiful Things: A Memoir" – for which he is thought to have received a $2m advance from publisher Simon & Schuster.

In early 2019, Hunter Biden dropped off his water-damaged laptop at the now defunct "The Mac Shop" in Delaware. Since Biden failed to pick the laptop up, it became the business owner's property.

This laptop turned out to be a hidden cache of documents, emails, and messages evidencing Hunter's dealing with foreign companies and some of the scandalous things he got up to in his personal life.

Hunter Biden's laptop is real, but the implications of what it contains have been denied, downplayed, and disputed.

Hunter according to Democrats

The official line from Hunter Biden himself, his father, the Biden White House, and the Democratic Party is that he was a talented lawyer who has battled to overcome his drug and alcohol addiction.

They maintain that Hunter and his father, President Biden, have done nothing illegal regarding lobbying or international business deals.

Furthermore, they assert that the mainstream media and Big Tech did nothing amiss in burying the story during the run-up to the 2020 Presidential Election.

Hunter according to Republicans

According to former President Trump, many people on the Republican side of politics, and conservative media, the Biden family — Hunter Biden, his father Joe, and uncle James — are up to their eyeballs in swampy influence-peddling, which has netted them tens of millions of dollars.

They allege that Hunter Biden is not only guilty of scandalous behavior involving drugs, alcohol, and loose women, but that he and President Biden have been given a free pass by the mainstream media and Big Tech, ultimately costing Trump the election.

Pointing to Trump's treatment throughout his tumultuous term, they argue the story would never have been buried had a similar scandal broken about one of Trump's adult children.

How rich is Hunter Biden?

It's hard to say with any precision how rich Hunter Biden. His net worth is probably somewhere between $1 million and $20 million, depending on the veracity of the allegations made against him.

Is Hunter Biden a millionaire?

Yes, Hunter is probably a millionaire.