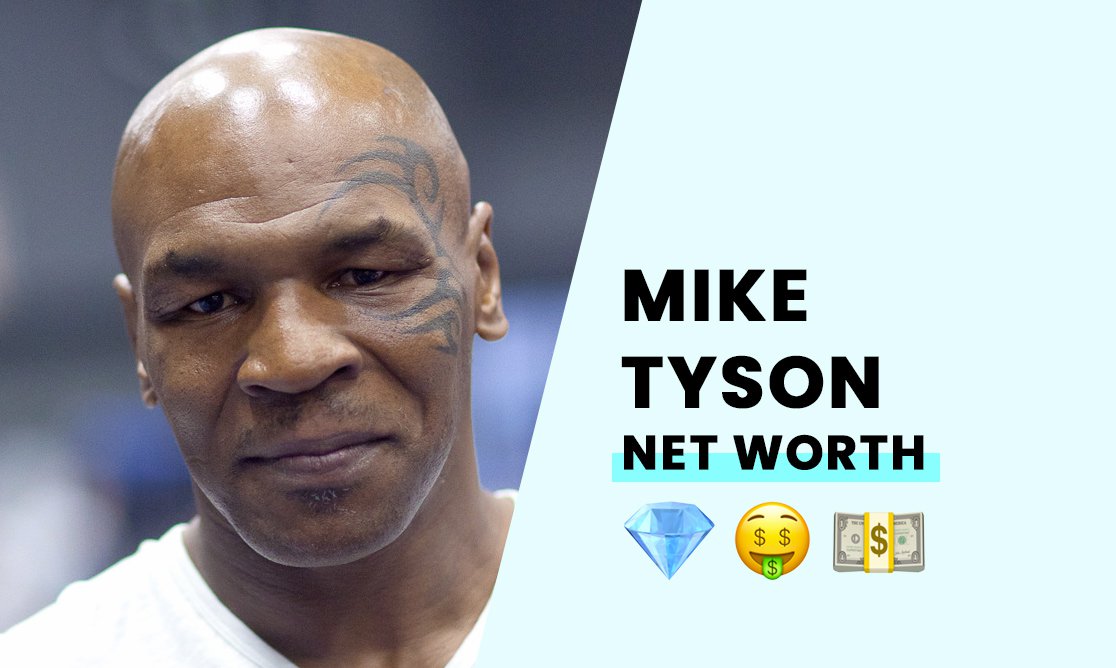 The estimated net worth of Mike Tyson is $13 million.

Up until his fight with Roy Jones Junior, "Iron Mike" had a net worth of around $3-million. Tyson is one of the most-revered heavyweight boxers of all time, and he returned to the ring in 2021 for exhibition matches.

"Iron" Mike Tyson was born on June 30, 1966, in the ghetto of Brownsville, Brooklyn, New York. Mike had two siblings, Denise and Rodney, but Denise passed away from a heart attack when she was just 24 years old.

Tyson's biological father is Purcell Tyson. However, Mike grew up under the care of Jimmy Kirkpatrick. However, Kirkpatrick would abandon the family during Mike's early years, and his mother passed away when he was 16.

Mike ended up going into foster care, where he met the legendary boxing trainer, Cus D'Amato, who took the young Tyson under his wing, teaching him the skill and art of boxing. Legend has it that Mike's first street fight occurred when he saw an older and larger boy rip the head off a pigeon.

Tyson was a troublesome youth, with over 38-arrests by age 13. However, meeting Cus changed his life, setting Mike on the path to heavyweight success in the boxing ring.

Tyson attended the Tryon School for Boys in Johnstown, and he ended up dropping out of high school to pursue a career in boxing.

How did Mike Tyson build his net worth?

Mike Tyson was the undisputed boxing world heavyweight champion, holding the record for the youngest boxer to win the heavyweight title, at 20 years, 4 months, and 22 days old.

Tyson was also the first-ever heavyweight to simultaneously hold the WBC, WBA, and IBF titles and the only heavyweight, to unify the belts. Tyson competed in the Junior Olympics, winning a gold medal, and turned pro at 18.

Mike was a terrifying opponent, and it took him longer than necessary to become the champ because no one wanted to fight the knockout artist. Mike won 26 of 28 fights by KO or TKO, and many boxing experts view him as the greatest heavyweight of all time, alongside Muhammad Ali. He will go down as one of the sport's most outstanding — and fearsome — fighters, alongside Floyd Mayweather, Manny Pacquiao, and Tyson Fury (named after him).

While Tyson netted millions throughout his career, his relationship with Robin Givens destroyed the boxer's wealth and mental health. Many boxing enthusiasts say Mike would have been the greatest ever if he had never met her.

Mike returned to the ring in 2021 for an exhibition match with Roy Jones Jr, landing him a $10 million purse and quadrupling his wealth overnight. We expect him to make even more from his fight with influencer Logan Paul.

Mike says he owes his life and boxing career to the late Cus D'Amato. Mike says that if Cus was around to help him deal with the success as heavyweight champ, his life might have taken a different trajectory.

How rich is Mike Tyson?

With an estimated net worth of $13 million, "Iron" Mike Tyson continues to grow his wealth through investments in cannabis ventures and exhibition boxing matches.