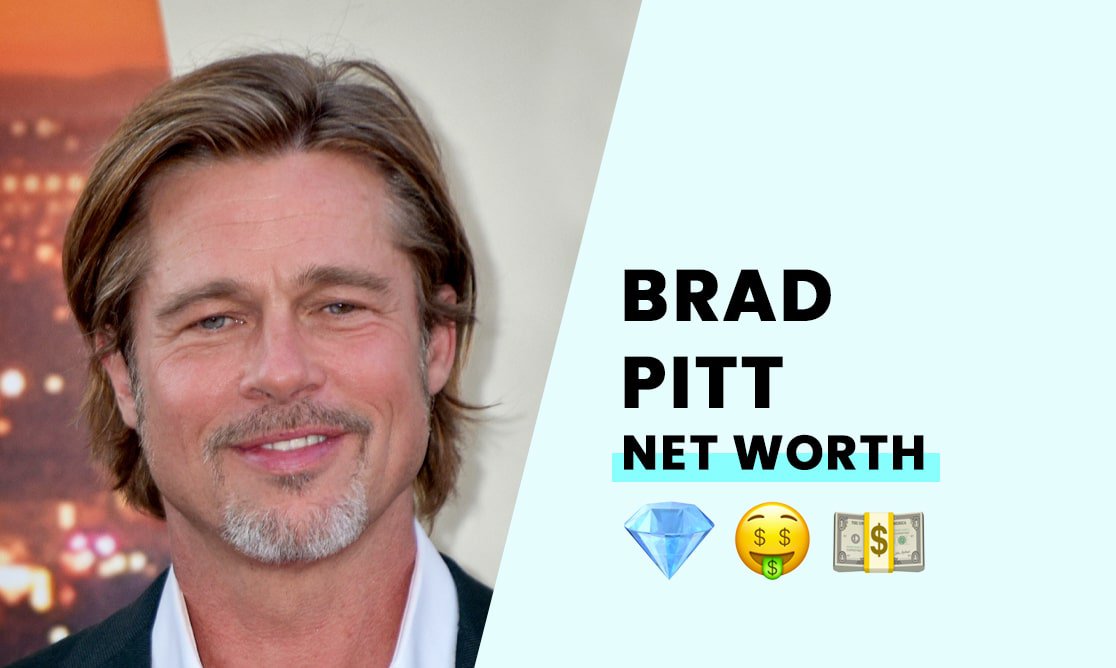 The estimated net worth of Brad Pitt is $300 million.

Brad Pitt is one of the highest-earning members of the Hollywood A-list, and he has a reputation as one of the most sought-after actors in the entertainment industry.

Brad consistently earns $20 million per movie and has several Academy Award nominations and an Oscar for best picture in 2014 and best supporting actor in 2020.

Born on December 18, 1963, in Shawnee, Oklahoma, William Bradley Pitt spent his youth growing up with his siblings in Springfield, Missouri.

Brad attended the University of Missouri, majoring in journalism and advertising. While attending college, Brad decided to try his luck as an actor, dropping out of school to move to Hollywood just two weeks before graduating.

How did Brad Pitt build his net worth?

The following year, Brad would double his earnings with a $10 million payday for "Sleepers." He kept this pay ceiling with his role in "7 Years in Tibet" the following year. However, Brad increased his pay grade to $17.5 million for his parts in Meet Joe Black, Spy Game, Fight Club, and Troy.

Brad's earnings continued to climb, netting him $20 million for his role in "Mr & Mrs. Smith," but the actor cut his asking salary in half after a chance to work with the legendary producer, Quentin Tarantino. He went on to earn $ 10 million for each role in "Inglorious Basterds" and "Once Upon a Time in Hollywood."

He kept this salary for his role in "Ocean's Eleven" in 2001 as a chance to be a producer in the film. After the film's box office run, Brad earned a total of $30 million from the film. Across the three "Ocean's" movies, Pitt starred alongside the likes of George Clooney, Julia Roberts, Matt Damon, Don Cheddle, Bernie Mac, and Al Pacino.

Brad earned the bulk of his wealth through his producer roles in coming movies and more than he made during his career as an actor. Brad Pitt married Jennifer Aniston in 2000, with the couple divorcing in 2005. Brad married actress Angelina Jolie in 2014, separating from her in 2016 and filing for divorce in 2019.

A significant portion of Brad Pitt's wealth is invested in real estate in the United States and worldwide. His primary residence is in Los Feliz, Los Angeles, but he is believed to own property in the Hollywood Hills, New Orleans, Missouri, and France.

Brad believes in chasing his dreams. He says he likes to act quickly on his decisions, and if he believes in a project, he goes all in to ensure its success.

The actor believes in his talent, and he says that one of his defining moments was when he received his first paycheck in Thelma & Louise when he said he felt like a real Hollywood actor, and he was certain of his coming success.

How rich is Brad Pitt?

With a fortune of $300 million, Brad Pitt is one of Hollywood's most successful and sought-after actors. As his career as a producer continues, we can expect to see his wealth grow.