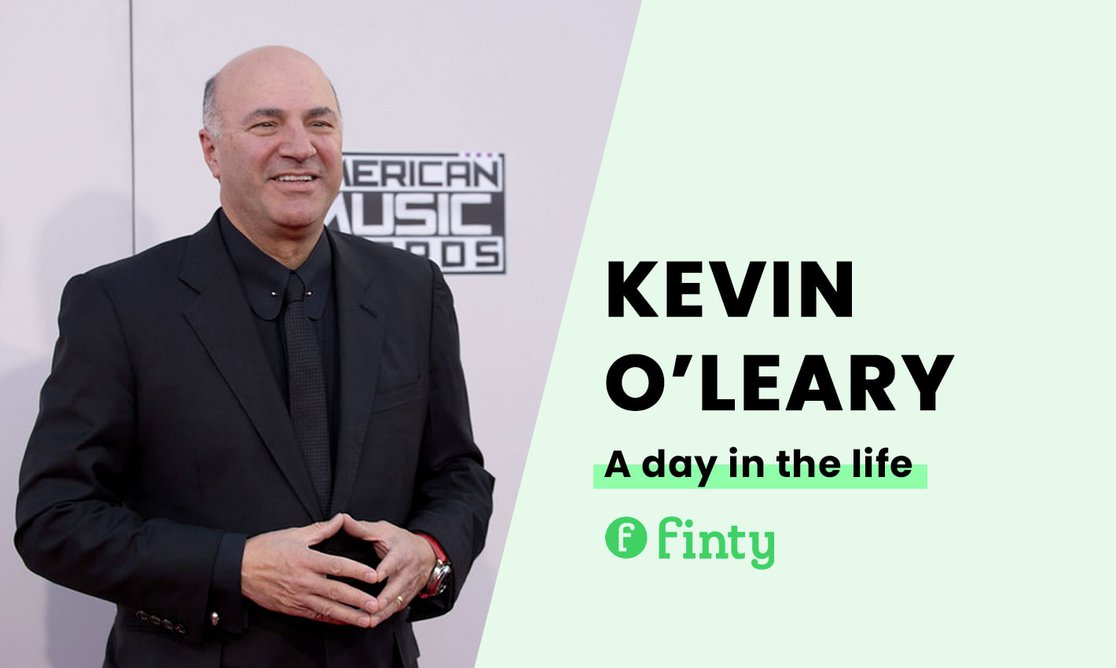 It's a wonderful life for Kevin O'Leary, or "Mr. Wonderful" as he is often called. Known for his role on the business reality show "Shark Tank," O'Leary is an entrepreneur and founder of Softkey Software Products, which he sold to Mattel in 1996 for the hefty sum of $3.7 billion.

Kevin took his profits and started the investment firm O'Leary Funds. The company manages the investments he makes in the deals he signs in the Shark Tank and the Dragons Den.

He also owns a winery — O'Leary Fine Wines — and has a best-selling book series that teaches financial literacy. His businesses all comply with Kevin's principles of directness and honesty.

O'Leary certainly is a colorful figure on The Shark Tank, complementing the other titans that sit around the deal-making table. So what does the daily routine of this shark look like?

After waking up at 5 am, he'll put in a workout on the elliptical machine at home while watching the early morning international business news on CNBC, looking for any trends developing in the EU that might translate to American markets.

The workout takes an hour, and he tries to burn at least 500 calories. He may use this time to also read reports from his many companies.

After exercising, he’ll stretch until around 6:30 when he’ll head back upstairs to his dressing room to shower and get dressed in his signature outfit — a black suit, white shirt, and black tie — for the work day.

Breakfast is usually hard-boiled eggs, which he eats while checking emails. He’ll be in the office around 7 am and works straight through until 10:30 am with no breaks. Mornings are the most productive time of the day for him, so his priority list is ordered to tackle the toughest challenges first.

Kevin gets back from his bike ride at around 12:15 pm when he’ll enjoy a light lunch, which he enjoys cooking. O’Leary says he doesn’t like to overeat during the day and limits himself to 1,700 calories, leaving an allowance for a couple of glasses of wine at night.

After lunch, he settles into the second period of work at 1 pm. Afternoons are used to connect with his companies' CEOs, and he also does a tremendous amount of work on social media for his businesses. This is when he records videos, writes emails, and attends to less important tasks. If he’s recording, he’ll spend the afternoon at the studio.

By 5:30 pm he is catching up with colleagues, talking about the day's events, as well as business news and other personal topics. He spends about an hour on the phone, wrapping up his communications around 6:30 pm.

It's well known that he is a wine aficionado — he does own a wine store after all. He starts the evening with a crisp white Montrachet or Chardonnay at 6 pm, often enjoying his drink outdoors while watching the pelicans fly along the shore.

He has a self-imposed three-drink rule, but often struggles to adhere to it. However, he realizes that drinking too much affects his performance in the following workday.

Kevin will cook dinner himself and enjoys experimenting in the kitchen. His Instagram has plenty of pics of him in his chef's uniform, creating culinary masterpieces in the kitchen.

After wrapping up the evening meal, he enjoys his final glass of wine and retires to bed at around 8:30 pm for an early night. Mr. Wonderful admits he doesn’t like watching TV, and he’ll read a few chapters of a book before turning in for the night.