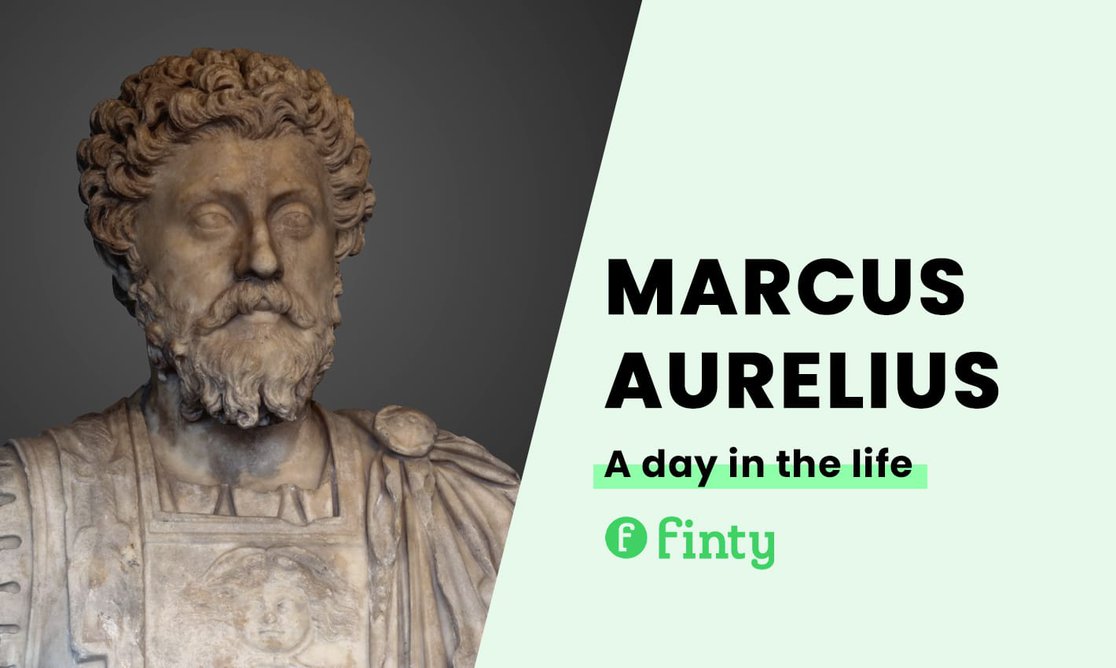 Some two thousand years ago, Marcus Aurelius decided to put pen to paper to collect his personal thoughts. The result was a journal titled "To Himself", which is widely available in print and online today, titled “Meditations”.

Marcus Aurelius is often thought of as "The Father of Stoicism". His journal of "meditations" provides readers with a steady flow of life principles, much of which centers on the practice of enduring life's hardships without complaining.

So, what was life like for a Roman Emperor? What lessons can we learn from this historical figure and his approach to his daily grind?

Inside the daily routine of Marcus Aurelius

The daily routine of Marcus Aurelius can be implied from his writing. He led a structured life, making time to pursue his interests, exercise, reading, and self-development.

Marcus Aurelius believed in rising early each day to meet the challenges of life. His writings tell ofhis belief that a man needs a purpose if he is to succeed.

"At dawn, when you have trouble getting out of bed, tell yourself: 'I have to go to work – as a human being. What do I have to complain of if I'm going to do what I was born for – the things I was brought into the world to do? Or is this what I was created for? To huddle under the blankets and stay warm?'" — Marcus Aurelius

This excerpt from Book 5 of Meditations shows the reader that we all face difficulty getting out of bed in the morning. However, if you feel like you're weighed down by responsibility in life, Aurelius notes that you should step back and be grateful for the opportunity you have to work and contribute.

From his work, we can assume that he used the morning as a time of inspiration. He chose to journal his thoughts in the morning while fresh and plan out his day, executing his plan under the guidance of his adoptive father, Antoninus. We can all take a cue from this: start your day by doing the tough tasks and focus on the day ahead.

Aurelius learned the value of focusing on the important things first from his stepfather, Antoninus, who would even go as far as to schedule bathroom breaks so Marcus could work for extended periods uninterrupted.

While Antoninus enjoyed a peaceful reign as emperor, fate was not as kind to Marcus. During his reign, the stoic leader had to contend with the Roman Empire's catastrophes, including a pandemic, wars, and flooding. Managing these issues with the empire took up most of his day, receiving counsel from his senators and trusted allies in government.

However, life wasn't all gloom and doom for Aurelius. The emperor understood the gentle dynamic of the work/life balance, frequently taking time to "achieve stillness" in the afternoons.

To take his mind off his duties, he enjoyed activities including wrestling, horseback riding, and hunting – all of which were popular with Roman elites.

After a heavy day guiding the Roman Empire, Aurelius would relax in his chambers and read. From historical counts, it's clear reading was a massive part of his life.

Experts don't know when, where, or what he would read, but they believe he would read in the evening. Aurelius had a stringent habit of personal development, believing that knowledge accumulated to be true wealth.

There are a few clues throughout his "Meditations" alluding to his reading habits, for example, thanking Junius Rusticus for teaching him to read.

Aurelius was also a devout family man. He tucked his children into bed every night, and his writings convey the importance of children in an age where medical care was haphazard, to say the least. He made time to say goodnight to his kids in the understooding that nothing about tomorrow comes with a guarantee, so it might be the last time he gets to spend with his children.

Aurelius would also use the evening as an opportunity to contemplate his mortality and his purpose, a foundational practice for stoics to this day.