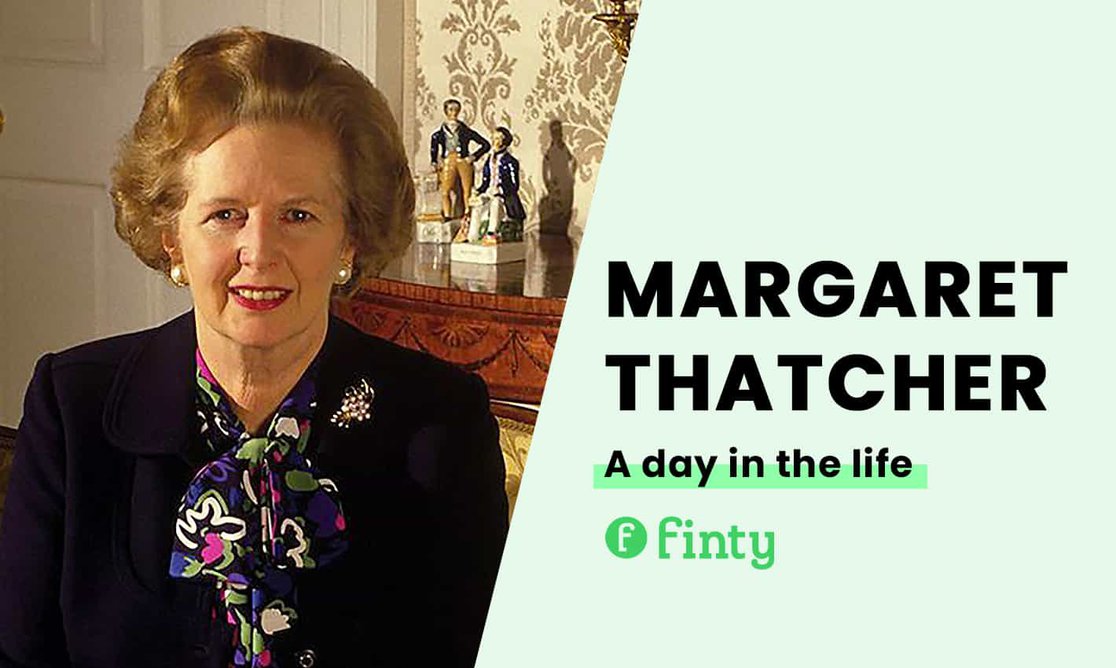 Margaret Thatcher was the UK’s first woman Prime Minister. “The Iron Lady” served the people between 1979 to 1990 as the conservative party leader and PM.

She was a compelling and controversial leader who infamously shut down the entire British coal industry, the fallout from which led to the biggest strike in British history. Within five years of the end of the strike, Britain's coal mining industry had collapsed. Thatcher won.

Her impact was felt on the international stage too. She sent the British Armed Forces into battle in the Falklands War in 1982. After a hard-fought battle, she defeated the Argentinians and regained control over the island chain.

Possibly the most interesting — and certainly the most famous — feature of Thatcher’s day was how she managed to survive and thrive on 4-hours of sleep a night. For most of us, that’s nowhere near enough sleep to remain functional during the day.

She would rise at 5 am every morning and start her day. As Prime Minister, she took her duties extremely seriously, but she also managed to run a household. Throughout the morning, "Maggie", as she was known, would listen to the “Farming Today” show on BBC Radio 4.

Each morning — before leaving to run the country — she would prepare breakfast for her husband, Dennis, and her children. It was unusual for her to eat much in the morning and sometimes skipped breakfast altogether. However, she did enjoy a cup of coffee with a spot of milk and no sugar. When she did opt for breakfast, she would have half a grapefruit with her morning coffee before leaving for the House of Commons at 9 am.

After arriving at the House of Commons, she spent her day in her office, attending to her to-do list for the day. Every morning she was briefed on the latest developments across Britain and the Commonwealth.

When she had completed her morning responsibilities, she would attend meetings and debates in the Commons for most of the morning until lunch.

Lunch was usually at 1 pm. Typically, she ate light, opting for a small portion of meat or fish and a salad. She didn't enjoy lettuce-heavy salads and avoided foods like oysters. While she had no special dietary needs, she did try to eat as little as possible, avoiding sugar, and didn’t eat anything like cake and sweets.

Thatcher once said that she ate light to prevent cognitive fatigue during the afternoon, claiming that a full stomach drew blood from the brain, diminishing mental and physical performance.

In the afternoon she would either attend a second Commons session or meet with world leaders at 10 Downing Street.

Workdays finished at 6 pm when she returned to her modest home at 19 Flood Street in Chelsea, one of London’s most prestigious neighborhoods.

Evenings for Thatcher involved switching her role as Prime Minister to housewife and mother by preparing an evening meal for her family, which was usually around 8:30 pm.

After dinner she would relax with Dennis for a few hours, perhaps watching TV or reading, often along with a whisky and soda (but only one).

As previously mentioned, the most noticeable feature of The Iron Lady's day was how little sleep she got. She slept from around 1 am and rose again at 5 am for a total of four hours of sleep. However, she did get the occasional sleep-in on the weekends when she was at home.

While many modern-day business and political leaders would balk at a 4 hour sleep, Thatcher somehow managed to maintain this schedule for the duration of her time at 10 Downing Street.