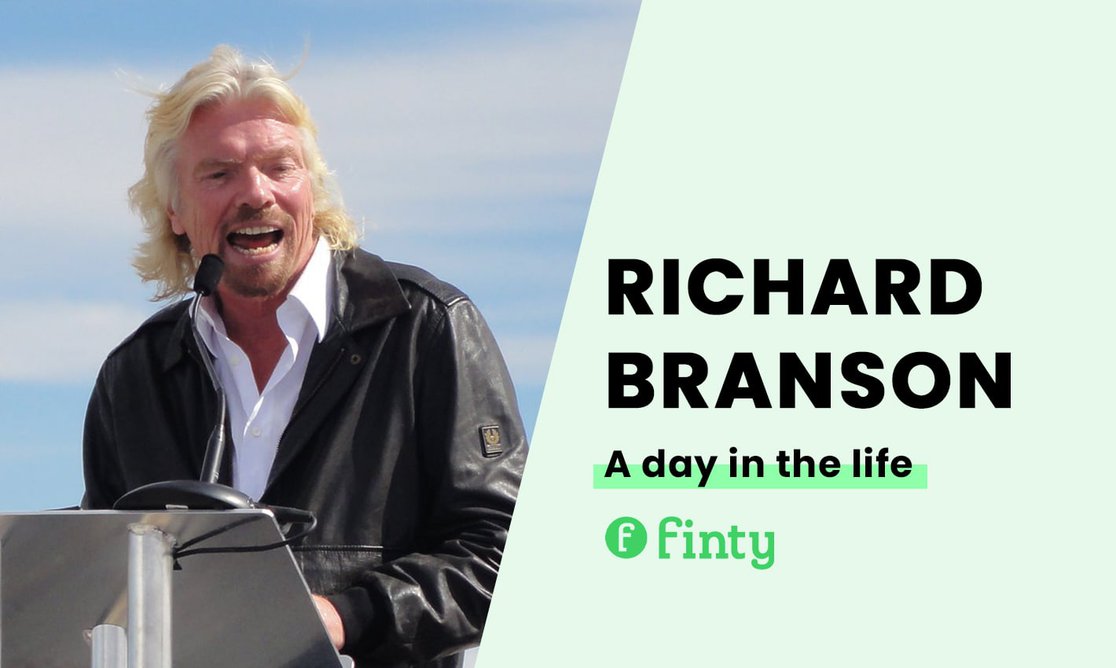 Do you dream of owning a private island? It’s a reality for Virgin boss Richard Branson.

The British billionaire founded Virgin back in 1972, with the launch of the Virgin Records brand. Some four decades later, the Virgin Group consists of 40 companies, employing more than 71,000 people in over 35 countries worldwide.

Despite his wealth, he lives a frugal lifestyle and is known for traveling without a wallet. He enjoys spending time with his family on Necker, his private island in the Caribbean.

Branson invites elite business moguls and friends to the island to relax and discuss possible ventures. He’s also a great entertainer and well-known for his long evening dinners where he interacts with everyone at the table.

For a man in his seventies, Branson has surprising vitality, and he still has a full head of hair. The entrepreneur states it’s due to his health and low-stress lifestyle.

Let’s take a look into the daily routine of Britain’s most colorful and well-known entrepreneur.

Inside a day in Richard Branson's life

While he enjoys his time on Necker Island, he often travels the world on business in his private plane. Regardless of whether he's waking up on Necker or another country on the other side of the world, Branson gets an early start.

Like many entrepreneurs, he rises every day at 5 am and uses the morning to get some quality time with his family and exercise, before settling down to the day's business. He says he spends about 40 minutes lifting weights in the morning to help him maintain his strength and fitness.

If he is on Necker, he'll use the morning to get into the ocean for some kite surfing. After getting out of the water at around 9 am, he'll go home for breakfast. If he's on the mainland, he will spend the time playing tennis in the morning to get the blood moving.

Branson says he enjoys a light, nutritious breakfast consisting of a fruit salad and some muesli, nuts, and dried fruit. He'll eat the meal dry, without any milk or yogurt.

The workday starts around 10 am, answering emails and catching up on the news through reports sent to him by his team. He sips tea almost constantly during the day, reportedly drinking as many as 20 cups a day.

If he is on the mainland, he’ll take his lunch during meetings to save time. Branson is known to dislike formal meetings and prefers to either walk and talk or discuss business over a meal in the afternoon.

If he is working from Necker, he’ll coordinate his schedule with Helen, his assistant. Most of his afternoons are spent taking calls and answering emails from the Virgin offices around the globe.

Lately, he has been spending more time posting to his blog, releasing a steady stream of content — quite varied in topic and substance — ranging from business tips for young entrepreneurs to his family's photos.

Branson typically winds down the day at around 5 pm to 6 pm and enjoys the fading light on his private island, relaxing on the patio in front of the pool before getting ready for the highlight of the day – dinner.

Dinner is his favorite meal of the day – not only for the delicious food but for the chance to chat with his friends or family at the dinner table.

According to Branson, the best dinners consist of laughter and conversation. Necker's dinner table has seeded dozens of new ideas.

Dinner provides Branson with nutrition and inspiration that’s vital for his creative process. While he used to enjoy a drink with dinner, he has recently gone off alcohol, preferring to sip on some sparkling water with lemon instead.

After dinner's antics are over, Branson takes a few hours to go through his social media and his email inbox.

After finishing with the tech side of his life, he will retire to bed around 11 pm where he’ll often read a few chapters of a book or watch a documentary to relax before sleeping.

The Virgin boss says he needs at least five to six hours of sleep a night to remain functional throughout the day.