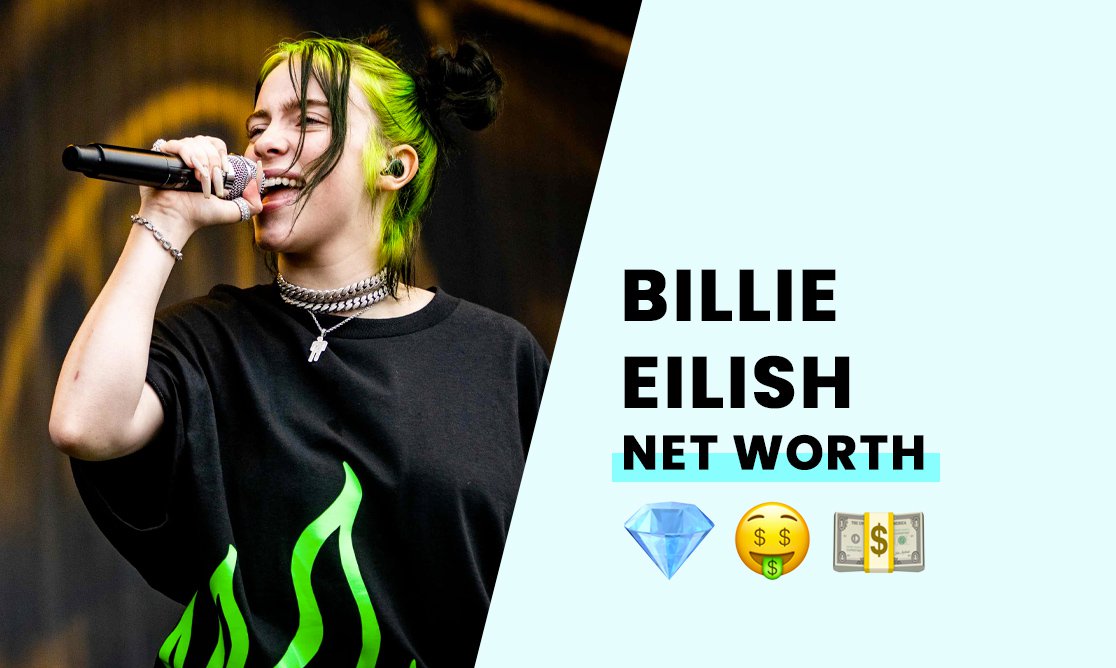 The estimated net worth of Billie Eilish is $30 million.

Billie is an American songwriter and singer with a string of successful singles.

Billie rose to fame on the music platform, SoundCloud, signing to Interscope Records after the success of her SoundCloud releases. Billie garnered mainstream fame after the release of the single "Bad Guy" in 2019, which rose to the top of the Hot Billboard 100 to claim #1 status.

Billie Eilish Pirate Baird O'Connell was born on December 18, 2001. The singer grew up in Los Angeles with her parents Maggie Baird and Patrick O'Connell. Billie has an older brother, Finneas, and the family has Irish and Scottish heritage.

Both Billie's parents were musicians, and her father had a career as an unsuccessful actor. Billie grew up with music, with her parents encouraging her to participate in the creative and performance arts from an early age. Eilish started working on music with her brother, writing her first song when she was just 11-years old.

Both Billie and her brother, Finneas, never attended public school, with her parents choosing to homeschool her. Eilish passed the high school equivalency exam, graduating from high school at 15-years old to pursue a career in music.

How did Billie Eilish build her net worth?

Billie Eilish released her debut album "When We All Fall Asleep, Where Do We Go?" in 2019, featuring the hit singles "When I Was Older" and "Bury a Friend." The record claimed the #1 spot on the Billboard 200 and the UK charts, breaking several records.

Billie also holds the record for the most songs simultaneously charting on the Billboard Hot 100 by a female artist. She won all four categories during the 2020 Grammy's, becoming the first and the youngest woman to achieve this goal.

Billie launched her apparel line in 2019, collaborating with the Japanese artist Takashi Murakami. Takashi went on to direct a few of Billie's videos. She also netted sponsorships from Adobe Creative Cloud and featured in the Calvin Klein brand ad campaigns.

2019 also saw the singer partner with the brand "Freak City," and Apple partnered with her to promote its Music Lab app. However, the bulk of her wealth comes through her album sales and tours. Her 2019 tour, "When We All Fall Asleep," grossed $18 million, and she sold out all 500,000 tickets to her 2020 "Where Did We Go?" tour in the first hour of tickets being available online.

Billie says that she got the inspiration and motivation she needed to succeed from her parents and her brother. Her family helped her persist through her early career when she felt like giving up, and she says her brother is a big influence in her success.

How rich is Billie Eilish?

With a fortune of $30-million, Billie Eilish is one of the richest and most successful pop stars of her era. She continues to make music, and she has a massive social media following on Instagram.