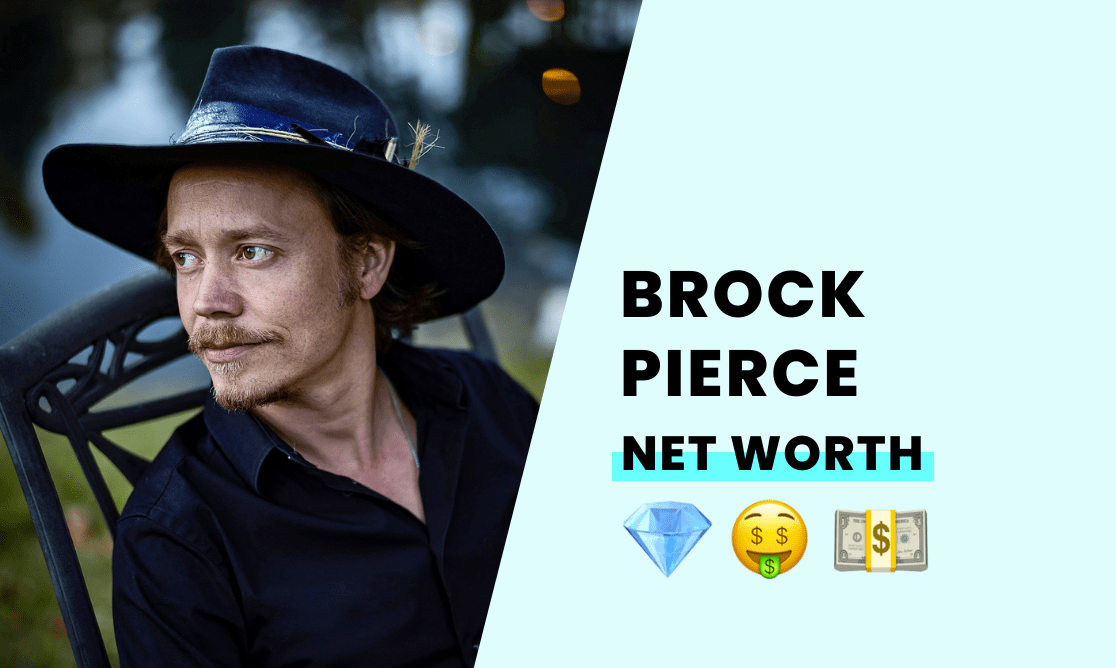 Brock Pierce's net worth is estimated to be approximately $1 - 2 billion.

Since much of Brock Pierce's net worth is held in crypto, what he is worth fluctuates depending on the market.

Pierce was born on November 14, 1980, in Minneapolis, Minnesota, to Lynette Pierce, a disco dancer, and Jeffrey Pierce, a builder. He appeared in commercials as a toddler.

Pierce lives in Puerto Rico, which has become somewhat of a stronghold for crypto traders and influencers.

His wife, Crystal Rose, is the CEO of Sensay, an AI-powered platform for teaching English, and co-chairman of the United Council of Rising Nations, which "deploys global delegations of leaders, entrepreneurs and diplomats to nations actively seeking to advance their economies through technology."

How did Brock Pierce build his net worth?

Brock started working as a toddler when he appeared in commercials. Most of his earnings would go to savings or towards additional lessons to further his career.

He had his first big break when he was cast in the blockbuster hit "The Mighty Ducks" in 1992. The film grossed over $50 million and was followed up by a sequel.

Brock when on to perform in several other movies until he retired from acting at the age of 17. His last movie was "The Ride," which was released in 1997.

Following his retirement from acting, Peirce became a minor partner at Digital Entertainment Network (DEN), which raised almost $90 million in venture capital. From the age of 18, he was bringing in $250k per year.

However, DEN closed down in 2000 after the co-founders were involved in a scandal, although allegations of wrongdoing were withdrawn.

After DEN's collapse, Brock went on to invest in other ventures. He founded a venture capital firm in 2013 with two other partners. The firm, Blockchain Capital, went raised $85 million in funds. He also worked with Mastercoin and went on to co-found the Tether stablecoin. He is regarded as a crypto whale.

Among other ventures, Brock was also a co-founder of Blockone, IGE, Xfire, and several other companies. He maintains various real estate investments, gaming rights, and also gets paid as a guest speaker.

How has Brock Pierce spent his wealth?

According to reports, Brock Pierce is not a big spender. He doesn't see money as a motivator, but rather as a store of energy. He wants to be a force for good and says that money doesn't make people happy. When asked what he prefers to spend his money on. He says that as an investor, he prefers to sink his money into funding new projects.

He is currently preserving an illegal Catholic Church in Amsterdam, built in 1746. He also bought the Funchal, a 1961 cruise ship built for the president of Portugal, and plans to turn it into a five-star Lisbon hotel. He says he paid $1.8 million on auction for the ship, which would cost $150 million to build.

Pierce enjoys eating in smart restaurants, saying that it is his single biggest expense. He gives a lot to charity and also supports artists by buying their works.

He plans to give all his money away before he dies as he says he will have no use for it when he is gone.

How rich is Brock Pierce?

Brock Pierce is estimated to be worth approximately $1 - 2 billion. This estimation depends on the value of the crypto he holds.

Is Brock Pierce a millionaire?

Yes. Brock Pierce is a millionaire.

No. Brock Pierce was not born into riches. His wealth is a result of timely investments, innovation, and taking calculated risks.