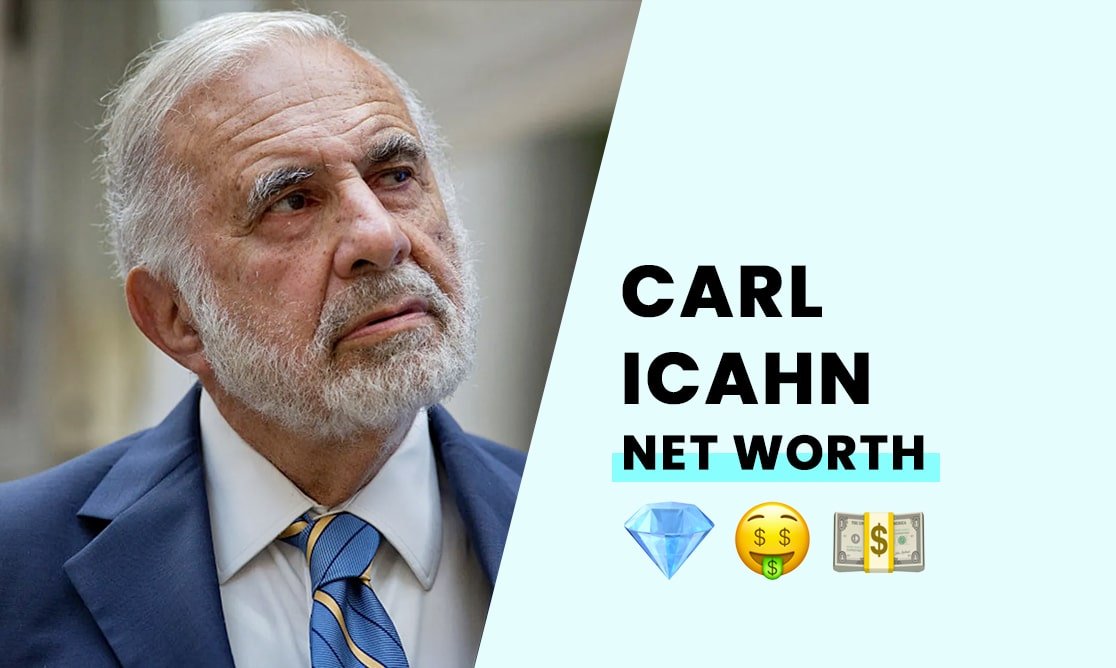 Carl Icahn's net worth is estimated to be around $24 billion.

Carl Icahn was born on February 16, 1936, in Brooklyn, New York City, to an Ashkenazi Jewish family and raised as an only child in Far Rockaway, Queens, New York City. His father, Michael, was a lawyer and cantor who later worked as a substitute teacher. His mother, Bella, was also a schoolteacher.

Icahn attended Far Rockaway High School. He graduated from Princeton University with a BA in philosophy in 1957. Later he entered the New York University School of Medicine, but dropped out after two years to join the military reserve force.

In 1978, Icahn met Liba Trejbal, a Czech ballerina, and married her in 1979, subject to a prenuptial agreement. They had two children, Brett and Michelle. The couple was divorced in 1999. Icahn went on to marry Gail Golden, his longtime assistant, becoming a stepfather of two children.

How did Carl Icahn build his net worth?

Carl Icahn earned most of his wealth as a financier, activist shareholder, and later a hedge fund manager.

After leaving the army, Icahn became a stockbroker with the Dreyfus Corporation. In 1963 he joined Tessel, Patrick and Company as a stock options trader and worked in options trading with Gruntal & Co.

He borrowed $400,000 in 1968 to purchase a seat on the New York Stock Exchange for his new brokerage firm, Icahn and Company. Around this time, he became interested in risk arbitrage, the practice of buying stock in anticipation of a takeover bid that generally lifts the stock price.

In 1978, he bought shares in kitchen stove maker Tappan Company, used his shares to gain a seat on the board of directors, and arranged to sell the company to AB Electrolux, a Swedish firm. Icahn made nearly $3 million in the process for himself. He repeated the move and made $50 million when he bought AFC Industries and sold his shares to Phillips Petroleum in 1985.

During the 1980s, Icahn became known as a ruthless corporate raider who would take over a company, strip its assets, and then sell the husk of whatever remained.

Icahn netted a profit of $470 million with his hostile takeover of Trans World Airlines and followed it up with a series of transactions over the next few years.

His most notable transaction was selling Texaco shares, which brought him around $700 million in profits. He also bought and sold Marvel Comics, RJR Nabisco, Pan Am, BEA Systems, Biogen, and many others.

In 2004, Icahn started raising $3 billion to form Icahn Partners, his hedge fund. He bought ownership stakes in Time Warner and Blockbuster Video. A 2011 takeover by Icahn of Lionsgate Films failed.

He holds $100 million of Apple stock. His portfolio also includes shares in Netflix, among many others.

Carl Icahn was the subject of the 2022 documentary "Icahn: The Restless Billionaire."

How has Carl Icahn spent his wealth?

Despite his reputation for hollowing out companies for financial gain, Icahn has been a generous donor to many charitable causes.

Icahn's foundation supports the education and care of underprivileged children and the operation of vocational schools.

The Icahn Scholars Program at Choate Rosemary Hall annually provides scholarships for financially challenged students from across the United States. Icahn has created an endowment for Choate’s Science Center, the Carl C. Icahn Laboratory for Princeton University’s Institute for Integrated Genomics, and the Icahn Medical Institute at Mt. Sinai Hospital.

Icahn has also sponsored and constructed public charter schools in the Bronx. He supported building Icahn House, a 65-unit complex for homeless families with pregnant women and single women with children. He is a trustee of the Randall’s Island Sports Foundation and has made significant contributions toward Icahn Stadium, a track and field facility for inner city youth.

Icahn has been honored with the Starlight Foundation’s Founders Award and the 1990 Man of the Year Awards for his work. He was named The Guardian Angel 2001 Man of the Year.

Icahn has signed the Giving Pledge, along with Warren Buffet, Bill Gates, Elon Musk, Bill Ackman, and many others, and publicly committed to giving the majority of his wealth to philanthropy during his lifetime or in his will.

Is Carl Icahn a billionaire?

Yes. With a net worth of approximately $24 billion, Carl Icahn is one of the richest financiers and investors in the world.

How rich is Carl Icahn?

Carl Icahn has an estimated net worth of around $24 billion.

Is Carl Icahn a billionaire?

Carl Icahn is a billionaire with an estimated net worth of $24 billion.

Carl Icahn was not born into a wealthy family. His incredible wealth came from years of ruthless deal-making and strategically timed investments.