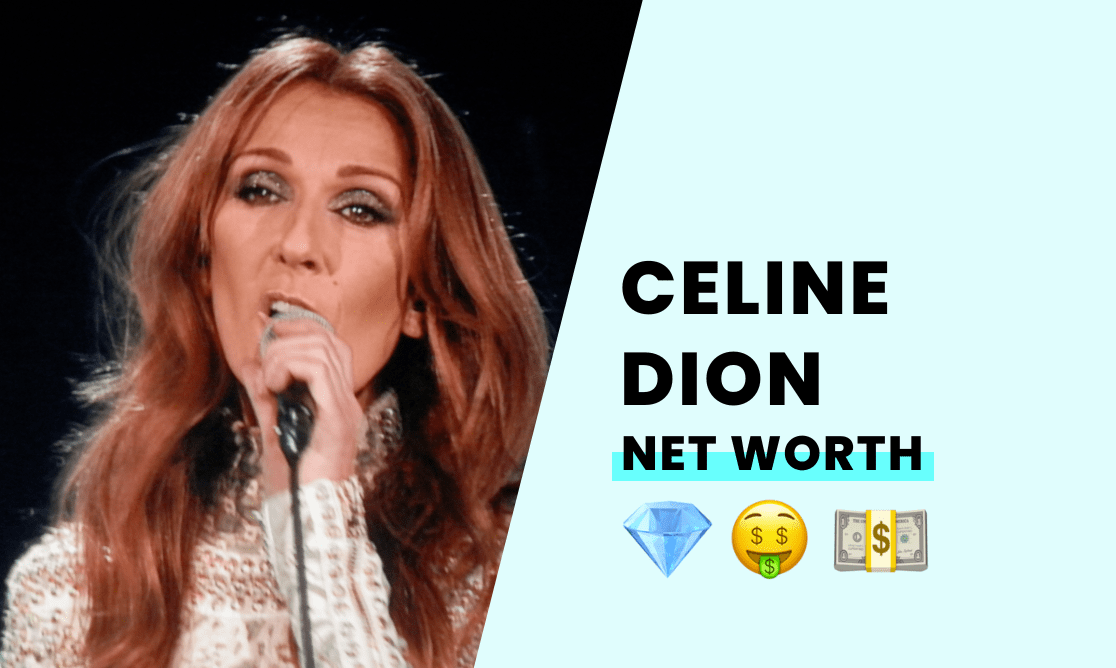 Celine Dion's net worth is estimated to be around $800 million.

Celine Dion was born March 30, 1968, in Charlemagne, Quebec, Canada. She is one of 14 children of Adhemar and Therese Dion. She was named after the song "Celine" by Hugues Aufray.

She took to singing early on and sang regularly at her parents' small piano bar. At the age of 12, she recorded a demo of a song that she had composed with her brother Jacques. Her mother sent it to a music manager, René Angélil, who was profoundly impressed and immediately signed her. Angélil helped finance her first record, "La voix du bon Dieu," in 1981 by refinancing his own home.

Celine Dion did not complete high school, but she did receive an honorary doctorate from Laval University in Quebec and said she considered the distinction "a very great honor for a little girl from Charlemagne."

Celine Dion got engaged in 1991 to her manager, René Angélil, and they married in 1994 in Montreal. Her first son, Rene-Charles, was born in January 2001. The couple later had twin boys, Eddy and Nelson, in 2010. Dion has primary residences in Paris and Las Vegas.

Angélil passed away in 2016 due to throat cancer. When receiving an honorary doctorate from Laval University in Quebec, Celine dedicated it to her husband for his role in her career.

How did Celine Dion build her net worth?

Celine Dion is a megastar singer, songwriter, actress, and entrepreneur estimated to be worth around $800 million.

Dion is known for her powerful and technically skilled vocals and tremendous earning potential. In some years, Dion is said to have earned $40 to $50 million from her various creative endeavors.

While Celine Dion has sold more than 220 million albums worldwide, earning millions annually, a big chunk of her overall fortune has come from Las Vegas residencies.

She still retains immense overall appeal as a live ticket. Her "Courage World Tour," which debuted in Quebec City in September 2019, sold out at all of its 52 North American dates.

How has Celine Dion spent her wealth?

Dion has supported many charities worldwide. She has been involved with the Canadian Cystic Fibrosis Foundation since 1982. She donated $1 million to Hurricane Katrina victims and raised another $1 million for victims of the 2004 Asian tsunami.

A big chunk of Dion's earnings has gone into real estate investments in Las Vegas, Paris, and island properties in South Florida and Quebec, among others. Their sales and current market prices have boosted her net worth.

Dion's primary residences are a $10 million mansion in Paris and an 8,000 square-foot mansion in Las Vegas.

In 2008, before the market crash, Dion and her husband bought a $7 million mansion with 415 feet of private ocean frontage on Jupiter Island in South Florida, becoming an island neighbor to Tiger Woods and Michael Jordan. It was sold for $38.5 million in 2017. In 2016, Dion sold a private island of 20-acres outside Quebec for another $25 million.

How rich is Celine Dion?

Celine Dion has an estimated net worth of $800 million.

Is Celine Dion a millionaire?

Yes. Celine Dion is a millionaire with an estimated net worth around $800 million.

No. Celine Dion was not born into a wealthy family. Her riches came as a result of her success as a performing artist.