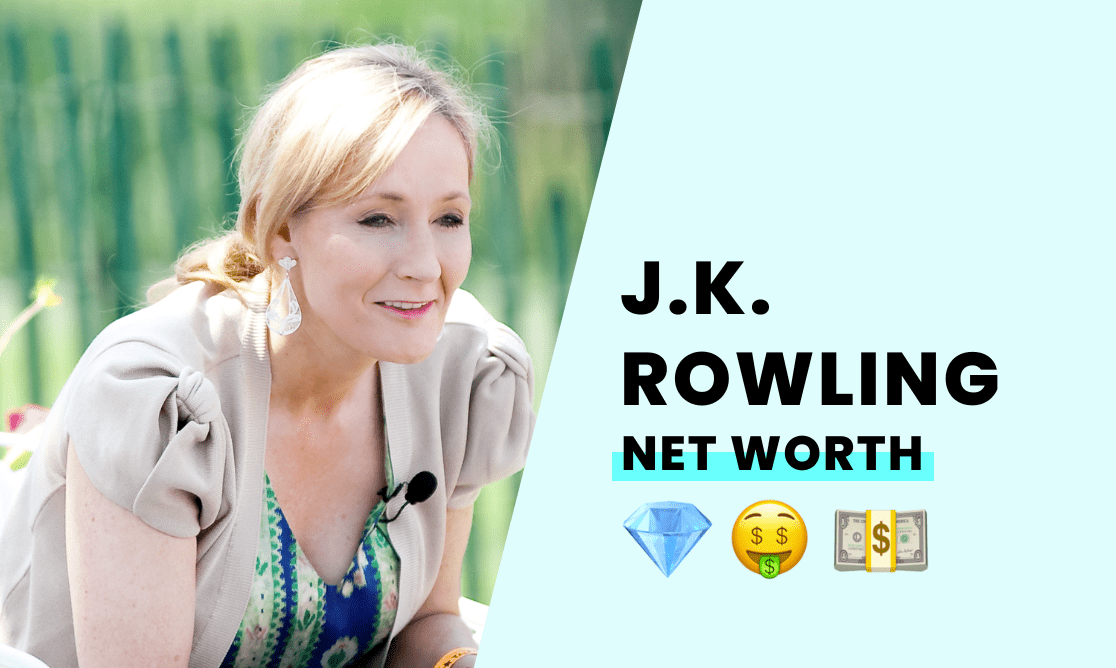 J.K. Rowling's net worth is estimated at approximately $1 billion.

How did J.K. Rowling build her net worth?

J.K. Rowling's extraordinary net worth has been built on the royalties from the runaway success of the Harry Potter novels, film at TV deals, and shares in the theme park and its merchandise sales.

According to the New York Times and the Sunday Times Rich List, J.K. Rowling is estimated to have a net worth of $1 billion.

Rowling had a slow start to her incredibly successful writing career. She pitched her first novel, "Harry Potter and the Sorcerer's Stone," to no fewer than twelve publishing houses, being rejected until Bloomsbury decided to take a chance on the aspiring writer. In 1997, her first and allegedly favorite Harry Potter novel was published to overwhelming critical acclaim.

Children and adults alike could not wait for the next Harry Potter novel to hit the bookstores. Thousands queued the night before to get their hands on the next exciting adventures of their cult hero, Harry Potter.

Rowling wrote seven Harry Potter novels at intervals of one year for the first three, but her avid fan base had to wait three years for the fourth novel in the series, "Harry Potter and The Order of the Phoenix."

Not only has she received royalties from the sale of 500+ million copies of the Harry Potter franchise, but she also pocketed a reported seven-figure sum from Warner Bros for the film rights. The revenue earned from merchandise sold around the world is incalculable. Fans simply cannot get enough of the memorabilia, from the trademark Potter glasses to the magic wands.

Furthermore, NBCUniversal paid an estimated $250 million for exclusive television rights to all the Harry Potter films. The share Rowling received has not been disclosed.

In addition, Rowling takes a cut of sales on everything from tickets and merchandise to food and beverages sold at the Harry Potter theme park at Universal.

Although she did not write the stage play "Harry Potter and the Cursed Child," which won nine Olivier Awards, a record for a West-End production, she probably receives a licensing fee and a share of the ticket sales.

Forbes estimated that Rowling’s latest film, "Fantastic Beasts and Where to Find Them" grossed $814 million, with Rowling's share coming in at $10 million.

It is said that she is second only to James Patterson in terms of revenue from book sales.

How has J.K. Rowling spent her wealth?

According to reports, the first Harry Potter book was tapped out on an old typewriter in an Edinburgh cafe as she struggled as a single mum.

She bought an incredible mansion early in her writing career, which she sold and moved to a beautiful property called Killiechassie, which has two halls, a morning room, seven bedrooms, a wing with a two-bedroom extension, a copper dome-covered swimming pool, a state-of-the-art electronic security system, and 24/7 guards. It is worth $10.7 million.

Although not obsessed, she has a handful of cars in her collection, including a Rolls Royce Phantom, a Range Rover, a Ferrari 458, and a Lamborghini Aventador.

Rowling has donated tens of millions of pounds to charities, including more than £15 million to establish a research and care facility for multiple sclerosis and £1 million "to help victims of domestic abuse and homelessness during the coronavirus pandemic after recovering from the virus herself."

How rich is J.K. Rowling?

J.K. Rowling has an estimated net worth of $1 billion, making her the second richest author in history.

Is J.K. Rowling a millionaire?

Yes. J.K. Rowling is a billionaire.