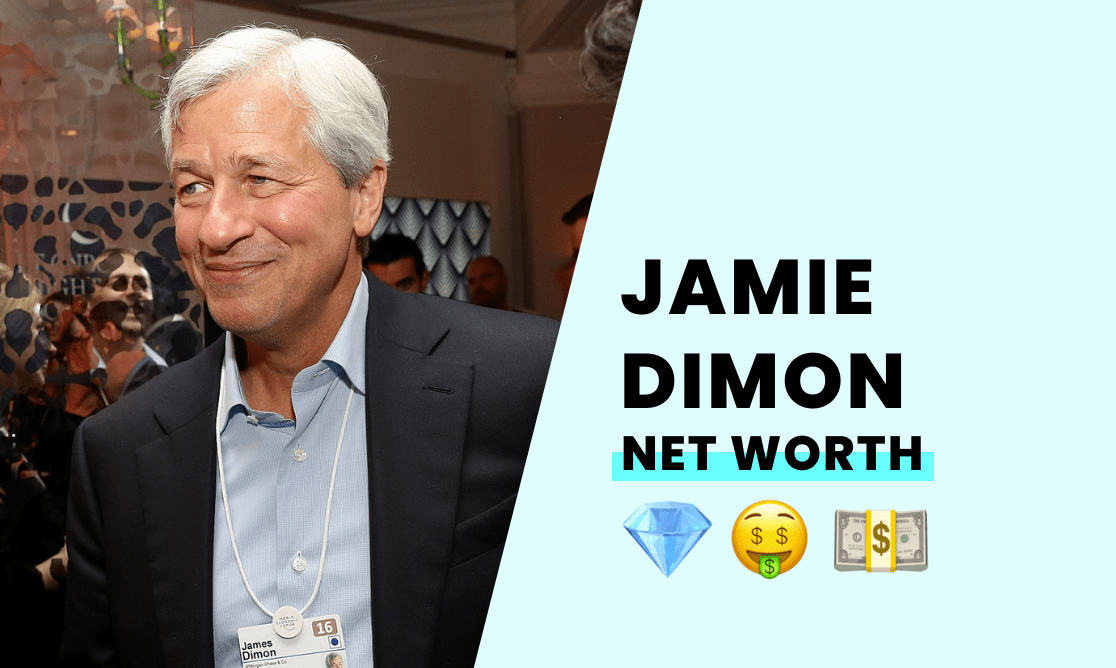 Jamie Dimon's net worth is estimated to be over $2 billion.

He has a fraternal twin brother called Ted and an older brother named Peter. Both Dimon's father and grandfather were stockbrokers at Shearson.

After graduating, Dimon worked in management consulting for two years before enrolling at Harvard Business School. He worked at Goldman Sachs during the summer and obtained his MBA in 1982.

Jamie Dimon met Judith Kent at Harvard Business School, who he married in 1983. The couple has three daughters, Julia, Laura, and Kara Leigh.

How did Jamie Dimon build his net worth?

There is a key lesson to learn from Jamie Dimon, the long-term CEO and chairman of JPMorgan Chase & Co: being good at your job pays. And Jamie Dimon is a prime example of that. As CEO and chairman of JPMorgan Chase since 2007, he has earned around $30 to $40 million a year in compensation. In fact, Dimon is considered the only banking professional to reach the billionaire's list while not being a bank founder.

Most of Jamie Dimon's net worth comes from financial assets, mostly in the form of JPMorgan Chase stock and stock options. He also has an income from his leadership role of $30 to $40 million a year, which includes his base salary.

Through savvy leadership and acquisitions, JPMorgan Chase has become a leading US bank in terms of domestic assets under market capitalization, management, and value of traded stock. Dimon's wealth is linked inextricably with the success and valuation of JPMorgan Chase.

After his Harvard MBA, Jamie Dimon turned down offers from Goldman Sachs, Morgan Stanley, and Lehman Brothers to become an assistant to Weill at American Express, where his father was serving as an executive vice president. Dimon and Weill left American Express in 1985 to take over Commercial Credit, a consumer finance company. Dimon served as the chief financial officer, helping turn the company's fortunes around.

After a series of mergers and acquisitions, the pair — Dimon and Weill — formed Citigroup, a financial services conglomerate, in 1998. However, all was not well at the top of the organization. Dimon left Citigroup at the behest of Weill shortly after its formation, selling 2.3 million Citigroup shares and earning a pre-tax profit of $110 million.

By early 2000, Jamie Dimon was the CEO of Bank One, considered the fifth largest bank in the United States. When JPMorgan Chase bought over Bank One four years on, Dimon stayed on to become president and chief operating officer. He was named the CEO of JPMorgan Chase in 2005 and became chairman and CEO one year later. His savvy investment choices and management helped shield his company from $12 billion in subprime losses during the 2008 crash.

Jamie Dimon became a billionaire in 2015, 33 years after he graduated from Harvard Business School. By that time, Dimon's stock portfolio included 6.1 million JP Morgan shares worth $793 million and another tranche of exercisable options worth $80 million, adding up to $873 million. His JPMorgan holdings dipped under $100 million at the height of the financial crisis in 2008.

Among the many accolades received over his stellar career, Jamie Dimon has been included in Time magazine's 100 most influential people in the world list four times, in 2006, 2008, 2009, and 2011.

Bloomberg estimates that Dimon's other financial assets today are worth over $500 million.

How has Jamie Dimon spent his wealth?

Jamie Dimon has real estate worth between $30 to $40 million, including an apartment on New York's prestigious Park Avenue, and a 30-acre property in Bedford Corners, New York.

There is little doubt that the billionaire investment banker applied the same financial savvy and investment strategies to his personal investments — besides those tied to JPMorgan Chase — estimated to be valued at over $500 million.

The Dimons contributed sizable sums to various educational institutions as their daughters reached college age. Besides those, much of their philanthropic activities are made through The James and Judith K. Dimon Foundation, a family foundation established in 1996 to support education, health, children, youth, and social services.

How rich is Jamie Dimon?

Jamie Dimon's net worth is about $2 billion.

Is Jamie Dimon a millionaire?

Jamie Dimon is a billionaire with a net worth of more than $2 billion.

Jamie Dimon's father and grandfather were both stockbrokers. Although we do not know his father's net worth at the time, his family's wealth was probably above average when he was born. However, his current status as a billionaire banker is down to him taking opportunities and calculated risks throughout his career in finance.