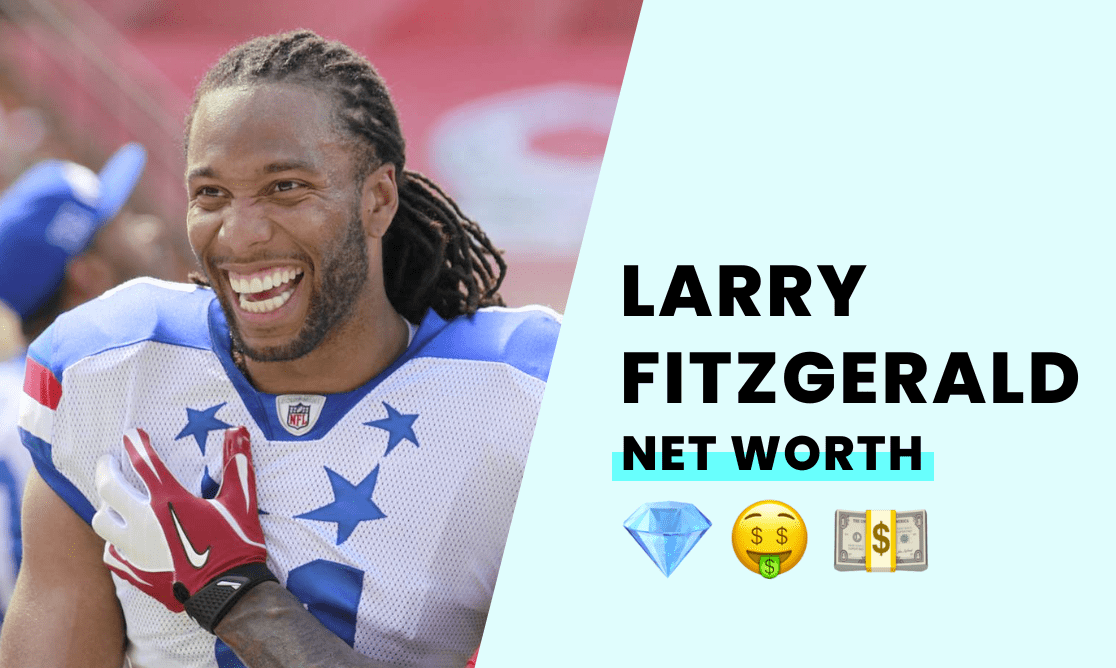 Larry Fitzgerald's net worth is estimated at $50 million.

Born in Minneapolis, Minnesota, on August 31, 1983, Larry Fitzgerald is the son of a sportswriter by the same name. The elder Fitzgerald is believed to be the first reporter to cover his son in a Super Bowl game which he did while writing for the Minnesota Spokesman-Recorder. Fitzgerald lost his mother to cancer in 2003.

Fitzgerald received his early education at the Academy of Holy Angels in Richfield, Minnesota, where his football career started. Failing to meet NCAA requirements to play football as a freshman, Fitzgerald went off to Valley Forge Military Academy in Pennsylvania for a year after school. He then moved on to the University of Pittsburgh, becoming one of the best wide receivers in college football. Fitzgerald completed his undergraduate degree at the University of Pheonix years later, in acknowledgment of his mother’s wishes.

At 22, Larry Fitzgerald married 35-year-old Angela Nazario. Together they had a daughter, but the relationship didn’t last, with Nazario famously accusing Larry of beating her. Larry Fitzgerald has dated social media influencer and celebrity Melissa Blakesly since 2010. The couple’s son was born in April 2013.

How did Larry Fitzgerald build his net worth?

Larry Fitzgerald's net worth has been built on his NFL career earnings, brand partnerships, and investments.

He started his professional football career in 2004. Still, he was already a star, having won several awards for football in 2003 while still at college and playing for the Pittsburgh Panthers.

He was drafted into the Cardinals in 2004 and continued to grow from strength to strength, playing only for the Cardinals. Still, his team manager appears to have appreciated Fitzgerald’s incredible talent, signing him into an 8-year contract of $120 million in 2011. This contract made Larry Fitzgerald the NFL’s fifth highest-paid footballer alongside Richard Seymour.

In 2020, Fitzgerald signed a one-year contract with the Cardinals for a cool $11 million. He retired from the NFL in February 2022. He has earned around $170 million in football earnings since the start of his career.

Football isn’t Larry Fitzgerald’s only income earner. He has endorsement deals with big brands like Lenovo and Powercube. He has also appeared in advertisements for global brands like Microsoft, Nike, Visa, and Bridgestone, to name a few.

Fitzgerald is no slouch when it comes to business, either. He is a prolific investor, having invested in more than 50 companies. Highlights in his repertoire include an investment in a bank for startups, a minority stake in the Phoenix Suns basketball team, a stake in the Rajasthan Royals cricket team (with Chris Paul and Kelvin Beachum), and funding for Upstox, an online trading platform.

I didn’t have to look outside my house for people to emulate. My dad was a very stoic, stern, hardworking, honest man. A great mentor. And my mom was so selfless; she had such compassion for people. ~Larry Fitzgerald

How has Larry Fitzgerald spent his wealth?

Larry Fitzgerald is known as a keen traveler. He has visited more than 100 countries around the world. "I probably charter 50 to 75 hours a year," he told Business Jet Traveler.

Larry Fitzgerald bought a lovely home in Pheonix worth $5 million. It has seven bedrooms, eight bathrooms, and a 12-car garage. It also has plenty of outdoor amenities, including two swimming pools. Larry sold his Arizona mansion for $18 million, making a tidy profit.

Larry Fitzgerald is also a well-known philanthropist, receiving several awards for his commitment to charitable and community work. Most of his philanthropic work is in the interest of children.

How rich is Larry Fitzgerald?

Larry Fitzgerald is worth at least $50 million.

Is Larry Fitzgerald a millionaire?