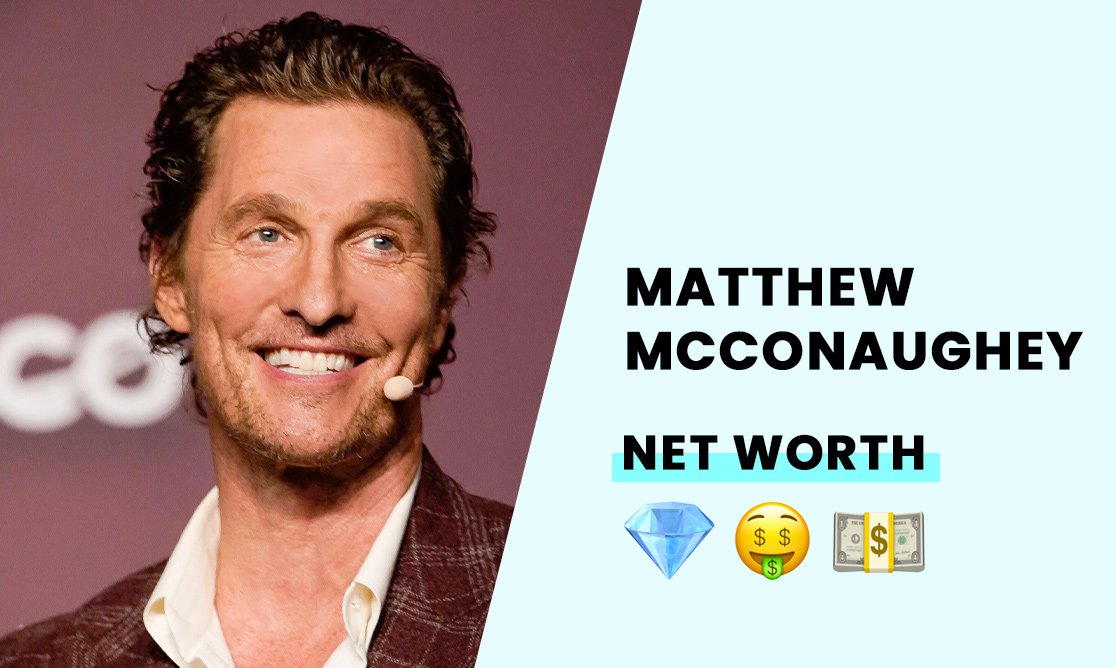 The estimated net worth of Matthew McConaughey is $140 million.

McConaughey is an American actor and producer, rising to Hollywood fame after his role in the 1993 comedy-drama "Dazed and Confused."

McConaughey is one of the most recognized talents in Hollywood, and he is one of Hollywood's most sought-after leading actors.

Born on November 4th of 1969 in Uvalde, Texas, Matthew David McConaughey grew up with his parents in Texas. His father was an oilman, and his mother worked as a kindergarten teacher. McConaughey's parents divorced and remarried three times, and he has two brothers.

Matthew was part of a foreign exchange program while visiting Australia for his final year in high school. After graduating high school, he attended U-T Austin, graduating in 1993 with a BS in TV, Radio, and Film.

During his university career, Matthew toyed with the idea of becoming a lawyer but dropped the idea to chase a career as an actor. McConaughey earned the title of professor of practice from U-T Austin in 2019.

Matthew earned the title due to his service as a visiting professor since 2015, working with the media department in film, TV, and broadcasting entertainment.

How did Matthew McConaughey build his net worth?

McConaughey began his career working in TV commercials. However, he would get his big break into Hollywood with the 1993 film, Dazed and Confused. During the film, he utters the words, "all right, all right, all right," which instantly garnered him a cult following, and he'; still the subject of viral memes on the internet depicting the phrase.

McConaughey won several awards during his acting career. The star won the People's Choice Award for his performance in Sahara, and he won an Academy Award for Best Actor for his role in the 2013 drama, "The Dallas Buyer's Club." He would lose a significant amount of weight for his role in the film, playing a cowboy diagnosed with HIV.

The film would also earn Matthew a Golden Globe, Critics Choice Movie Award, and the Independent Spirit Award. After his role in the Dallas Buyers Club, he starred alongside Woody Harrelson in the series "True Detective," earning a Critics Choice Television Award for his role.

McConaughey finished 2014 by earning a star on the Hollywood Walk of Fame. He paid $10 million for his home in Point Dume, Malibu, California, in 2007, selling it to film producer and director Phil Lord in 2020 for $15 million.

McConaughey has also lent his name to brands in his career, including Wild Turkey in 2016. Being a bourbon enthusiast he officially joined Wild Turkey as the Creative Director to create the Longbranch bourbon.

Matthew also has a 10,000 square foot mansion in Austin, Texas, and he has a string of Airstream trailers which he maintains in a local upmarket trailer park.

Matthew McConaughey attributes his success to his mindset of never giving up. He has a YouTube Channel with millions of subscribers, where he posts motivational videos to inspire others.

How rich is Matthew McConaughey?

With a reported wealth of $140 million, Matthew McConaughey is one of the leading A-list celebrities in Hollywood and sought-after acting talent in dramatic roles.