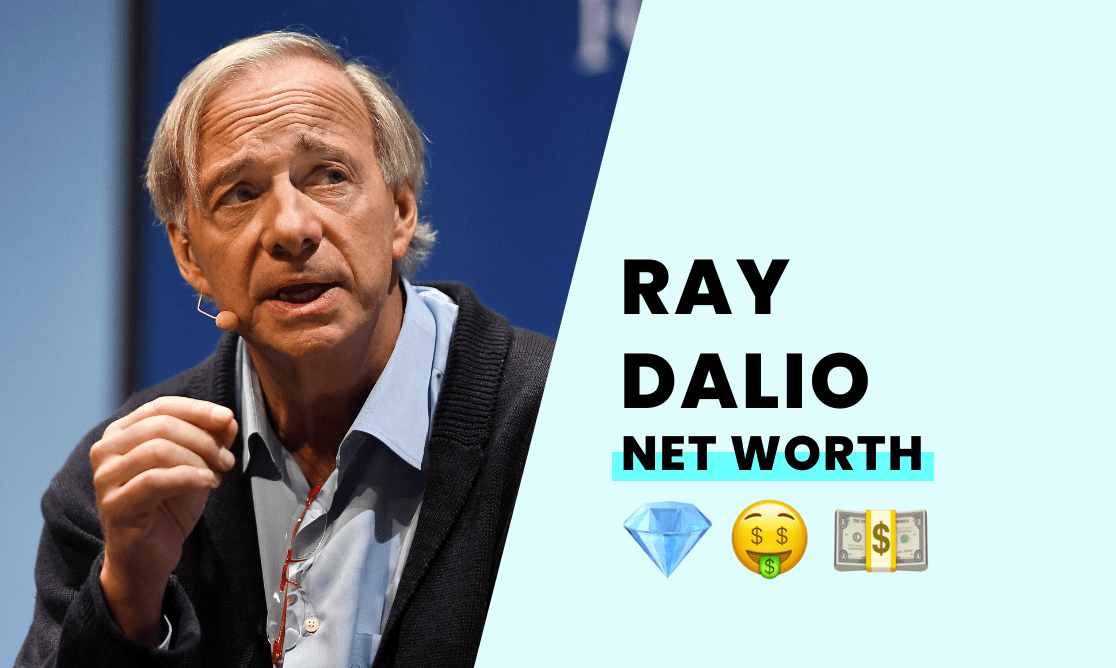 Ray Dalio's net worth is estimated to be approximately $16 billion.

Ray Dalio was born on August 8, 1949, in Queens, New York, to Ann, a homemaker, and Marino, a jazz musician. He moved with his parents to Manhasset, Long Island, at eight.

Dalio worked various odd jobs while growing up, including as a lawn mower, snow shoveler, and caddy at the Links Golf Club, where he met many Wall Street professionals. He befriended Wall Street veteran George Leib, who often invited Dalio to family gatherings. Later Dalio got a job with Leib's son at his trading firm.

Dalio began investing and experienced early success after buying shares of Northeast Airlines just before its merger with another firm. As a result, by the time Dalio got to high school, he had an investment portfolio valued at many thousands of dollars.

Dalio married his wife, Barbara, in 1973. They have four sons, Devon, Paul, Matthew, and Mark. Their eldest, Devon, was killed in 2020 in an automobile accident. The Dalios live in Greenwich, Connecticut.

Ray Dalio is an avid outdoorsman and enjoys spending time fishing and hunting.

How did Ray Dalio build his net worth?

Ray Dalio became a billionaire thanks mostly to his savvy investment strategies and his ability to accurately predict and manage risk, both as an individual investor and as an institutional investor, serving as the co-chief investment officer of Bridgewater since 1985.

Dalio started investing when he was very young at the age of 12. Such was his prowess that his investment portfolio was worth thousands by the time he went to high school.

Most of his wealth comes from investments and Bridgewater Associates, the world's largest hedge fund with over $235 billion in assets under management, which he founded in 1975.

Dalio owns around 79% of the company. Thanks to its performance, he earned around $15 billion between 2005 and 2020. Bridgewater's biggest break came when it secured McDonald's as a client.

Before Bridgewater, Dalio worked at the New York Stock Exchange and the commodities division of Merrill Lynch. Later he worked as the Director of Commodities at Dominick & Dominick LLC and Shearson Hayden Stone as a futures trader and broker.

He is an innovator in finance and has popularized commonly used practices, including currency overlay, portable alpha, and risk parity.

Dalio is a learned man and has written four books: "How the Economic Machine Works; A Template for Understanding What is Happening Now" (2007); "Principles: Life & Work," {2017), which became a New York Times bestseller; "Principles for Navigating Big Debt Crises," (2018), and "The Changing World Order: Why Nations Succeed and Fail,"(2021). Royalties from book sales have also added to his net worth.

How has Ray Dalio spent his wealth?

Dalio has reinvested his earnings from investments into building Bridgewater Associates, which has then generated more wealth for him and Bridgewater's investors and clients.

Together with his wife, Dalio has joined Bill Gates, Warren Buffett, and many other billionaires for the Giving Pledge, a commitment by which wealthy individuals vow to donate over half their fortunes to charitable causes within their lifetime.

He has also launched the Dalio Foundation, through which he has donated millions to a variety of causes and charities, including the David Lynch Foundation and the National Philanthropic Trust.

How rich is Ray Dalio?

Ray Dalio has an estimated net worth of $16 billion.

Is Ray Dalio a millionaire?

Dalio is a billionaire and his net worth is estimated to be around $16 billion.

No. Dalio's family were not rich when he was born. He made his billions by networking, working hard, developing his financial knowledge, and making timely investments.