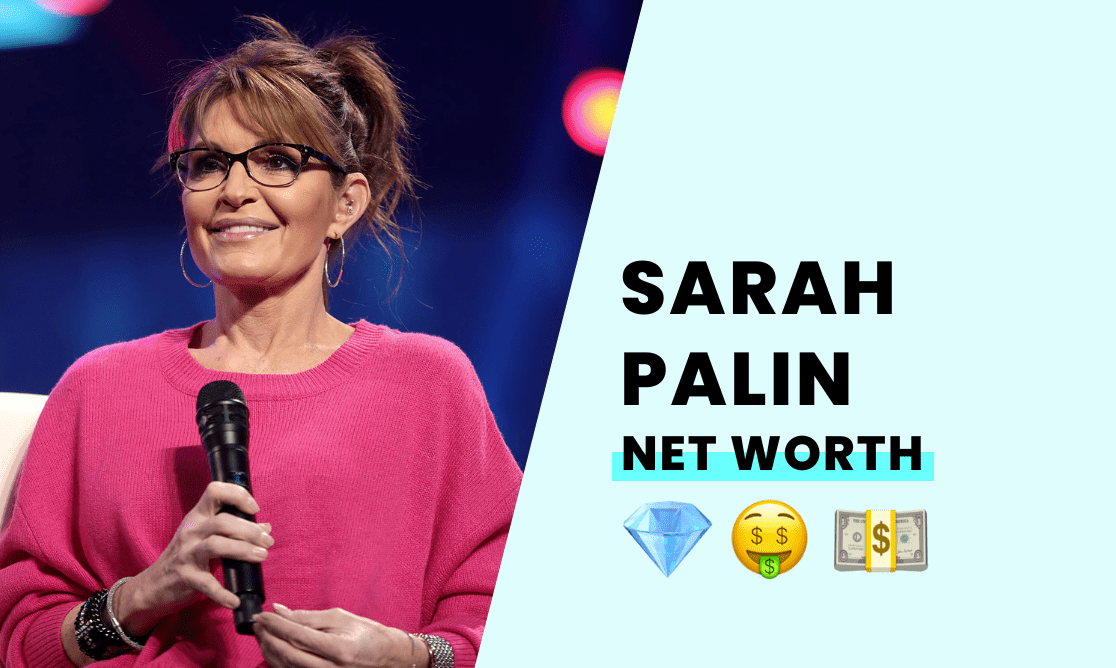 Sarah Palin's net worth is estimated at $8-12 million.

How did Sarah Palin build her net worth?

Sarah Palin built her net worth through her political career as a public speaker and reality TV personality and from royalties on book sales.

She was born in Alaska and rose to fame in 2008 when the late John McCain, then a candidate for president of the United States, asked her to be his running mate. Suddenly, Sarah, with her good looks and outgoing personality, shot to prominence in American politics.

In 2008, Sarah held the position of Alaska’s governor, earning $125,000 per annum. However, despite John McCain not winning the presidential race, she resigned in 2009, and ABC reported that her earnings topped $12 million. This haul appears to be due to a hectic schedule of speaking appearances said to be worth between five and six figures a showing. She also appeared on her TV show, "Sarah’s Alaska," which reportedly earned her $250,000 for each of the eight episodes.

She has written several books, the most well-known and lucrative being "Going Rogue: an American Life," a personal and political memoir. From all accounts, she received a $1.25 million advance, with the same source saying it could have gone as high as $7 million. The book was released in 2009, with Palin pocketing royalties from selling millions of copies.

Palin has kept mum about her earnings from her contract with Fox News which started in 2010. However, during her tenure until 2013, the controversial political pundit reportedly earned $1 million a year.

She founded a marketing company called "Pie Spy," which provides services to the elderly and disabled. Her salary was revealed in her financial disclosure statement as $70,000.

Also mentioned in her disclosure was the $211,000 she earned from recording personalized video messages for a company called Cameo.

Interestingly, Palin was paid $6,715 by Coutts & Co. for a guest appearance. Coutts & Co. is a London-based private bank. Among its many luminary customers are known to be several members of the British royal family.

Palin ran for congress in a special election in 2022 but lost to a Democrat, leading some commentators to say she was among a stable of politicians, including Beto O'Rourke and Stacey Abrams, whose popularity is on the wane. Her political loss may diminish the value of her personal brand.

I am a conservative Republican, a firm believer in free market capitalism. A free market system allows all parties to compete, which ensures the best and most competitive project emerges, and ensures a fair, democratic process. ~Sarah Palin

How does Sarah Palin spend her wealth?

Several sources report she bought another luxury property in Sandpoint, Idaho, for $10 million. However, we can find no record of this purchase.

Sarah once owned and then sold a campaign bus. Her then-husband said, "We’re downsizing from our beautiful one-of-a-kind Lexa to a smaller class ‘C’ motor home that ‘Grandma Sarah’ feels more comfortable driving. Sarah admits there must be a better way to get around than her white-knuckling on the highways behind the wheel of the Lexa." The Palin family received the asking price of $279,000 for the bus.

NBC News has identified two large cabins in an undeveloped area near Denali State Park as partially owned by the former Alaska governor. Apart from all the accoutrements of luxury accommodation, the cabins also consist of a garage/workshop and a sauna, taking the assessed value of the 10-acre site to $111,700, compared with the 2009 appraisal of $12,000.

There are slim pickings for info on Palin’s car collection; the only thing we could find was that she drives a fire-engine-red Jetta diesel.

How rich is Sarah Palin?

Sarah Palin is worth $8-12 million thanks to her political career, speaking engagements, and royalties from book sales.

No. Sarah Palin's parents were not rich — her mother was a secretary and her father a science teacher — so her wealth has come from her work and ambition.