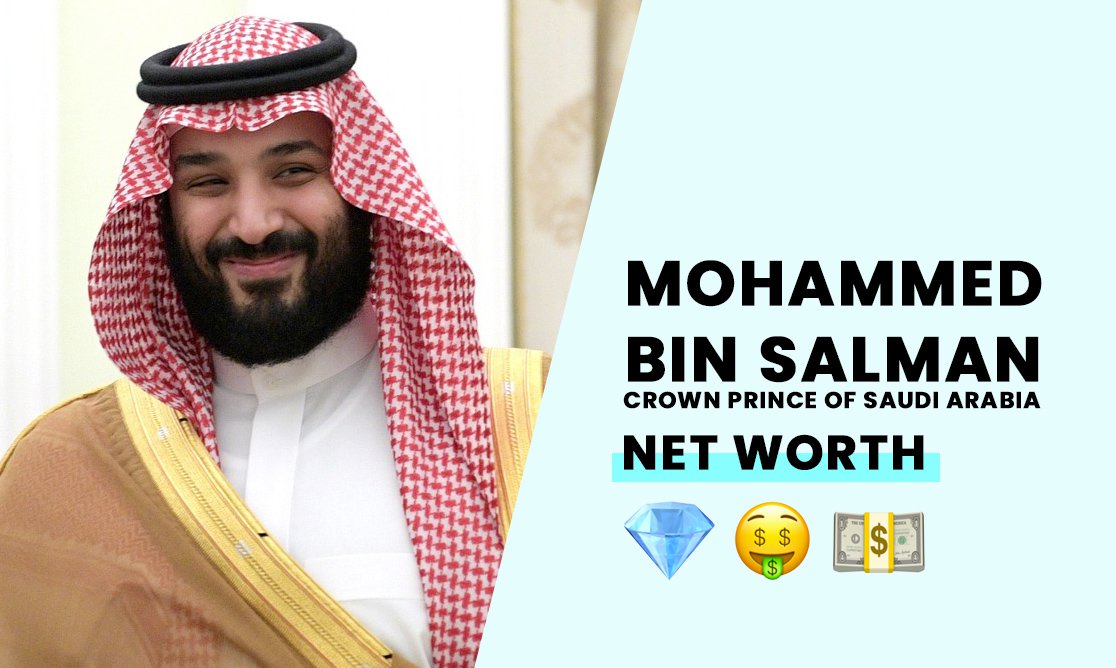 The estimated net worth of Mohammed bin Salman is $18 billion dollars.

Saudi Arabia's Crown prince Mohammed bin Salman is known as MBS for short. His father became the King and the Prime minister of the country in 2015. Though independently wealthy, his royal lineage is his main claim to fame and pathway to wealth. He's the defacto head of state and effectively in charge of the nation's entire $34 Trillion worth.

Mohammed bin Salman was born in 1985 in Riyadh, Saudi Arabia. Mohammed bin Salman is the son of the king's third wife and was among the favorites of all his children. He often followed his father as he went about his administrative tasks and made a point of emulating his actions.

Mohammed bin Salman went to the King Saud University in Riyadh, Saudi Arabia. He studied law and graduated with a BA in the subject in 2007. Although he did not study business, he has gone on to encourage and promote entrepreneurship in Saudi Arabia since his graduation.

How did Mohammed bin Salman build his net worth?

Let’s dive into how he came to own such vast wealth.

Mohammed bin Salman founded several non-profits and firms dedicated to encouraging entrepreneurship in the country post-graduation. In 2009 he became an official advisor to the Governor of Riyad, which happened to be his father. As time went by and his father’s position improved, he eventually became the Crown Prince when his father was named the king in 2015.

Upon being crowned, his father made home the defense minister. A few months after his post was awarded, he used his position to intervene in the Yemeni civil war.

MBS was given control over Aramco, the state oil company, as well as the Council of Economic and Developmental Affairs. During his tenure, he worked towards listing Aramco on the public stock market in order to improve foreign investment in the Kingdom’s energy sector.

Mohammed bin Salman was awarded the position of First Deputy Prime Minister of Saudi Arabia in June 2017. Shortly after, he led blockades against several countries for various reasons during this time. He made several heavy investments in various foreign and domestic sectors to increase the Kingdom's net worth and himself.

The Crown Prince was also criticized widely internationally for his alleged role in the disappearance and death of dissident Saudi journalist Jamal Khashoggi in 2018.

This hasn’t derailed his sweeping plans to clean house in the Saudi Kingdom. He also performed what was called an anti-corruption sweep in which many of the Kingdom's richest citizens were detained.

Following that sweep, the state's coffers grew exponentially, as did its business holdings. He reduced many of the strict restrictions in the country to increase tourism rates and revenue. While there was some pushback from conservatives, it did improve relations abroad while boosting revenues.

MBS has forged ahead with the massive new futuristic city, Neom, as part of his 2030 vision to transform the Kingdom’s economic dependence from oil to commerce and tourism.

His wealth generally is derived from the Saud Royal Family's rumoured $2 trillion wealth and Saudi sovereign wealth fund (which everything from oil to land to football clubs) in addition to his own savvy investments.

It's not all state affairs and business for MBS. He owns a string of luxury sports cars, mega yachts, aircraft, and luxury properties in Saudi and Europe.

Mohammad Bin Salman maintains his productivity by keeping a firm hold on his power and his wealth. He rules with an iron hand and can also can in international circles outside of Saudi Arabia like a seasoned diplomat.

How rich is Mohammed bin Salman?

Mohammed bin Salman has amassed a net worth of $18 Billion dollars placing him among the top 10 richest in the country.