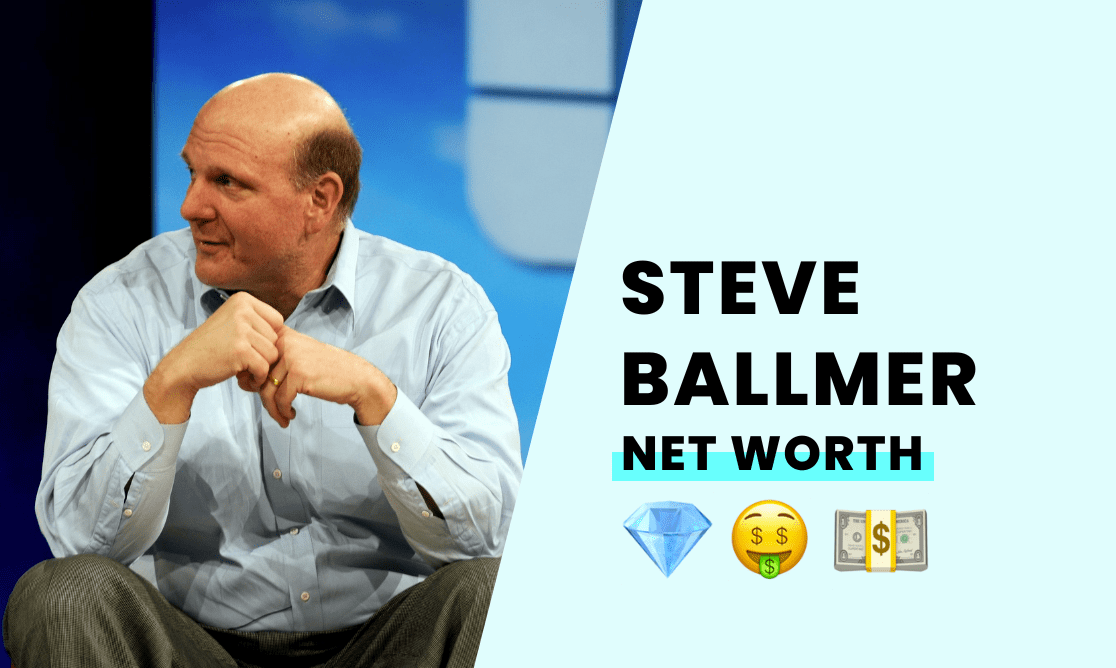 Steve Ballmer's net worth is estimated to be approximately $91 billion.

But he'd be a lot richer if he got paid for every blue screen of death. 🤣

Ballmer was born on March 24, 1956, in Detroit, Michigan. His father, Frederic, was a manager at the Ford Motor Company. His mother, Beatrice, held a management position at an unnamed company. He grew up in Farmington Hills, Michigan.

Ballmer attended the International School of Brussels from 1964 until 1967. He went to Lawrence Technological University for college prep and engineering classes in 1973 and then graduated from the private college prep Detroit Country Day School.

Ballmer is married to Connie Snyder, with whom he has three children.

How did Steve Ballmer build his net worth?

Steve Ballmer has a net worth of approximately $91 billion. He has a close association with Microsoft and also happens to be the owner of the LA Clippers.

Ballmer was one of the earliest employees at Microsoft, the tech company co-founded by Bill Gates and Paul Allen. He joined as their first business manager and was offered equity (stock). When Microsoft incorporated, Ballmer held 8% of the company's shares.

One capability every business is expected to have is the capability to make money. ~Steve Ballmer

To date, Ballmer has sold $3.5 billion worth of Microsoft stock. From what remains of his shares, Ballmer has collected more than $4 million in dividends.

Over the years, Ballmer has overseen several departments, from operations to sales. Ballmer took over when Bill Gates stepped down as Microsoft's CEO in 2000. His salary for leading the company was north of $1 million.

When Steve Jobs released the first iPhone, Ballmer laughed. Microsoft missed out on the mobile revolution and billions of dollars. It was a pivotal mistake he came to regret.

Ballmer retired from the company in 2013 and was replaced by Satya Nadella, who has since reinvigorated the company. Microsoft is now a powerhouse in cloud computing.

Though he does get a nice income from the team, the lion’s share of his money comes from his 8% ownership in Microsoft.

There's no chance that the iPhone is going to get any significant market share. ~Steve Ballmer

How has Steve Ballmer spent his wealth?

Ballmer owns several high-end properties in Hunts Point, WA. In 2019 he spent $9.8 million on a 3,790-square-foot home with five bedrooms and four bathrooms. He acquired his main residence, located on a desirable peninsula of Lake Washington, in 1987, for $1,325,000. The property is now valued at around $12 million.

His most ostentatious — and out-of-character — investment to date was in 2014, when he bought the LA Clippers for $2 billion.

In 2020, Ballmer, through his company, CAPSS LLC, bought The Forum in Inglewood, California, from Madison Square Garden Company for $400 million in cash. Madison Square Garden Company had filed several lawsuits to block the development of a new stadium for the Clippers a short distance from The Forum. Ballmer's acquisition of The Forum ended the legal dispute, clearing the way for construction and the team's move.

How rich is Steve Ballmer?

Steve Ballmer is one of the richest people in the world. His net worth is estimated to be approximately $91 billion.

How did Steve Ballmer make his money?

Steve Ballmer was one of the first employees at Microsoft. He was awarded a significant equity stake in the company, which grew in value with Microsoft's success.