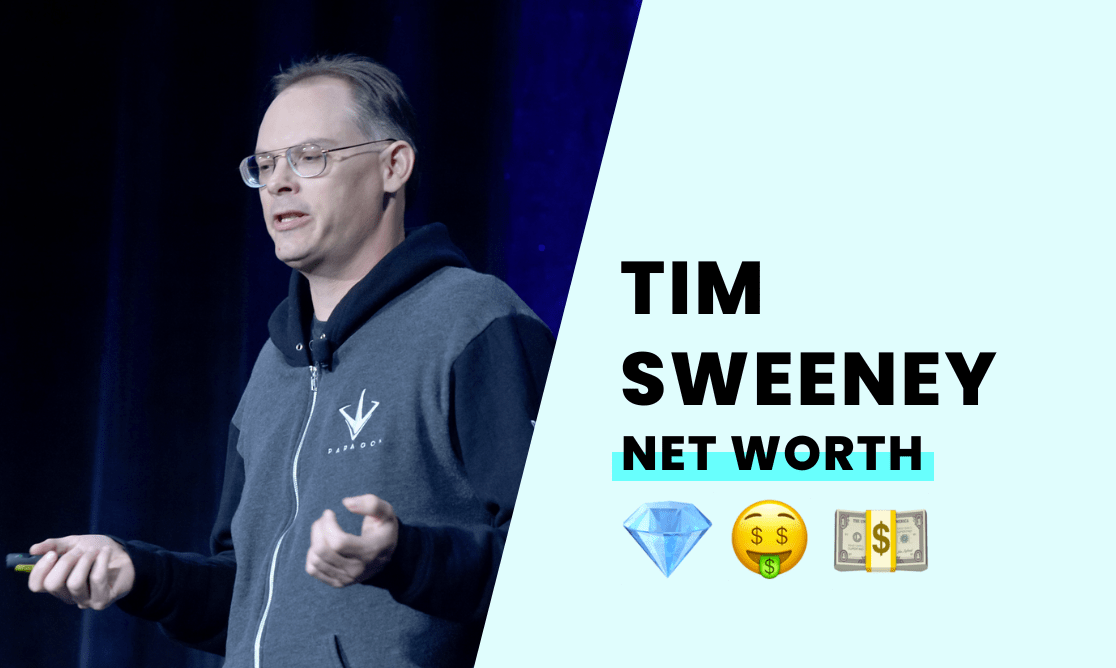 Tim Sweeney's net worth is estimated at approximately $7.6-9.6 billion.

Tim Sweeney was born in December 1970 in Potomac, Maryland.

In his youth, Sweeney built go-karts and dreamed of a career where he could make complicated machines. His oldest brother Steve moved to California to work in the early computer industry. He became interested in arcade games when they became popular in the late 1970s as he knew someone who had programmed the arcade games in the machines, like the mechanical devices he took apart and repaired. Though the family got an Atari 2600, Sweeney was not as interested in the games for that, outside of “Adventure,” and later said he had not played many video games in his life and very few to completion.

At 11, Sweeney visited his older brother’s new startup in California, where he had access to early IBM Personal Computers. Sweeney spent a week learning BASIC and establishing his interest in programming. When his family got an Apple II, Sweeney began learning how to program in earnest, trying to make “Adventure 2” in the spirit of the Atari 2600 game. He estimated that between the ages of 11 and 15, he spent over 10,000 hours teaching himself how to program using the information on online bulletin boards. He completed several games but never shared these with others.

He also learned from his brother’s concepts of entrepreneurship. As a teenager, he made a good deal of money by offering to mow the lawns of wealthy residents in the area for half the price of professional services.

Sweeney started attending the University of Maryland around 1989, where he studied mechanical engineering but remained fascinated by computers. Sweeney established a consulting business, Potomac Computer Systems, out of his parent’s home to offer help with computers, but it never took off, and he shelved the company. He reportedly dropped out of college just one credit shy of graduating and moved back in with his parents in Potomac when he was 20.

Later, Sweeney had the idea of creating games that could be sold, programming them at night or over weekends outside college work. Eventually, he established Epic as a shareware company while he was a student, making his first game, “ZZT,” and releasing it as shareware in 1991. In interviews, Sweeney has credited that game’s success with fueling the early growth of his company.

Sweeney’s father was a cartographer for the US government, and his mother took care of Sweeney and his brothers; Tim is the youngest of 3 boys.

Not much is known about Sweeney’s life other than that he likes to keep things simple. In 2019 he said, “I lead a fairly simple life. I love going off the trail and finding things I think nobody’s ever seen.”

How did Tim Sweeney build his net worth?

The CEO and game developer is most well-known for creating "Fortnight." His company, Epic Games, has launched several games in addition to "Fortnite" and owns the Unreal Engine gaming platform. They are the creators of the popular app "Houseparty."

He founded Epic MegaGames with his partner Mark Rein. His partner is still the company VP.

Tim had a shareware deal with id Software, through which they released some of their early titles. One of their early creations, "Jill of the Jungle," was a significant hit. Unreal Engine was developed in 1995, and the first game to use the engine, aptly named "Unreal," was released in 1998. The game engine went viral.

How has Tim Sweeney spent his wealth?

Not much is known about Sweeney's life. He likes hiking, wears cargo pants and T-shirts to work, and enjoys fried chicken. He is unmarried and has no children. We know he lives in Cary, North Carolina, but his property's size or cost is unknown.

When real estate collapsed, it was an opportunity to buy the best and most biodiverse natural areas. ~Tim Sweeney

How rich is Tim Sweeney?

In 2019, Tim Sweeney made his debut on Forbes’ “400 Richest Americans,” so it is fair to say he is incredibly wealthy.

Is Tim Sweeney a millionaire?

Sweeney is a billionaire who turned his childhood interest in computers into a multibillion-dollar enterprise.