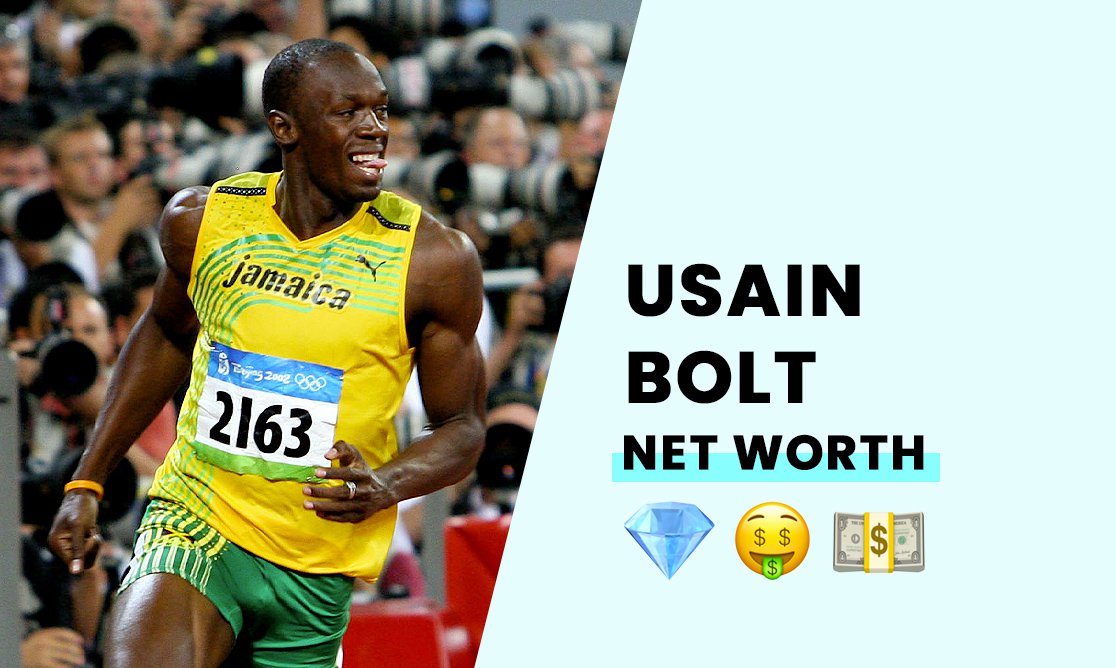 The estimated net worth of Usain Bolt is $90 Million.

Usain Bolt is a Jamaican Olympic sprinter and considered “the fastest man on the planet.”

During the peak of his athletic career, Usain Bolt was one of the highest-paid athletes globally, earning $20-million a year in his lead-up to his appearance at the 2008 Summer Olympic Games in Beijing.

Born on August 21, 1986, Usain St. Leo Bolt is the son of Wellesley and Jennifer Bolt. Usain grew up in the small coastal town of Sherwood Content, in Trelawny Parish, Jamaica.

Usain has two siblings, a sister Sherine and a brother, Sadiki. Usain would spend his youth playing football and cricket with his brother and friends.

Usain attended Waldensia Primary school in Jamaica, achieving the title of the fastest athlete in his school when he was just 12-years old.

He went on to attend William Knibb Memorial High School, where he enjoyed playing a variety of sports. However, his cricket coach encouraged him to focus his talents on sprinting.

How did Usain Bolt build his net worth?

He holds the World Record in 100m (9.58 seconds) and 200m (19.19) sprints. Bolt burst onto the competitive sprinting scene at the IAAF World Youth Championships in Hungary in 2001.

The athlete received many sponsorships after his performance. He reportedly earned around $20 million in sponsorship fees per year in the five years leading up to his debut at the Beijing Summer Olympics.

Usain has endorsement contracts with leading brands like Puma, Nissan, Gatorade, Visa, Virgin Media, Hublot, and Puma. Out of his $20 million in sponsorship earnings, Puma pays him $9-million for sporting their footwear.

Usain also earns through his prize money and appearance fees. He charges between $250,000 to 300,000 for each appearance. Fifty-five thousand screaming fans turned up to see his appearance at the 2010 Penn Relay, setting an attendance record for the event.

Between 2017 and 2018, Usain Bolt raked in earnings of $31 million, with only $1 million coming from his competition earnings.

Usain attributes his success to his mentors in high school. He says they helped him develop his powerful running style, helping him with his nutrition and goal-setting for his training. As the fastest man on the planet, Usain says he likes to have fun driving fast sportscars.

He owns several Ferrari models, including the F430, 458, and California. He also has a BMW M3, and he made the news after totaling a BMW in 2009. Other cars in the Bolt garage include an Audi SUV, a highly customized Jeep Wrangler, a Chevy Camaro, and several Nissan GT-Rs.

How rich is Usain Bolt?

With a reported fortune of $90 million, Usain Bolt is the most successful men’s sprinter of all time. He’s a double world record holder and holds the title of “The Fastest Man Alive.”