10 fintechs that failed (and why) 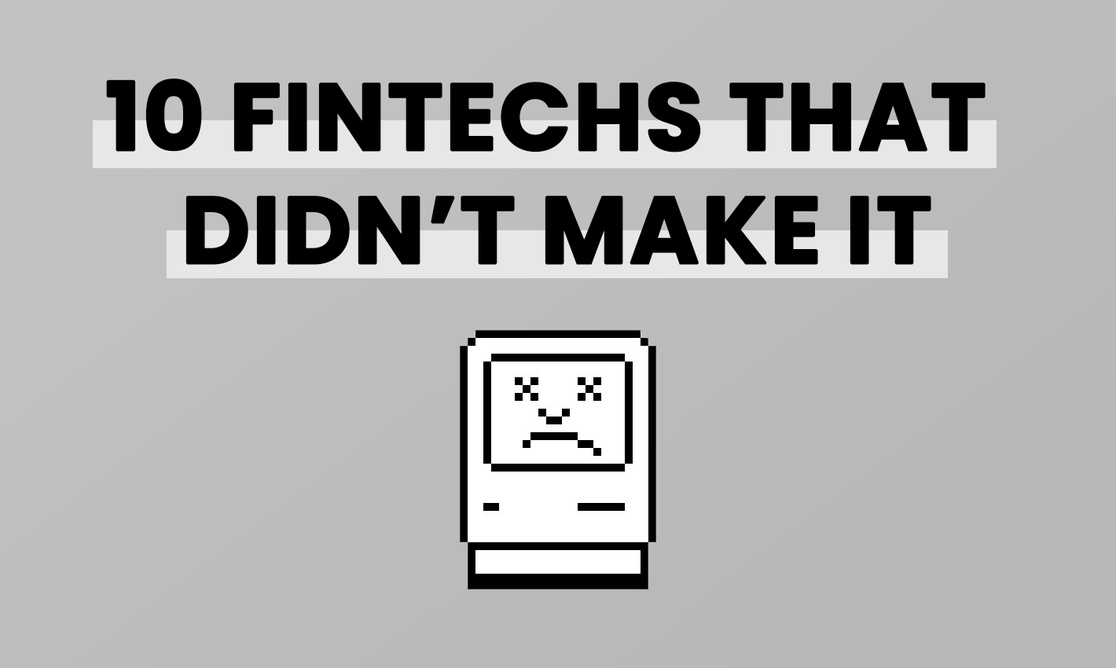 Fintech is a challenging industry to crack. Most companies entering the market find the barriers-to-entry are low, but competition is fierce.

As tech integrates itself further into our lives, more fintech companies are popping up, offering innovative solutions that add convenience and value to our daily lives. Unfortunately, many of them end up failing.

Before we list our ten fintech failures, let's unpack some common reasons why these ventures end up closing their doors.

A lack of funding or underfunding is the top reason for failure cited by most companies. Many fintech companies find themselves already in hot water by the time they realize they need additional funding rounds.

Management might not realize there's a lag to procuring funding, which places pressure on cash flow and dramatically shortens their runway. In the bridge between securing additional rounds of funding, many startups end up running out of money, forcing the company's closure.

Fintechs typically receive funding from venture capital (VC) partners. However, many companies are so grateful to find an investment partner that they fail to vet the investment and management teams.

VCs typically want a controlling stake in the firm and may make demands that many fintechs may struggle to meet. As a result, funding is withdrawn and the fintech is closed.

Fintechs must comply with all regulations, financial laws, and operational requirements. Unfortunately, many companies hire compliance officers very late in the startup process. As a result, they end up in violation of compliance, resulting in regulatory authorities shutting them down.

Although the fintech industry is easy to enter, it can be challenging to establish a foothold. Many companies end up competing with innovations offered by larger, more established firms. As an example, Apple Pay, Google Pay, and AliPay make successful entry into the payments space extremely challenging.

Most fintechs are reliant on large amounts of external capital to secure the runway they need to break through in the market. During economic downturns, however, investors may pull their funding. Given difficult market conditions, the fintech company may be unable to secure additional capital in a timely manner, leaving them without any runway to continue operations.

“After a year marked by Covid-19 and an increasingly difficult capital-raising environment, and following a review of the market in Australia, Xinja has decided to withdraw the bank account and Stash (savings) account and cease being a bank. This was an incredibly hard decision”, Xinja said in a statement. [1]

What did Wonga do?

Why did Wonga fail?

Unfortunately, the company's AI was lending out funds to people that couldn't afford to repay the loans. As a result, the company ended up writing off loans for 330,000 clients. The company also waived fees and interest payments for another 45,000 clients. After a scandal involving sending fake letters of demand to customers in arrears, the FCA demanded Wonga pay £2.6 million in compensation. Wonga officially closed in 2018.

What did GoBear do?

GoBear had aspirations to become "Asia's only impartial and unbiased metasearch engine for insurance and financial products."

Why did GoBear fail?

GoBear ceased operations due to its inability to raise funds due to the global coronavirus crisis. According to CEO Adrian Chng, "GoBear has made the difficult decision to close the business. Our purpose has been to improve the financial health of people across Asia, and I'm proud and grateful for the contributions that all our employees and partners have made towards that mission". [2]

What did ScaleFactor do?

ScaleFactor provided software for automating and streamlining back-office tasks such as bookkeeping and payroll for small to medium-sized companies.

Why did ScaleFactor fail?

The Covid-19 pandemic wiped out demand for its services as businesses closed across the US. In an interview with Forbes, Kurt Rathmann said, "It's not the outcome we wanted, but it's the fiscally responsible CEO thing to do". [3]

What did Clarity Money do?

Clarity Money was an expense-tracking and bill negotiation app.

Why did Clarity Money fail?

What did Simple do?

Simple was a "neobank" platform for online banking and lending.

Why did Simple fail?

In a message to customers, Simple says BBVA has made the "strategic decision" to close the digital bank, with accounts moved to the parent firm.

What did Oranj do?

Why did Oranj fail?

What did Wirecard do?

Why did Wirecard fail?

In 2019, the Financial Times published an investigation that alleged significant fraud at Wirecard, including forged and backdated contracts to inflate sales and profits as well as money laundering. [5] Subsequently in 2020, it was revealed that €1.9 billion was "missing" after which the CEO Markus Braun resigned and was later arrested. Former COO Jan Marsalek was also fired, ultimately disappearing to remain a fugitive till today.

Wirecard filed for insolvency soon after and the company is in the process of being sold, with the assets of its main business unit sold to Santander Bank for €100 million in November 2020.

What did Pay By Touch do?

Pay By Touch provided a biometric payment service, allowing users to link their financial accounts, personal identification information, and membership/loyalty accounts which were then used to make payments at merchant sites by touching a finger to a POS scanner.

Why did Pay By Touch fail?

Pay By Touch filed for bankruptcy in December of 2007, citing it “could no longer support the biometric authentication and payment system as it currently exists, based on lack of funding and current market conditions”. [6]

What did Bó do?

Bó was a digital banking venture conceived and launched by the Royal Bank of Scotland in response to a number of fintech upstarts in the UK., including Monzo and Revolut.

Why did Bó close?

Launched in 2019 in an already crowded market, Bó became a victim of the coronavirus pandemic, closing 6 months after it launched. RBS decided to drop Bó in order to concentrate on its established retail banking business, which was hit badly by the pandemic. Bó was ultimately integrated into Mettle, the SME-focused digital banking venture of NatWest, which was acquired by RBS in 2000. [7]