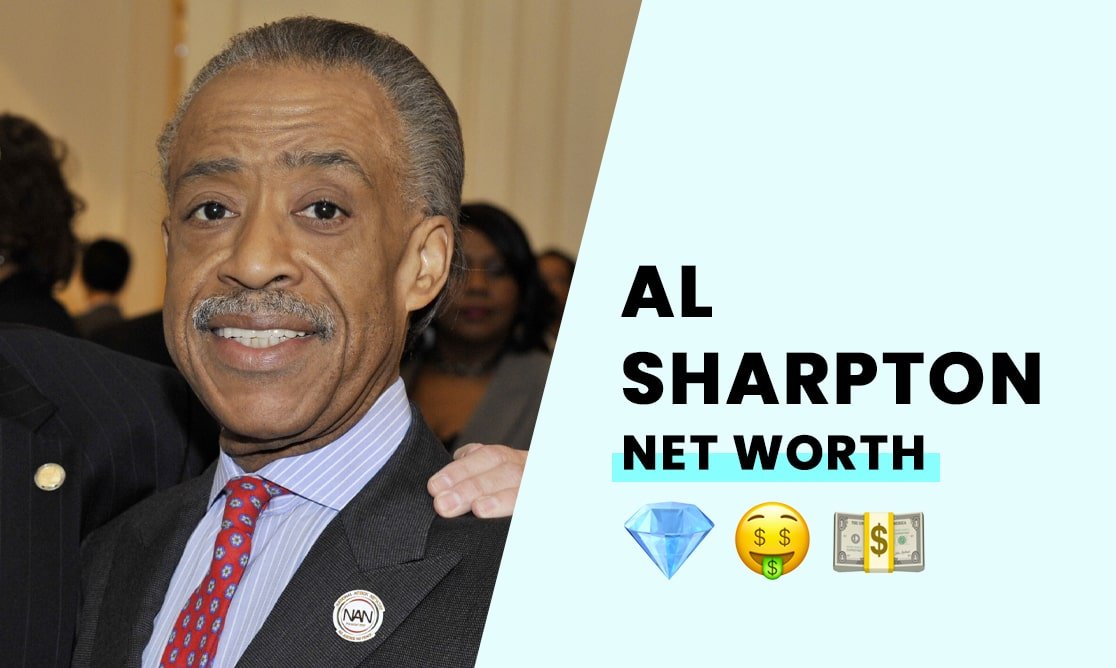 The net worth of Al Sharpton is estimated to be at least $5 million.

He is an African American civil rights activist and Baptist minister originally from Poughkeepsie, New York.

Al Sharpton, good friend of Barack Obama, lives in Brooklyn, New York with his wife Aisha McShaw and their children.

How did Al Sharpton build his net worth?

The Rev. Al Sharpton built his fortune through his ministries, speaking fees, and other political activity. Over the course of his career, Sharpton became one of the most recognizable names in the American Baptist church and on the Democratic side of politics. He even made a run for President in 2004.

Sharpton has worked as a civil rights activist and political activist for decades. Loved by many in the African American community, shielded by the left of the political divide despite many of his incendiary statements, and written off as a "con man" by Donald Trump, there can be no doubt the self-promoting Rev. Al Sharpton has managed to leverage his platform to make money.

His TV and radio talk show which helps him build and maintain his audience of followers. His radio show has national syndication, broadcasting across 40-markets, 5-days a week.

His role hosting the PoliticsNation show on MSNBC is likely his biggest source of income. He started hosting the show on the legacy media giant MSNBC in 2011. If other MSNBC talking heads such as Brian Williams, Lester Holt, Joe Scarborough, Mika Brzezinski, Rachel Maddow are anything to go by, then Sharpton is probably earning millions each year.

What is known from 2019 tax filings obtained by The New York Post, Sharpton took home $1,046,948 from his National Action Network charity, more than his normal salary.

The Reverend ran into some tax trouble with the IRS and New York state in 2014. According to reports, Sharpton and his companies owed more than $4.7 million in back taxes.

According to reports, Sharpton paid the bulk of the debt in 2015, with figures of between $2 million and $3 million of the debt remaining. The outstanding taxes knocked the Reverend's net worth down a peg or two but he stayed out jail.

I was raised by a single mother who made a way for me. She used to scrub floors as a domestic worker, put a cleaning rag in her pocketbook and ride the subways in Brooklyn so I would have food on the table. But she taught me as I walked her to the subway that life is about not where you start, but where you're going. That's family values.

How has Al Sharpton spent his wealth?

Asides from a full wardrobe of sharp suits and black gloves Sharpton owns several properties, including his family home in Cullman, Alabama built-in 1950 with an estimated value of $150,000, and allegedly a $2.1 million dollar penthouse in New York's Upper East Side.

Always a man of the people, Sharpton decided to buy himself a Rolls Royce Phantom for his birthday in 2014. At the time of the sale, the Phantom was the most expensive production car in the world, with a sticker price of $475,000.

How rich is Al Sharpton?

The sharply-dressed Reverend from New York has a net worth estimated to be around the $5 million.

Is Al Sharpton a millionaire?

Yes, although he has not publicly spoken about his net worth Al Sharpton is a million dollar pastor.

No, the Reverend was not born into a wealthy family. His decades long work in the public square as a civil rights movement, a Baptist ministry, MSNBC TV Host and as a well-connected member of Democrat Party has led him to where he is today.