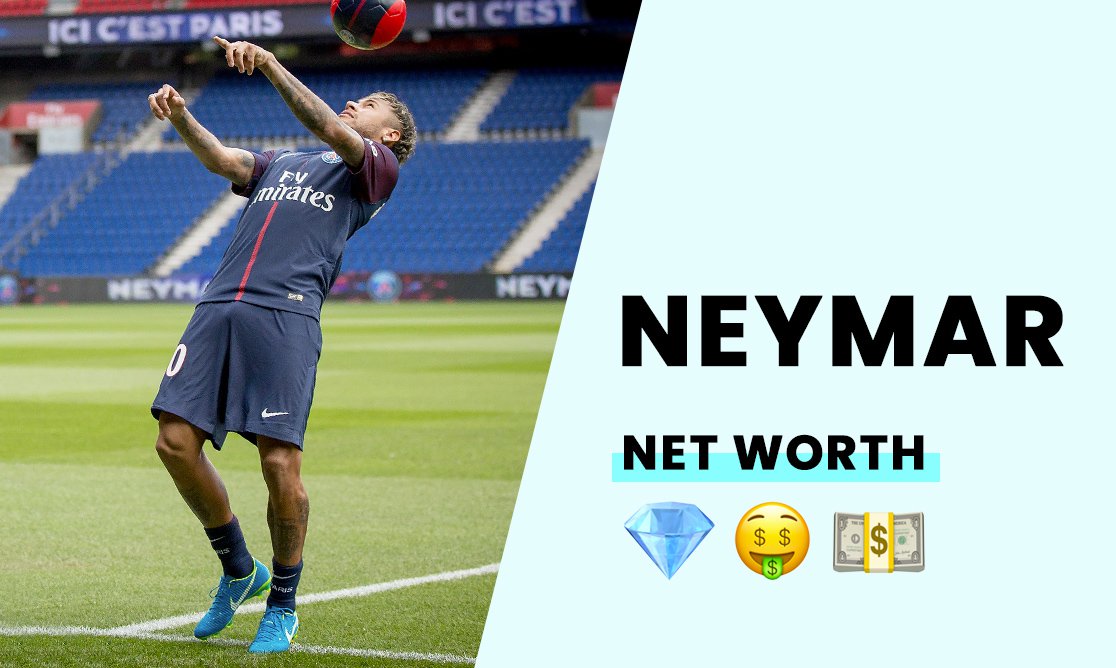 The estimated net worth of Neymar Jr is $200 million.

Neymar is a Brazilian football player and a legend of the modern game.

He's played for some of the top clubs in the world, including FC Barcelona and PSG (Paris St. Germain). Neymar is also a valued forward for the Brazilian national team, with 70 goals in 116 international appearances.

Paris Saint-Germain pays the football superstar a salary of $78 million, and that's before his endorsements and bonuses earn him a further $40 million.

Born in Mogi das Cruzes, Brazil, on February 5, 1992, Neymar da Silva Santos Júnior, is the son of former footballer Neymar Santos Sr. Neymar’s father, noticed his son’s skill at an early age, taking on the role of his development advisor throughout his career.

The family decided to put their faith in Neymar’s abilities, moving to São Vicente in 2003, so Neymar could test his abilities with the best in Brazil at the youth team Portuguesa Santista. They relocated to Santos that year, with Neymar joining Santos FC, training at the youth academy.

At 14, Neymar traveled to Spain to join the Real Madrid Youth Squad.

How did Neymar Jr build his net worth?

Neymar Jr had his first professional appearance with Santos in March 2009, at 17-years old. He came on to the pitch in the final 30-minutes of the match. During his rookie season with the club, Neymar Jr would score 14 goals in 48 games.

He continued his growth with the club, scoring a further 42 goals in 60 games in his second season with Santos. In 2010, Neymar Jr won the 2012 South American Footballer of the Year award. His final season with Santos in 2013 saw him depart the club for FC Barcelona.

Neymar Jr was part of one of the most impressive attacking trios in the game of football. He played alongside Luis Suarez and Lionel Messi, with the FC Barcelona squad earning the title of the best team of all time.

The trio's success ended 2015 with the three players scoring a combined 122 goals. They broke the record the following year with 131-combined goals.

On August 3, 2017, Barcelona triggered the release clause in Neymar's contract, making him available for transfer to the French side, Paris Saint-Germain. The deal was the most expensive in football history at the time.

Neymar is also a valued asset to the Brazilian national football squad. He earned his first start for the team in 2010 at 18-years old. His first match in a Brazilian jersey was against the United States. Neymar represented Brazil at the 2014 and 2018 World Cup Finals.

Neymar Jr says he owes his career to the help he got from his father during his early development. He said there were times where he thought about stopping playing football, but his father convinced him to persist.

How rich is Neymar Jr?

With a reported fortune of $200 million, Neymar Jr is one of the highest-paid athletes in the sport and one of the most successful players in history.