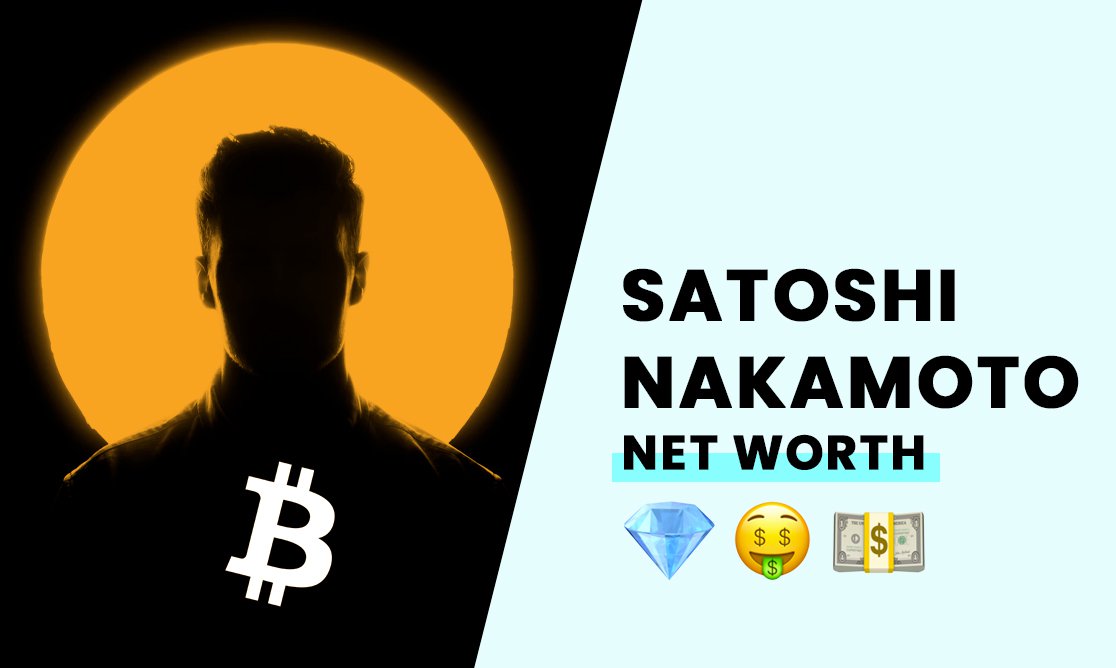 The estimated net worth of Satoshi Nakamoto is 1 million Bitcoin (BTC) valued at approximately US $48 billion as of December 2021.

Satoshi's wallet owns nearly 5% of all the Bitcoin ever mined, but no one has ever processed a transaction through the wallet address. This would make him one of the most wealthy people in the world.

Many people have tried to uncover the identity of the infamous Satoshi, and there is no concrete proof of his identity to date. However, we can make an educated guess, and we'll tell you the identity of Satoshi at the end of this post.

The Story of Bitcoin

Bitcoin is the world's first mainstream cryptocurrency. It came out of nowhere in 2009 after an author "Satoshi Nakamoto" penned the whitepaper for the protocol. Shortly after, people began working on the project, bringing it to life.

Initially, Bitcoin had a weak, niche adoption in the gaming community. However, it spread into mainstream awareness after approaching the gold price of around $1,300 in 2013. Bitcoin crashed after the Mt. Gox hack in 2014 but recovered in 2016 to see the beginnings of a new bull run that took the crypto to a new high of $20,000.

During the first mania, people were getting second mortgages on their homes to buy BTC, many of them entering the market right at its speculative peak. However, the price crashed back to just below $6,000, and many people thought that that was it for the crypto asset. However, Bitcoin had other plans, and the 2020 and 2021 bull runs saw the BTC price reach an all-time high of $70,000.

Satoshi Nakamoto is credited with starting the digital finance revolution. Today, there are dozens of premium cryptocurrencies like Ethereum and USD Tether and many Altcoins like Dogecoin and Shiba Inu, attracting investment from all corners of the globe.

By 2021 a raft of new crypto trading exchanges, broker platforms, and apps have started up to make it easy for people, businesses, and corporations to invest in Bitcoin, buy & sell coins, stake coins to earn a return, and take out loans against the value of their BTC holdings.

Crypto has also given rise to the NFT market and the sale of digital assets worth hundreds of millions of dollars.

What will Satoshi Nakamoto be worth in 10 years?

Satoshi's wallet remains stable, with 1 million BTC available for the creator to use at any time. However, Satoshi doesn't feel inclined to use any of the funds; the owner is not tempted to start spending, even at the height of the 2021 bull run.

So, with Bitcoin's high run of success, what will his wallet be worth in ten years? That's a speculative answer. If you speak to people saying crypto has no future, the answer is zero dollars.

However, crypto enthusiasts expect the price to continue to rise, even after the Wyckoff distribution knocked the confidence out of the market in late 2021. If the price continues its upward trend, the stock-to-flow model suggests the next stop for Bitcoin is $80k, and then on to $120k.

When that happens, no one can tell you.

Who is Satoshi Nakamoto?

According to experts and several documentaries on YouTube, the real identity of Satoshi is a British cryptographer named Adam Back.

He has several writing consistencies with Nakamoto and worked with many of the people influencing the project. While Back denies he is Nakamoto, it's our best guess.

Adam Back lives and works in England, where he is the CEO of Blockstream, a company he founded in 2014.

Craig Wright, an Australian computer scientist, claims to be the real Satoshi Nakamoto. The family of his former business partner, David Kleiman, a computer forensics expert and cryptographer who passed away in 2013, claimed "the two men had worked together to create and mine the first Bitcoin in existence, and that Mr Wright had stolen it" in a Miami, Florida, court case. The jury granted Kleiman's company $100 million in compensation for Wright's IP infringement and gave Wright permission to keep 1.1 million Bitcoins.

How much Bitcoin does Satoshi hold?