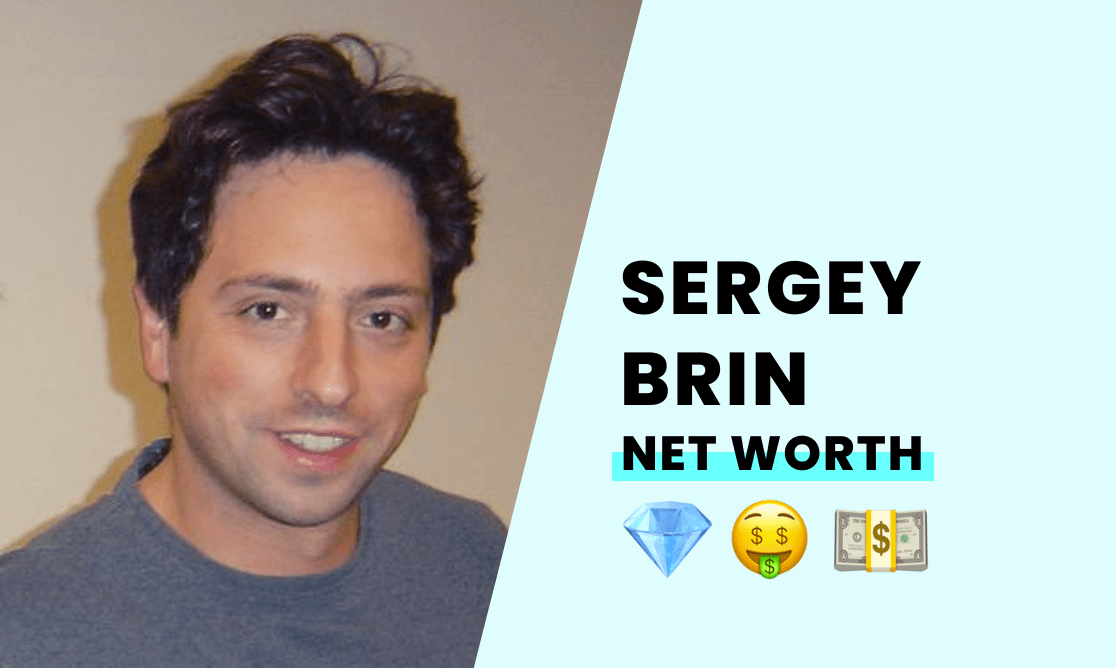 Sergey Brin's net worth is estimated to be approximately $94 billion.

The Brin family lived in a 3-bedroom apartment in Moscow with Sergey's paternal grandmother until they immigrated to the United States in 1979 after his parents lost their jobs.

Brin spent most of his childhood in Adelphi, Maryland.

As well as attending Paint Branch Montessori School, Sergey received education at home from his father, a professor in the department of mathematics at the University of Maryland. It was Mikhail who encouraged him to learn mathematics. His family also helped him retain his Russian-language skills.

Brin attended Eleanor Roosevelt High School in Maryland. In September 1990, Brin enrolled in the University of Maryland and graduated just 3 years later with his B.S. from the Department of Computer Science (with honors in computer science and mathematics) at 19 years old. In 1993, he interned at Wolfram Research, the developers of Mathematica and the WolframAlpha answer engine.

He is the author of more than a dozen papers on data mining and pattern extraction for leading academic journals. At Stanford, he met fellow graduate Larry Page, who recruited him to join his research project. It was a pivotal meeting, not only for Brin and Page, but for the world.

Brin's parents are renowned names in their respective fields. His father was a mathematics professor at the University of Maryland, and his mother was a researcher at NASA’s Goddard Space Flight Center. It is clear where he inherited his love of academia from.

In May 2007, Brin married Anne Wojcicki, a biologist in the United States and the co-founder and CEO of the personal genomics company 23andMe. Anne's sister Susan Wojcicki was an early employee of Google and became YouTube's CEO in 2014.

In 2008, the couple had a son, Benji Wojin, whose DNA they donated to science. The pair divorced in 2015, and Brin married Nicole Shanahan in 2018, having a daughter together in the same year. Unfortunately, Brin filed for divorce on January 4, 2022, after allegations of Nicole having an affair with Elon Musk.

Brin's mother, Eugenia, has been diagnosed with Parkinson's disease.

How did Sergey Brin build his net worth?

Sergey Brin is an internet entrepreneur and computer scientist who has amassed impressive wealth. The bulk of his $94 billion net worth is linked directly to his position as the co-founder of the search giant Google.

Brin and fellow Standford graduate student Larry Page founded Google in 1993. Page had the idea of creating a new way for people to find information online. Sergey worked with Page on his thesis, which would eventually spark what is known as Google today.

They launched BackRub, a search engine that used backlinks to move around the net. Following its creation, they created a report, which became one of the most downloaded research papers.

Google was incorporated in 1998, with the pair raising funds from their circle of friends to help improve the functionality of their creation.

In 2004, Sergey and Page took Google public, boosting their net worth overnight.

Now known as Alphabet Inc., the company is worth hundreds of billions of dollars and is one of the most influential companies in the world.

After spending years as the head of technology, Brin has since transitioned to the job of President of the parent company.

He spends most of his time working on "moonshots" at what they call the "moonshot factory," a division of Alphabet that aims to turn audacious ideas into reality.

How has Sergey Brin spent his wealth?

Sergey Brin owns a luxury penthouse in West Village Manhattan, for which he paid $8.5 million in 2008. It is believed that the luxury four-bedroomed apartment is currently worth close to $12 million.

He also owns a 30,000-square-foot mansion in New Jersey. That property cost him $48.8 million. It has 12 bedrooms and 19 bathrooms, an indoor baseball court, a home movie center, a swimming pool, and plenty of luxury entertainment facilities.

Brin owns a yacht, and it's no ordinary yacht. Brin's yacht is the world's fastest, bought in 2011 for $80 million. The yacht accommodates 18 guests and has a crew of 16. Brin and his Google co-founder, Larry Page, also own a fleet of eight jets.

Brin has also invested much of his wealth into clean tech and other ventures.

Sergey is also generous with this wealth, giving millions to charity, for example, to support cutting-edge research into Parkinson's disease. This cause personally benefits him since his mother has the disease, and Sergey's genetic code contains a mutation that means it's possible he might develop Parkinson's later in life.

Brin and Wojcicki, although now divorced, still jointly run The Brin Wojcicki Foundation. They have donated extensively to The Michael J. Fox Foundation, and in 2009 gave $1 million to support the Hebrew Immigrant Aid Society, another cause close to their hearts.

Furthermore, Brin has donated to Democratic Party candidates and organizations, including $5,000 to Barack Obama's reelection campaign and $30,800 to the DNC.

How rich is Sergey Brin?

Sergey Brin is so rich that his net worth of around $94 billion is almost incomprehensible.

Is Sergey Brin a millionaire?

Sergey Brin is actually a billionaire. He donated nearly $130 million of shares to the Sergey Brin Family Foundation and the Michael J. Fox Foundation for Parkinson's Research, which shows just how wealthly he is.