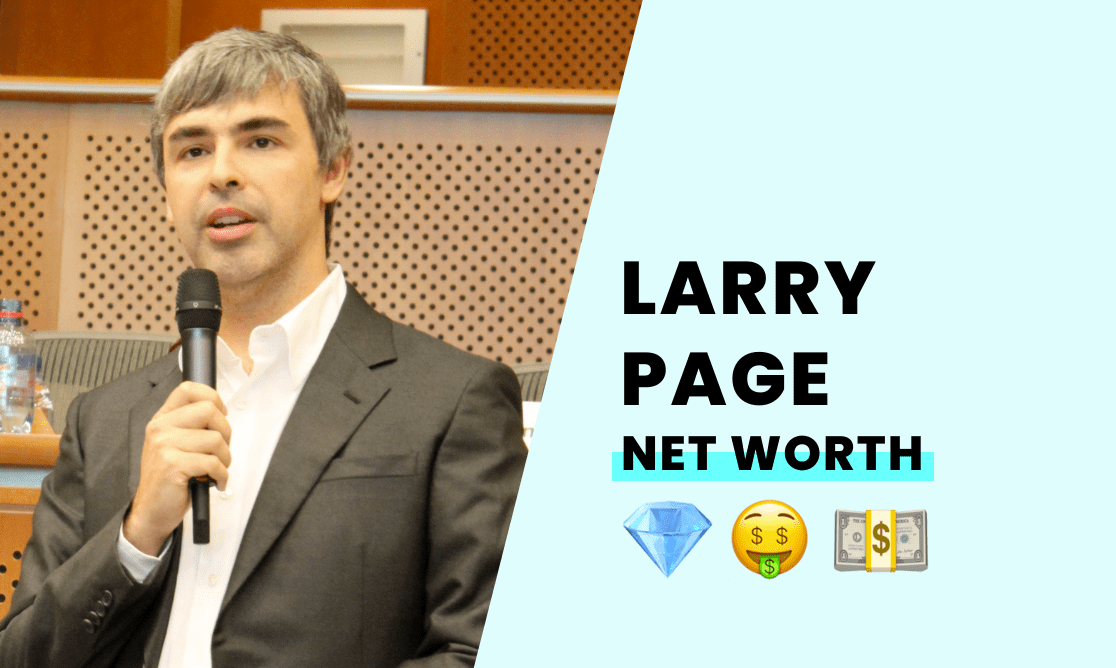 Larry Page's net worth is estimated to be approximately $85 billion.

Lawrence Page was born on March 26, 1973, in East Lansing, Michigan, to Carl Page and Gloria.

Page was an avid reader during his youth. In the 2004 Google founders' letter, he wrote about how he could "remember spending a huge amount of time pouring over books and magazines." He also played instruments from a young age and studied music composition growing up. His parents sent him to a music summer camp, the Interlochen Arts Camp, an experience he said inspired his impatience and obsession with speed in computing.

At the age of just 6 years old, Page began to play around with first-generation computers in his house. He became the first kid in his elementary school to turn in an assignment using a word processor and was always fascinated with inventing things, business, and technology.

Page attended Okemos Montessori School (now called Montessori Radmoor) in Michigan from age 2 to 7, then attended East Lansing High School in 1991 before pursuing a bachelor’s degree in computer engineering from the University of Michigan. Later, he enrolled for his Master of Science in computer science at Stanford University, which he obtained in 1998.

While at the University of Michigan, Page created an inkjet printer made of Lego bricks after he thought printing large posters cheaply using inkjet cartridges was possible. He also proposed that the school replace its bus system with a personal rapid-transit system, essentially a driverless monorail with separate cars for every passenger.

Larry enrolled in a PhD in computer science and focused his dissertation on studying the mathematical properties of the World Wide Web. Page focused on the problem of finding out which web pages linked to a given page, considering the number and nature of such backlinks as valuable information about the page. Sergey Brin would soon join his project. The pair wrote "The Anatomy of a Large-Scale Hypertextual Web Search Engine," which has been cited more than 22,000 times. This was the beginning of what would become Google and his future wealth.

Both Page's parents were computer science professors, so his childhood home was full of computers and science magazines. His fascination for technology was probably inevitable. Although his mother was Jewish, Page was raised to be secular. He also had an older brother, Carl Victor Page Jr., who taught him to take things apart, and before long, he was taking "everything in his house apart to see how it worked."

In 2006, he met Lucinda Southworth, and they married one year later on Richard Branson's private island in the British Virgin Islands. His wedding was attended by many internationally known people, such as Richard Branson himself and Donald Trump.

Lucinda has always been actively involved in charity. Together, they established the Carl Victor Page Memorial Foundation to raise funds for social issues such as programs focusing on medicines, education, and poverty. Larry and Lucinda have two children whose names are unknown. Their first child was a boy, who was born in 2009. Their other child was born in 2011. His or her identity is still unknown as the couple is very private.

How did Larry Page build his net worth?

Chances are you have searched for this article via Google. If so, then you are already part of Larry Page’s legacy. Page and Brin invested their own money and borrowed from friends to purchase equipment. This equipment was cobbled together in Menlo Park, the birthplace of Google. The first check from Sun Microsystems for $100,000 was handed over to the pair, specifically written out to Google Inc. Most of Page's fortune is derived from his Alphabet stock, Google's parent company.

After the incorporation of the search engine in 1998, the pair expanded their server infrastructure, leading to a much faster search engine experience. Over the next 2 years, Google indexed more than a billion unique web pages. In the following years, Google secured $50 million to help fund its growth.

In 2004, Google went public with its IPO making Larry Page a billionaire before he was 30. The following year, Google purchased Android for $50 million, and T-Mobile launched the first phone using the OS in 2008. Since then, the company has grown to become one of the world's largest companies.

Page is also a heavy and early investor in Elon Musk's Telsa Motors, among other energy-saving technologies.

Since Google's 2004 initial offering, the billionaire has sold shares of both Alphabet and Google, valued at more than $10 billion.

How has Larry Page spent his wealth?

In 2005, Larry Page bought a 9,000-square-foot Spanish Colonial Revival architecture house in Palo Alto, California. It cost him $7.2 million. Then, in 2009, he started to buy up surrounding properties to create a complex. He rents these properties out or allows family members to stay in them. He made space for a large ecohouse, designed to "minimize the impact on the environment." Page also applied for Green Point Certification, with points given for using recycled and low or no-VOC (volatile organic compound) materials and a roof garden with solar panels. The 6,000-square-foot house also observes other green home design features such as organic architecture building materials and low volatile organic compound paint.

Larry reportedly loves to travel, and when he's in the mood, he bundles his family into his private jet and flies to exotic resorts on Fijian islands and other exotic destinations. Page bought his first jet in 2005 and now co-owns a fleet of eight planes with Sergey Brin and ex-Google CEO Eric Schmidt. He is also co-owner of an $82 million private terminal at San Jose airport.

Like most billionaires, Larry Page is a recognized philanthropist, giving millions of dollars to a charity organization named after his father, the Carl Victor Page Memorial Foundation. Larry and Lucinda also donated $15 million to aid during the West African Ebola epidemic between 2013 and 2016.

It is reported that Page suffers health issues relating to his vocal cords, and an anonymous source said that he donated more than $20 million to a vocal-cord nerve-function research program at the Voice Health Institute in Boston.

How rich is Larry Page?

Larry Page is very rich. His net worth is estimated to be approximately $85 billion.