How does Quadpay make money? 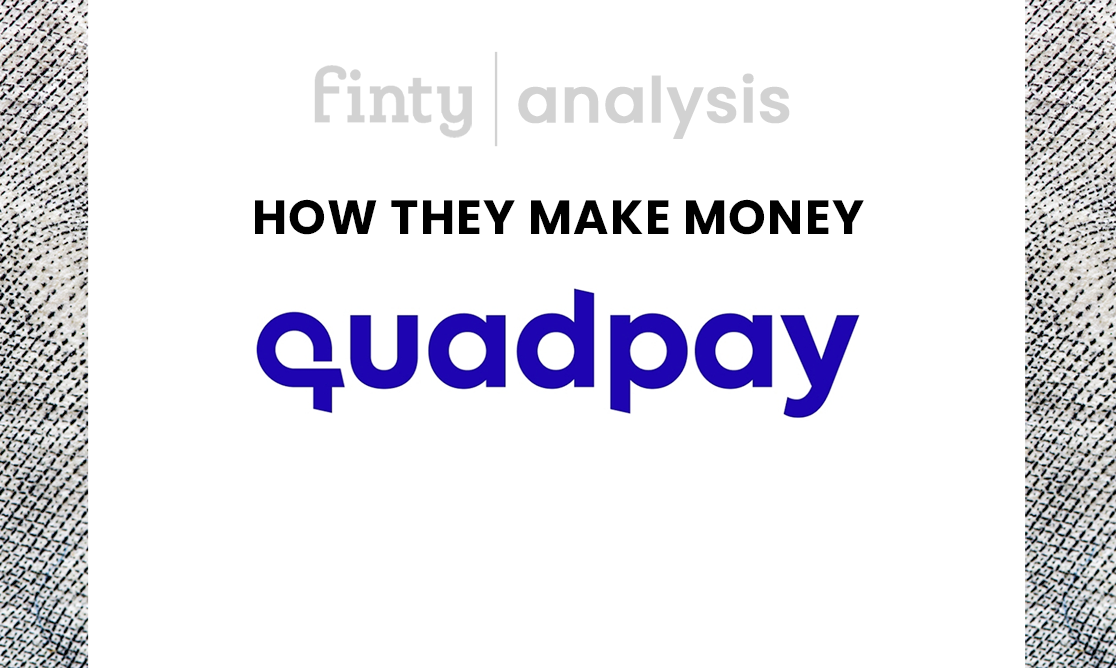 Quadpay offers consumers a buy now pay later (BNPL) payment option for online and offline retailers at point of sale. The company has a merchant network of over 10,000 partners and is one of the leading BNPLs in the United States.

Just because it provides interest-free loans doesn’t mean the company is working for free. In this article, we explore how the company's BNPL model generates multiple revenue streams.

Find out more about how Quadpay works in our complete Quadpay review.

What does Quadpay do?

Founded in 2017, Quadpay is a US-based fintech offering buy now pay later services to the US market. Zip acquired the company for $269 million in June 2020, in one of the year's biggest deals.

Quadpay allows consumers to take point-of-sale loans to finance their purchases from participating retailers. After funding the deal, consumers can repay the outstanding amount, interest-free, in four easy installments.

Quadpay works with some of the largest retail brands in the United States, including Apple, AOS, Lululemon, Forever 21, Nike, VANS, Poshmark, Walmart, and thousands of other partners.

Using the platform is easy. Shoppers start by signing up for the service and creating an account. Quadpay performs a soft credit check on your identity to confirm it's really you applying for the facility. After approval, you can use your Quadpay account to finance small purchases up to a specified limit set by Quadpay in accordance with the background check on your credit and finances.

Shoppers can make purchases directly through the app, the partner store, or browser extension. When ordering from an online merchant, the user selects Quadpay as their preferred checkout option.

After assuming the loan, the consumer makes four repayments, with the first being due at checkout and the three following payments two weeks apart. All installment amounts are equal, and missed payments roll over to the next payment amount.

If the account holder fails to make a payment, Quadpay blocks their account until they finish paying the loan. Missed or non-payments may result in the user being denied future credit with the company.

How does Quadpay work?

Founded in 2017 by Brad Lindenberg and Adam Ezra, Quadpay has its headquarters in New York City. Both entrepreneurs have a history in financial services before opening Quadpay and they jointly act as the firm's CEO.

In 2020, Quadpay had its best year to date. The quarantines enforced by governments across the US and UK saw the company experience higher demand for its loan services as more people started shopping online.

As Quadpay started gaining increasing traction in the market, more merchants began coming on board to access the Quadpay network of customers. As a result of providing merchants with access to its user network, the company managed to onboard several high-profile brands, including Nike and GameStop.

In 2020, Quadpay managed to grow its North American business by more than 200%, with thousands of new users registering for the platform each day.

Let's analyze the revenue streams to see how this company earns money.

Quadpay generates the bulk of its revenues from merchant fees levied on transactions processed using its consumer network. Every time a consumer takes a loan, Quadpay receives a cut of the sale. As a result, Quadpay's central business model revolves around bringing more customers into its network.

Unfortunately, Quadpay doesn't make its transaction fees publicly available. We assume they are in line with industry alternatives, which is around 2% to 4% per transaction. There is also the possibility of a fixed, flat-rate transaction fee on each sale, which is typically $0.30 with other lenders.

So, why would merchants sign up to add Quadpay as a payment option? By accessing the Quadpay market, the company shows that the use of its payment system can increase a retailer's orders by up to 20% month-on-month.

Shoppers pay convenience fees on their loans, with a maximum fee of $1 per installment. Therefore, if you pay over four installments, you have charges of $1, adding up to a total of $4. Quadpay charges these fees to cover its operations costs like salaries and office rental.

Quadpay makes a significant part of its income from late payments. Some best practices boards declare that Quadpay and other BNPLs are unethical, providing predatory loan services.

However, new studies show that's not the case, and today, Quadpay makes the bulk of its revenue from merchant fees, not late payment charges. However, if customers miss a payment, they receive a late fee of $7 charged to their account.

Quadpay doesn't report to the credit agencies, so it won't affect your credit score if you're late with a payment. However, it also doesn't report good payment behavior either, giving you no incentive other than avoiding the delinquent fee to pay on time.

Quadpay introduced a Visa-backed debit card for users in late 2019. The company collects an interchange fee every time the users swipe their cards to make a purchase. Once again, the shopper doesn't pay this fee, and the charges go to the merchant.

Typically, interchange fees are less than 1%, and Quadpay splits the transaction costs with Visa. There is no data disclosing the percentage Quadpay receives for this fee.

The company's primary focus is on increasing its user base and its merchant network. As a result, in late 2020, Quadpay rolled out an extension for the Google Chrome browser. When shopping online through the browser, a “Pay with Quadpay” button is generated for any online purchase, whether the merchant partners with Quadpay or not.

Quadpay aims to diversify its product offering into other consumer credit options as well and the company has indicated interest in entering the consumer banking sector.

Since Quadpay is a leader in the US market, its core competitors come from other BNPLs like Affirm, Klarna, Sezzle, and Afterpay. However, there are several new companies rapidly taking market share from the leaders in the space. Some of the top competitors to Quadpay include Splitit, PayPal, and GoCardless.