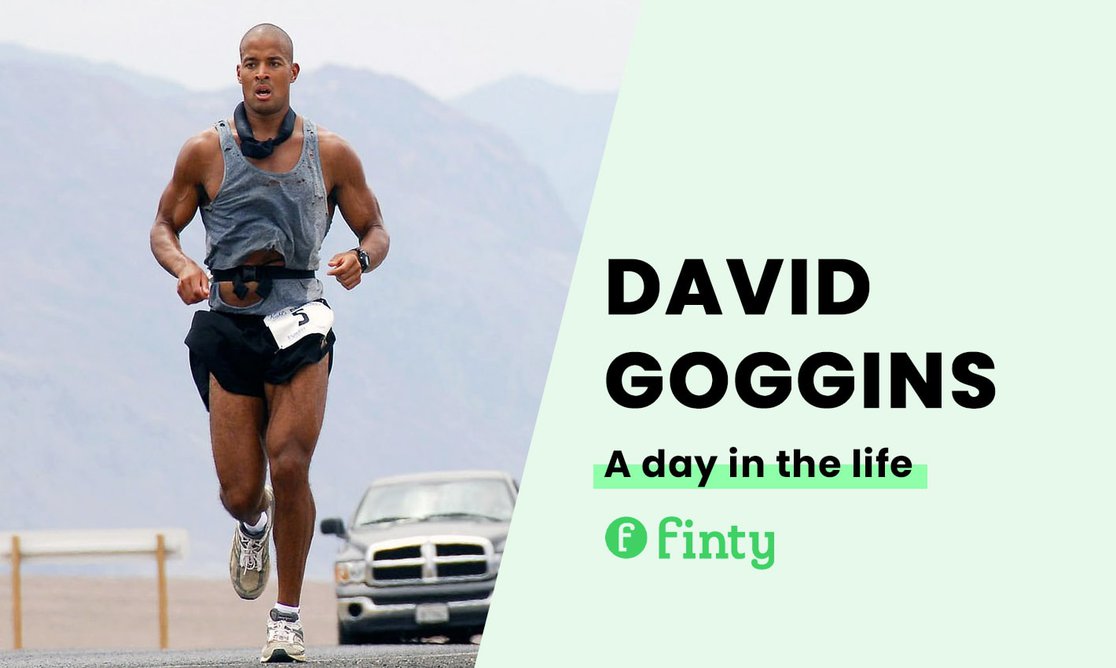 In the early 2000s, David Goggins – then 24-years old — worked night shifts as an exterminator. His addiction to chocolate shakes and burgers had him weighing in at 300lbs. Some two decades later, David is an accomplished military man, athlete, and author.

Holding the title of "The Toughest Man in the World", Goggins is the only man ever to complete Navy SEAL training, Army Ranger Training, and Air Force Tactical Air Controller training. Even more impressively, he went through the SEAL training three times before eventually completing it.

It was his appearance on episode #1080 of the Joe Rogan Experience podcast that shot him to international fame after he told his life story and laid out the mindset that allowed him to complete superhuman feats of endurance.

If you think you're running the redline with your daily routine, you'll feel pretty sheepish after taking a look at David Goggins' lifestyle.

So, what does a day in the life of the toughest man on earth look like? Let's unpack his daily schedule to see what we can learn.

After researching his morning schedule, one thing is clear – this man is a beast. He wakes up at 3 am, then decides whether to go for a run or go straight into his stretching routine.

Goggins stretches for around two hours each day, and he claims to have only missed two days in the last six years. On the JRE podcast, he explained to Joe Rogan how he never used to stretch until he started experiencing imbalances in his body.

He runs every morning, but he says he varies when he takes his run, depending on his mood. He describes how he sometimes walks past his running shoes three or four times during the morning, staring at them at each pass while he convinces himself to start.

Typically he runs 10 to 15 miles in the morning morning, depending on whether or not he's training for an event. That effort would already be a tough workout for most mere mortals, but he then straps on his backpack and cycles 25 miles to work.

By 11 am, the fitness bug bites again and he'll take a mid-morning run, typically around 5 miles in length, just to get the blood moving before lunch. Why not?

David Goggins has been able to translate his athleticism into wealth. Find out how David Goggins built his net worth.

Goggins is a practitioner of intermittent fasting (IF), which he believes helps him manage his energy levels efficiently. (With IF, you stay in a fasted state and only eat for an eight to twelve hour window each day.)

Although he wakes up at 3 am, he doesn't break his fast until after his mid-morning run. Typically, he'll wolf down some blueberries with steel-cut oats for breakfast, and then he only eats one other meal in the evening.

He meets his calorie needs, but after his experience with Shake Shack blowing him up to 300lbs, he only eats clean and never eats junk food.

While his daily routine involves enough exercise to maim an Olympic Athlete, he still manages to listen to his body. Sundays are his day off, reserved for rest and recovery from the stress he puts on himself during the week.

The afternoon at the office sees him preparing motivational speeches, writing, and managing his successful business. He is an in-demand speaker and a world-class athlete.

His workday usually finishes around 4 pm, when he cycles the 25 mile-long journey home. After riding home, you might think he's done, but that's when he laces up his shoes and hits the road again for another 5 to 6 mile run.

After the evening run, it's time to prepare the evening meal. Goggins follows a clean diet, but he says he eats carbs, fat, and protein, with no food aversions or special diets.

After eating, he settles down to read and spend some quality time with his wife, Aleeza, before turning in when he feels tired, typically around 10 pm.