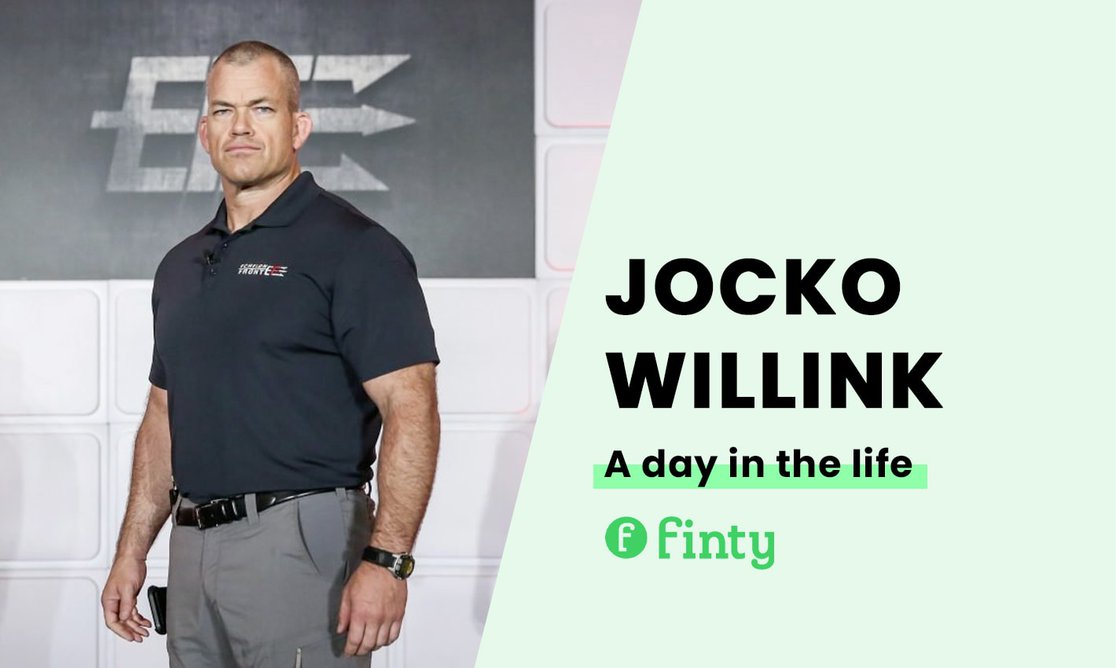 Co-author of the New York Times #1 bestseller, "Extreme Ownership: How U.S. Navy SEALs Lead and Win, Dichotomy of Leadership", Jocko Willink is a former Navy SEAL who shot to fame on social media after his appearance on episode #729 of the Joe Rogan Experience.

Since then he has built a cult-following in the personal development space. His brand of no-nonsense accountability seems to ring home with a large audience. Starting his own podcast — inspired by his time with Rogan — Jocko found an outlet to reach his audience and spread his message.

The Jocko Podcast has over a million followers, and it’s black-and-white theme gives every word Jocko says a grainy, hardened effect that draws in the listener.

He's managed to turn his rigorous post-military routine into a successful career, building a strong net worth position.

So, what does a daily routine look like for one of America's elite military warfighters?

When Joe Rogan needs a boost in motivation, he tunes into Jocko's Instagram where, every morning, like clockwork, Jocko posts a picture of his TIMEX Ironman digital watch, reading 4:30 am.

As a former military man, it's understandable that a large part of his identity involves rising early. But not everyone in the Willink household rises early. Willink does everything he can to avoid waking up his wife and has a tip for anyone who wants to avoid their partner's wrath – use the song "Iron Swan" by The Sword as your alarm tone. (Alternatively, wear an Apple Watch and set the alarm, which will pulsate on your wrist and wake you up without making a noise.)

He sets multiple alarms every night, but rarely uses them unless he's recovering from a heavy workout or event.

In keeping with his military training, Jocko lays out all his clothes for the following day before he turns in each night. He'll also have a bag packed with everything he needs if he's going out of the house.

Most of the time, his day begins with a push / pull workout with free weights and machines. He'll also add core work and cardio into the mix a few times a week.

After exercising, he showers off and starts working through his to-do list for the day. As a rule, Jocko always prepares his to-do list the night before.

Being a former military man, you would expect Jocko to be into coffee as his morning pick-me-up. However, he can't stand the stuff, blaming the caffeine crash for ruining his day. Tea is his preferred drink. In fact, he introduced a line of tea beverages and products to Echelon Front, and they're a big hit with his podcast audience.

Most of his time is spent between his podcast and Echelon Front, where he's the company's acting CEO.

He skips breakfast, preferring to remain in a fasted state until the late morning or early afternoon. He does a 24 hour fast at least once every two weeks and a 72 hour fast every quarter.

Lunch is between 11 am and noon, and it's usually a simple lunch, like grilled chicken with vegetables on the side. He follows a Paleo lifestyle, avoiding grains and other processed carbs, like bread.

After lunch, Jocko will typically spend the rest of his afternoon dealing with emails and other business issues until around 3 pm when he heads home to his house in San Diego. (Willink grew up in Connecticut but moved to San Diego to be close to the SEAL base.)

He enjoys life in San Diego and spends many of his afternoons with his kids at the beach. He's an enthusiastic surfer and enjoys riding waves at the local beach breaks in the area.

One of his greatest passions is Brazilian Jiu-Jitsu, a sport which has become synonymous with his name. Willink holds a black belt under world champion Dean Lister.

When he is not at the beach, his afternoon involves teaching Jiu-Jitsu out of the gym, Victory MMA and Fitness, which he co-owns with a friend.

Training finishes around 8 pm, after which he goes home and has dinner, typically steak and vegetables.

As a married father of four, Jocko enjoys spending time with his kids in the evening and playing guitar.

Before he retires at around 11 pm, Jocko will pen out his to-do list for the following day. And lay out his clothes.