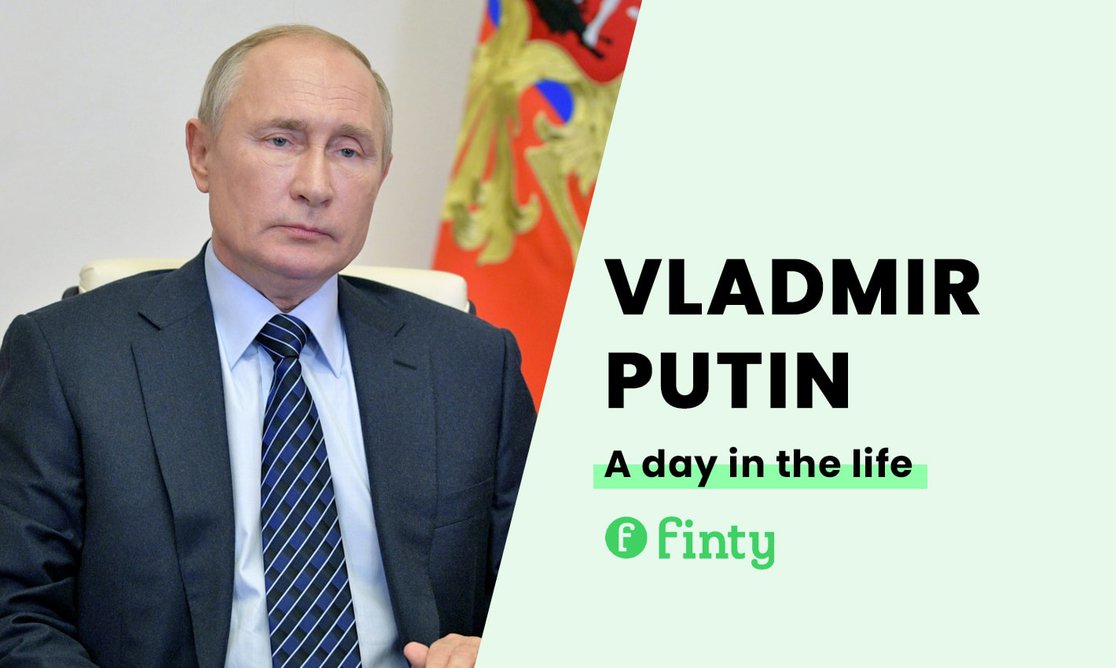 Vladimir Putin is an ominous political figure. The controversial president's career has been littered with questionable events, from tension in Syria to the suspected poisoning of intelligence agents to the invasion of Ukraine.

As a former KGB agent famed for his self-aggrandizing macho stunts, Putin is a formidable character and a respected leader among the BRICS (Brazil, Russia, India, China, and South Africa).

Many Russians back Putin due to the rebuilding of the nation — economically and, more recently, militarily — in the wake of Dmitry Medvedev's mishandling of the economy. Putin's incredible wealth is linked inextricably with the post-Soviet transformation of Russia's economy.

However, many journalists believe Russia's economic good fortune comes at the cost of authoritarian social policies forced on the Russian people and rampant corruption.

Regardless of your opinion of Vladimir Putin, he is an influential force in geopolitics.

What does a day in the life of the Russian leader look like?

Inside a day in the life of Vladimir Putin

Putin stays up late into the morning, and he’s a late sleeper. On most days, he doesn’t often sleep past noon.

Putin starts the day with breakfast, where he enjoys a sizeable meal.

He’ll either start with porridge or an omelet, and he enjoys quail's eggs. Ingredients for his breakfast come from the Kirill farmland estate, Russia’s patriarch and religious icon.

He will enjoy some cottage cheese with his breakfast for healthy fats and protein, along with a glass of fruit juice. Everything is fresh, and when on trips overseas, the Kremlin approves all his meals before he eats.

After finishing his meal, the president enjoys a cup of coffee.

Putin enjoys his time in the pool, where he spends around 2 hours every day. According to his aides, this quiet time is where the leader does much of his thinking.

After completing his swim, the president moves on to the gym, where he is often accompanied by Prime Minister Medvedev, and dressed in a gym outfit valued at $3,200.

He claims to prefer weightlifting over cardio. It seems President Putin wants the world leaders to know he’s a fit and strong man.

Occasionally, Putin will swap his gym session for one of his other passions, a game of ice hockey, where he plays with a team of guards.

According to spectators, the opposing players give Putin way when he wants to score.

Putin is also an accomplished martial artist. He holds a black belt in judo and often spars with members of his guard unit.

After his "morning" exercise, Putin heads to his quarters to dress for the day's meetings.

Putin doesn’t get to work until around 5 pm.

He starts his afternoon reading through briefing notes prepared by his staff.

Reports typically include information on foreign affairs and intelligence, and he’ll read through newspaper clips and international news.

He famously — perhaps paranoiacally — avoids tech at work. He abstains from using a computer or a smartphone, preferring to sort through "red folders" of documents, and he uses a landline telephone instead of communicating through email.

If he is traveling abroad, his staff replace everything in the hotel room before he arrives, from soap to toilet paper.

After finishing off the day’s responsibilities, Putin will head home if he doesn’t have an evening engagement with a foreign dignitary.

He enjoys spending some time with his dogs, Konni and Buffy. Most days, though, Putin works from home. He apparently dislikes the 25-minute journey to the Kremlin, and prefers to spend his time at his Novo-Ogaryovo estate complex on the shoreline of the Black Sea.

Putin is a night owl, and he’s at his sharpest at night. He often stays up late working or reading, and has his evening meal prepared by his personal chef.

Apparently, he has a weak spot for pistachio-flavored ice cream, and he even presented it as a gift to Xi Jinping, the president of China, at a meeting.

Putin avoids alcohol, but he might have a glass of wine at a formal reception. After attending dinners or political events, Putin will return home for the evening at around midnight.

He’ll spend the next few hours working and reading, eventually getting to bed at around 3 am.