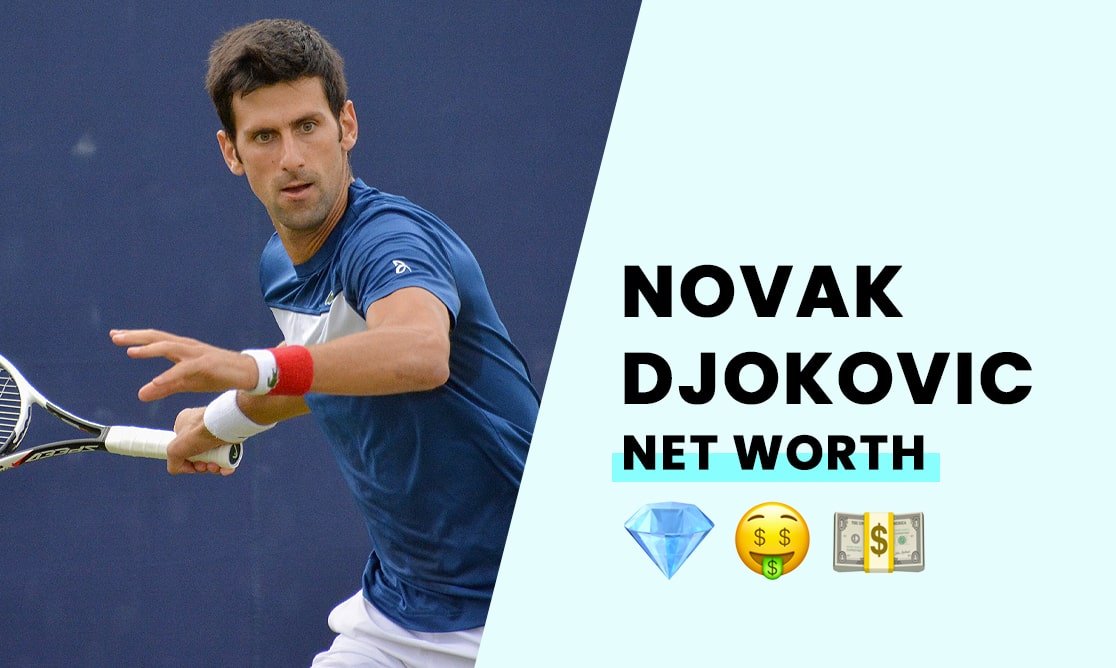 Novak Djokovic's net worth is estimated to be $250+ million, making him the highest-paid player in tennis history.

The world-famous tennis superstar has been prolific on the court with 1,000+ wins and over $134 million dollars in career earnings.

Born in the late '80s in war-torn Belgrade, Serbia, Novak was born with a tennis racket in his hand.

He has two younger brothers, Marko and Djordje.

He wasn't born into a tennis-playing family. His mother and father were professional skiers and understood what it takes to be competitive in sport.

Novak learned how to play tennis from 4 years old on a court across the street from his parent's restaurant in Serbia.

Novak married his childhood sweetheart Jelena and has two children.

How did Novak Djokovic build his net worth?

Novak Djokovic built his $250 million net worth by being a constant fixture at the top of the ATP rankings for many years, competing against the most dominant tennis players of his generation: Roger Federer,Rafael Nadal, and Andy Murray.

He has won 20 Grand Slams in the men’s singles and holds many other tennis records.,

During his career, Novak set the record for the most prize winnings in 2011 having taken home $12 million in that single season.

Novak started as a professional tennis player in 2003 at age 18 when he cracked the ATP Top 100.

His first Grand Slam tournament was the Australian Open in 2005, when he put his skills on display against the likes of Stan Wawrinka and Marat Safin.

By 2006 the prize money began flowing when he secured his first ATP titles in France and the Nederlands.

And in his 2007 campaign, Novak played in the US Open Final, secured his first master's title, and ranked among the top #3 players.

The next year, 2008, he got his first major title, two masters, and a yearend championship title for the first time.

Over the next several years, Novak's career was heating up. He continued touring the globe to play in tennis competitions, and by 2011, he became the world's number 1 ranked player.

His career earnings are more than $134 million dollars.

As his performances continued to improve and he became ever more established on the tennis tour, so did his winnings and sponsorship offers.

The revenue from sponsorship deals matched his earnings from winning on the tennis court.

For instance, when his tennis career began to hit its stride in 2011, Novak entered into a 5-year sponsorship deal with Uniqlo worth approximately US $10 million per year.

No doubt Djokovic's fun-loving personality played a big part in sponsors choosing to partner with him.

He earned the name "The Joker" for his many light-hearted on-screen impersonations of other tennis players.

The list of sponsors over the course of his career has included major global brands and regional brands who were eager to sign him as their ambassador:

How rich is Novak Djokovic?

Is Novak Djokovic a millionaire?

Yes, Djokovic is a multi-millionaire.

Does Novak Djokovic own properties?

According to reports, Novak owns a string of properties in Serbia, Monte Carlo, Spain, Dubai, New York City, and Florida, including a US $10 million mansion in Marbella, Costa Del Sol, Spain, where he spent a lot of time during Covid-19 lockdowns.

Does Novak Djokovic own a private jet?

Yes, Novak owns a private jet. He has also flown private jets with the NetJets company.

Does Novak Djokovic own a yacht?

How much did it cost Novak when he was deported from Australia in 2021?

However, due to Australia's fumbled handling of their strict Covid-19 laws during the pandemic, Djokovic was allowed to enter Australia but was deported from the country before the competition began. As a result, he missed out on the opportunity to defend his title.