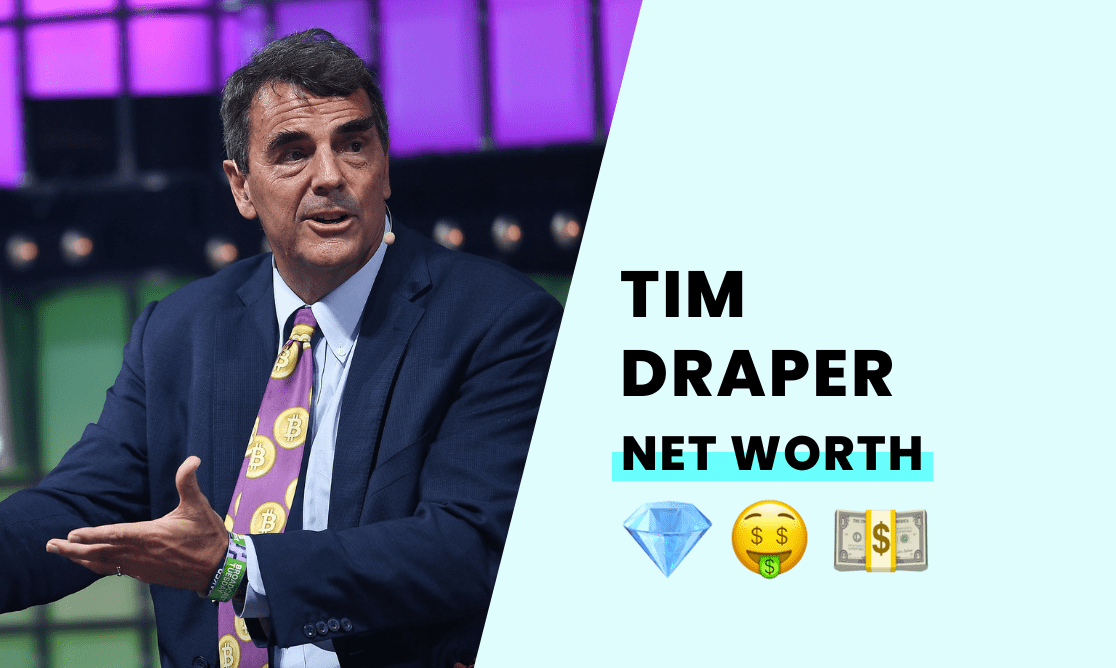 Tim Draper's net worth is estimated to be approximately $1 billion.

Draper comes from Silicon Valley royalty and credits his father and grandfather for his introduction to the world of business and investing.

Both his father and grandfather were pioneer venture capital guys in Silicon Valley long before many of today's tech giants and big name investors were conceived.

In fact, the very first venture capital firm in Silicon Valley – Draper, Gaither and Anderson – was founded by his grandfather in 1958. His father was no slouch either, he founded Draper & Johnson Investment Company in 1962 and Sutter Hill Ventures in 1964.

And just to give you a favour of just how well connected they were, Draper's father was the chairman and president of the Export-Import Bank of the United States and his grandfather was the USA's first ambassador to NATO. Useful people to know.

How did Tim Draper build his net worth?

Tim Draper is one of the most successful VC's in the world, that you might not be aware of.

He invested heavily into Hotmail, Yahoo! Mail, Skype, Baidu, and Tesla before they became popular.

His biggest investment swoop was when he purchased a large amount of Bitcoin in 2014 which had been seized from Ross Ulbricht's infamous Silk Road, by the US Marshals service. Back in 2014 the value of BTC ranged between $300 - $800.

Draper revealed to 'CNBC Make It' that despite his billionaire status he actually had a down-to-earth beginning to business selling apples by the roadside and later an oyster delivery business around Silicon Valley.

He got his BS in Electrical Engineering from Stanford in 1980.

And by 1984 he would go on to earn his MBA from Harvard Business School.

After graduation he interned at HP, but it didn't take long until he decided that life as a venture capitalist would better suit him.

In 1985 he opened his own venture capital firm, DFJ, which started with a savvy investment in Hotmail.

From there, as Hotmail grew, he expanded his investments to cover many other tech companies: Coinbase, Ledger, Box, Robinhood, Tesla, Webflow, and many more.

His reputation and his bank balance grew, which put him in a position to make the most important investment of his career.

When he purchased the seized Bitcoin, he ensured that he would have the capital to fund the rest of his dreams.

Draper is a crypto whale with major investments in Bitcoin (BTC), Ethereum (ETH), Ripple (XRP), and lesser known altcoins such as Tezos and Aragon.

Whilst he has made many great investing picks, there's a few bad ones. He was one of the first investors in Elizabeth Holmes' Theranos.

How rich is Tim Draper?

We estimate that Tim Draper has an estimated wealth of $1 billion.

Is Tim Draper a billionaire?

Yes, Tim Draper is a billionaire.

Is Tim Draper the guy who bought the bitcoin seized from the Silk Road?

Yes, that's true. Rather than let 30,000 Bitcoin languish in the hands of the US Marshall's office, Tim Draper bought them in 2014 for only $19 million.