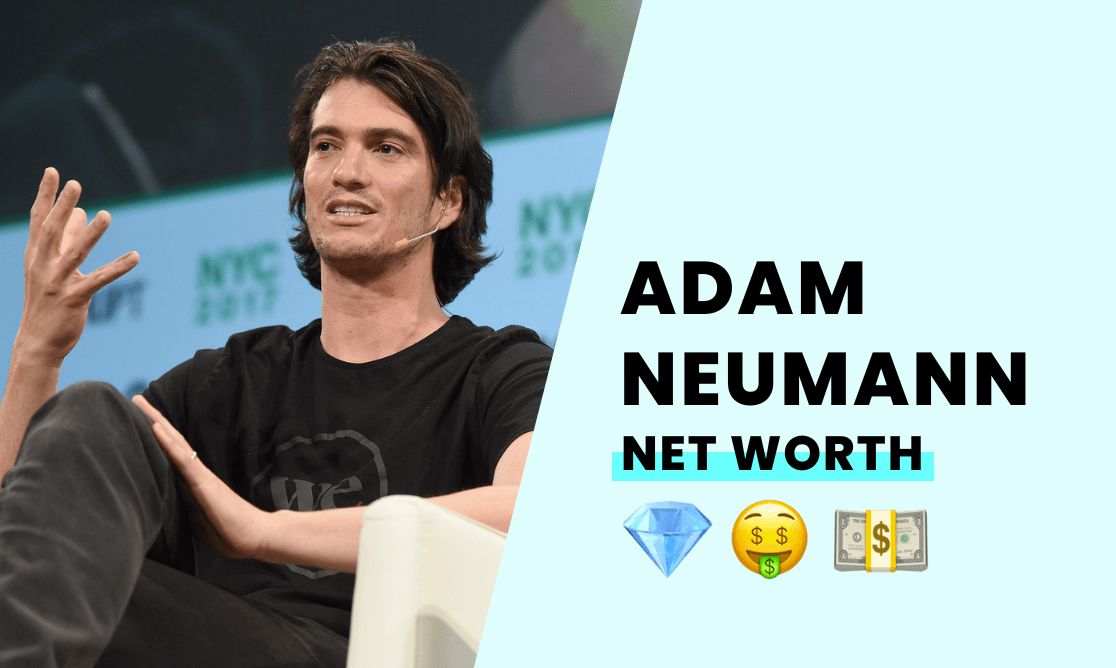 Adam Neumann's net worth ranges between $1.3 billion and $2.3 billion – despite the charismatic WeWork founder being ousted from his own startup.

The cult-like entrepreneur was a darling of the start-up world in the 2010s.

He aggressively grew WeWork to its peak valuation of $47 billion with over 700 locations worldwide but spectacularly crashed out of WeWork in 2019.

He and his wife Rebekkah were played by Jared Leto and Anne Hathaway in the 2022 Apple TV drama, WeCrashed.

Born April 25, 1979, in Tel Aviv-Yafo, Israel, Adam Neumann spent time growing up in various locations in Israel and the United States and later in the Nir Am kibbutz in Sderot, Israel, which is very close to the border with Gaza.

Both his parents were doctors. He has a younger sister, Adi Neumann, a former Miss Teen Israel.

Not many people know that WeWork founder Adam Neumann was dyslexic and couldn't read or write until age eight or nine.

Later, like all Israeli youth, he entered the military, serving in the Israeli Navy and rising to the rank of officer.

After completing his service in the IDF, Neumann moved back to New York City to study business at the Zicklin School of Business at Baruch College.

Adam Neumann is married to Rebekah, and together they have six children.

And despite their meteoric rise in wealth, the party lifestyle, and the intense media spotlight, they are together.

Learn how to calculate your net worth

How did Adam Neumann build his net worth?

In short, Neumann built his massive net worth off the back of WeWork, the company he co-founded with Miguel McKelvey in 2010. His wife, Rebekkah, was also heavily involved.

First came GreenDesk in 2008, but the pair pivoted the vision to WeWork in 2010.

The company went on a 10-year rocket ride from nothing to 600,000 paying members in 140 cities worldwide, generating $3.5 billion in revenue.

At its zenith, WeWork was worth $47 billion and was positioned to IPO on the NYSE.

The Financial Times reported that WeWork had become New York’s largest commercial tenant and was second only to the UK government in controlling the most square feet in London.

Bloomberg reports that Neumann made more than $2.1 billion from WeWork from stock sales and cash settlements.

And when his journey at WeWork came to an end in 2019, he was given a $1 billion golden parachute from SoftBank.

Neumann retains an 11% stake in WeWork — worth around $700 million – but doesn't have voting rights.

How did WeWork crash?

In an era of growth at all costs, Neumann chased the biggest possible company valuation by pushing the VC-backed company to grow too aggressively.

The company attracted massive investment from Goldman Sachs, JP Morgan, and SoftBank (Masayoshi Son). Hollywood actor Ashton Kutcher even got a slice of the action.

Revenues were impressive – so was the spending – and the net losses.

The company burned through cash reserves like there was no tomorrow, hiring staff, setting up more WeWork offices, signing expensive rental leases, marketing, a private jet, and throwing big parties.

And Neumann's jet-setting, hard-partying lifestyle became a liability for the company.

WeWork needed to assemble investors in order to get their IPO led by JP Morgan, over the line.

In the end, Neumann was ousted by the board in September 2019.

How has Adam Neumann spent his wealth?

According to various reports, Adam Neumann and his wife Rebekkah, have spent over $100 million on real estate amassing a $1 billion portfolio across the United States, as well as in his native Israel.

He's reported to own two properties worth $44 million in Miami Florida, a mansion up in the Hamptons, and a $21 million house in the San Francisco Bay Area.

Since WeWork, Neumann has also made big investments in approximately 50 startups from AI to mortgage lending, to crypto-backed climate action businesses.

How rich is Adam Neumann?

Amazingly, the entrepreneur was still worth approximately $1.4 billion - $2 billion despite everything that went wrong at WeWork.

At the peak of WeWork's success, the company was a global brand worth approximately $47 billion, and Adam Neumann was worth around $8 billion.

Was Adam Neumann fired from WeWork?

Yes, pretty much. Technically he stood down as CEO.

What is Adam Neumann doing now?

After WeWork, Adam Neumann kept his foot in the door of the tech world, investing in many startups.

In August, Neumann announced that he was making a comeback with a new real estate startup, "Flow." His startup had taken secured a $350 million investment from Silicon Valley heavyweight VC investor, Andreessen Horowitz, itself founded by billionaires Marc Andreessen and Ben Horowitz.