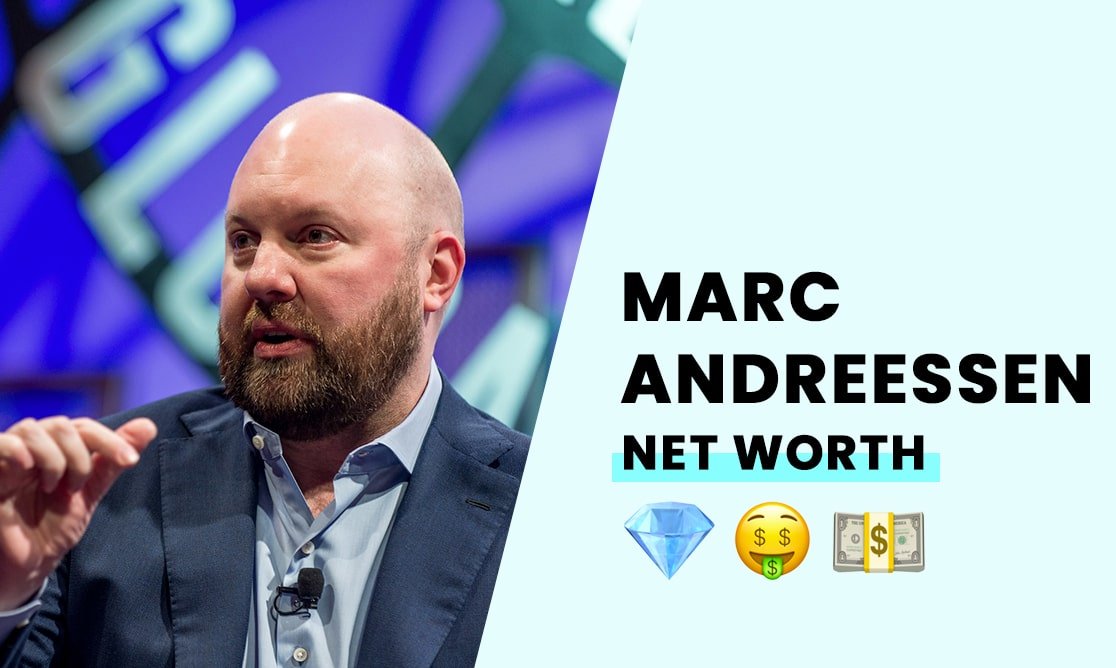 Marc Andreessen's net worth is estimated to be approximately $1.6 billion.

Marc Andreessen was born on July 9, 1971, in Cedar Falls, Iowa, to Lowell and Patricia Andreessen. He was raised in New Lisbon, Wisconsin.

Andreessen studied at the University of Illinois at Urbana-Champaign and graduated with a bachelor's degree in computer science in 1993.

During his undergraduate days, Andreessen interned twice at IBM in Austin, Texas, working with the team that developed the AIX graphics software. He also worked at the University of Illinois' National Center for Supercomputing Applications (NCSA), where he had the opportunity to learn Tim Berners-Lee's open standards for the web. While at the NCSA, Andreessen helped author the Mosaic web browser, considered the first graphical web browser in the world.

Marc Andreessen married philanthropist Laura Arrillaga in 2006. She was the daughter of the late Silicon Valley real estate billionaire John Arrillaga, the founder of the Silicon Valley Social Venture Fund. They have a son named John and live in Atherton, California.

How did Marc Andreessen build his net worth?

Marc Andreessen is a tech investor, entrepreneur, and venture capitalist. He is co-founder and General Partner of the venture firm Andreessen Horowitz. Andreessen made most of his money leveraging his tech expertise and savvy early-stage investments in winning ideas.

After graduating in 1993, Andreessen worked at Enterprise Integration Technologies and met Jim Clark, founder of Silicone Graphics. Together they founded Mosaic Communications Corporation, which was later renamed Netscape Communications. They created Netscape Navigator. It was Netscape's IPO that brought Marc Andreessen into the public eye. AOL subsequently bought Netscape in 1999 for $4.3 billion. Andreessen stayed on with the company as its chief technology officer.

In 1999, Andreessen founded Opsware with some of the proceeds from Netscape's sale. The company offered a range of internet and peripheral services. Its hosting services were sold to EDS and the rest of the company to HP in 2007 for $1.6 billion.

Between 2005 and 2009, Marc and business partner Ben Horowitz invested around $80 million in various startups, including Twitter. Considered super angel investors by many in the industry, the pair founded the Andreessen Horowitz venture capital firm in 2009. Beginning with an initial fund of $300 million, the VC firm grew to be worth nearly $3 billion within three years.

Andreessen Horowitz has invested seed capital in today's top tech companies, including Facebook, Pinterest, Affirm, Roblox, Coinbase, and Substack, among many others. Skype's sale to Microsoft was one of their larger transactions. They bought over a majority stake in Skype for $2.7 billion and sold it to Microsoft for $8.5 billion in 2011.

How has Marc Andreessen spent his wealth?

Marc Andreessen has continued to reinvest the returns from his tech investments into supporting more tech companies. Initially, the investments were made personally or with his business partner, and later through their venture capital firm Andreessen Horowitz.

Considering the companies which received seed capital from Andreessen Horowitz, it is fair to say that their venture funds have changed the internet, how people communicate, and how software is developed. Future-oriented as always, in June 2018, led by the firm's first female general partner Katie Haun, Andreessen Horowitz raised $300 million for its first crypto-focused fund.

Marc Andreessen has served on the boards of many companies, including Facebook, Stanford Hospital, Oculus VR, TinyCo, and OpenGov. He has made personal investments in LinkedIn and Raine and works as an advisor for Asana. He also sits on the advisory board of the planned megacity of Neom in Saudi Arabia.

Andreessen and his wife have significant real estate investments, including a $177 million 7-acre clifftop property in Malibu, which set the record as the most-expensive home sale in the history of California. Some of his other assets include a $44.5 million second home in Malibu beach, a mansion in Atherton, California, and a vacant lot in the suburbs of Las Vegas.

Reuters reported in 2012 that the six general partners of Andreessen Horowitz, including Marc Andreessen, were pledging half of their lifetime income from venture capital activities to charity to promote more charitable giving around Silicon Valley. They also planned to immediately donate $1 million to six Silicon Valley nonprofits, with beneficiaries ranging from food to youth programs.

Although there is a Marc and Laura Andreessen Foundation, it is inactive. However, the Laura Arrillaga-Andreessen Foundation (LAAF) remains active. It is a non-partisan, non-grantmaking foundation that empowers, educates, and equips individuals to be more strategic, impactful givers and women to be more effective leaders in the workplace and beyond. They focus on developing, curating, and democratizing access to innovative research-based strategies, tools, and tactics for philanthropy and leadership.

How rich is Marc Andreessen?

Marc Andreessen has an estimated net worth of $1.6 billion.

Is Marc Andreessen a millionaire?

Mark Andreessen is a billionaire with a net worth of $1.6 billion.

No. Marc Andreessen was not born rich. His wealth is the result of his inventions, business ventures, and investments.