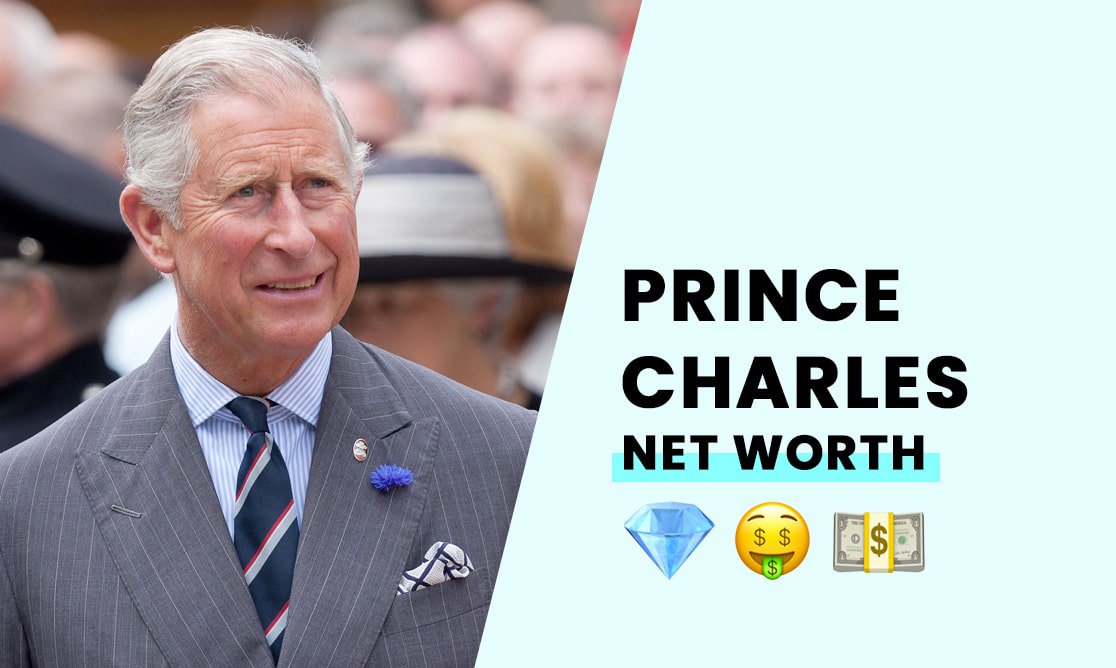 The estimated net worth of Prince Charles is $100 million.

Prince Charles has a very high net worth which can be attributed in part to his being a high ranking member of the Royal Family. He is most well known for being the child of Queen Elizabeth II and Prince Philip.

His wife is Camilla, Duchess of Cornwall and has two sons Prince William and Prince Harry from his first marriage to the late Lady Diana.

Prince Charles is heir apparent to become the King of England once his mother dies or abdicates the crown.

The Early Life of Prince Charles

Prince Charles was born in London in 1948. His full name is Charles Philip Arthur George, and he is the son of Queen Elizabeth II and Prince Philip.

He became a prince at the tender age of three when his grandfather, King George VI, died in 1952.

He has several siblings and spent the majority of his life in the palace living the life of an English Royal.

Prince Charles attended Gordonstoun as a child which was one of the more vigorous educational programs in the country.

He completed both his O-levels and his A-levels before graduation and pursued a higher level of education.

He went on to study at Cambridge University in order to study Archaeology and Anthropology in 1967.

He decided to change his subject of study halfway through and graduated as a history major.

How did Prince Charles build his net worth?

He has an estimated personal wealth of approximately US $100 million.

It can be very difficult to distinguish what belongs to an individual royal, their royal position, the corporate structure which manages their funds, or the wealth of an entire nation (as is the case in less democratic countries).

Let’s explore how he came to amass such a fortune.

The Duchy of Cornwall

Prince Charles's income is funded mainly by the Duchy of Cornwall.

It happens to be one of the oldest states in Britain, as well as one of the largest. The estate has lands, commercial properties, and residences, all of which generate revenue.

The Duchy has its own investment and financial portfolio. Prince Charles is provided an annual income from the Duchy in addition to being provided funding from the Sovereign Grant for official royal activities through the Crown Estate.

The Duchy of Cornwall has an estimated net worth of $1.3 billion dollars. It was first founded by Edward III in the 14th century. The point of the Duchy was to ensure that the firstborn son remained solvent and had work to manage while awaiting his time asking. Currently, there are 150 staff employed by the Duchy, more than 130,000 acres of land, and an impressive independent portfolio.

Prince Charles doesn’t have the ability to sell any of the holdings, but he is able to earn money by renting out the property to various commercial ventures, farmers, and even residents.

It makes about $50 million in revenue each year. Approximately $30 million is distributed between the Prince of Wales, his family, and management fees.

Aside from the Duchy, Prince Charles earns about US $3.5 million dollars a year from the Sovereign Grant which is a percentage of the profits from the Crown Estate.

Since he is a high-ranking Royal, spending all of his life in the public eye, it makes sense that he must have some personal productivity habits.

He spends the bulk of his time attending Royal duties as well as focusing on charities that help the poor, sick, and less fortunate.

He also has a unique understanding of history and politics.

How rich is Prince Charles?

Prince Charles has an impressive net worth of US $100 million.

He is the next in line to become the British Sovereign when his mother passes away or steps down from the throne. His wife, Camilla, the Duchess of Cornwall, will become the Queen Consort.