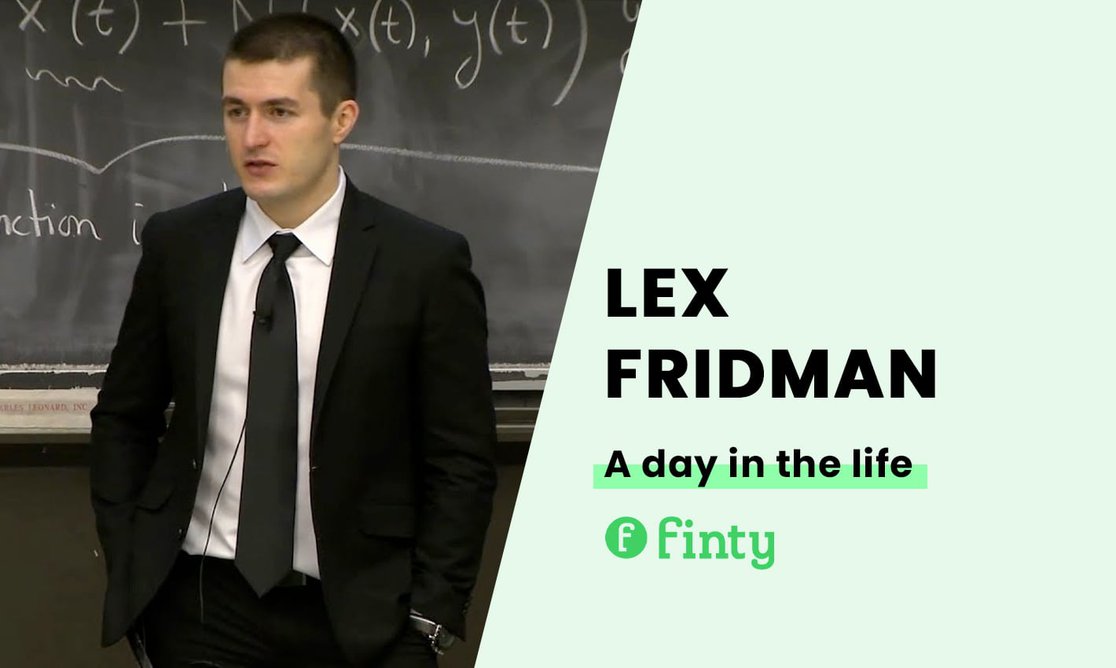 Ever since his first appearance on episode #1292 of the Joe Rogan Experience, social media has been alight with trying to figure out what it is that makes Lex Fridman tick.

Dressed in his black suit and skinny tie, he has a dry personality with a monotone voice. However, after listening to him speak, you find yourself lost in the possibilities of science and technology.

Lex has obviously been blessed with intelligence. He lives in a world of machine learning and artificial intelligence, and he’s friends with some really interesting people, like his hero, Elon Musk.

After receiving a BS, MS, and Ph.D. from Drexel University, he moved on to MIT, where he still assists with research projects today.

Lex Fridman's daily routine is highly disciplined with a defined structure. He employs mindfullness techniques, exercise, fasting, and scheduling to maximise his productivity.

Lex likes to keep stress levels low in the morning. He starts each day with a mantra, and he always makes himself aware that this might be the day he dies (a stoic quality embraced by Emperor Marcus Aurelius).

After rounding up his goals, he likes to visualize how his day will unfold. He wraps up this part of his morning routine by making a list of the ideas he wants to live up to as a man (another quality seen in stoics).

After getting his mind right, Lex gets to work. At 10 am, he launches into what he calls the first "Deep Work" session of the day. This session lasts four hours, and he takes as few as possible bathroom or drink-breaks during this period.

He avoids interruptions during his deep work cycle, using his standing desk to keep the blood circulating and take the pressure off his hips.

After the deep work session, Lex takes an hour or two off. During this time, he'll get his daily workout in. His exercise routine involves a five to six mile run, where he'll either listen to white noise or an audiobook to pass the time on the tarmac.

When he gets home from the run, he'll do some bodyweight exercises, favoring pushups and pullups. He'll take a cold shower and prepare for the second deep work session of the day.

The second deep work session is like the first, with no distractions and geared towards a state of high productivity.

On the weekends, he likes to record his podcast during the afternoon, talking with some of the world's leading minds and providing fascinating discussions.

From Elon Musk to Andrew Huberman, Lex interviews a wide variety of scientists and thought-leaders, asking inquisitive questions that provoke interesting answers from his guests.

Lex stays in a fasted state throughout the day, only eating one evening meal. He's a fan of simple foods, and one of his favorites is lean grass-fed organic beef with cauliflower rice.

He follows a ketogenic lifestyle, and he doesn't eat any carbs. He relies on basic supplementation to manage his mineral balance using sodium, magnesium, potassium, and calcium.

After dinner, Lex ends the day with a "Shallow Work" session. This session lets him get round to emails and checking in on social media.

He'll also use this time to edit his podcast, and if he's feeling in the mood, he'll watch a movie on Netflix. The shallow work session is flexible and less intensive compared to his earlier work sessions.

Before bed, he enjoys reading scientific papers or literature by Russian authors like Tolstoy. Lex ends the day with a gratuity session, and then aims to get six to eight hours of sleep.