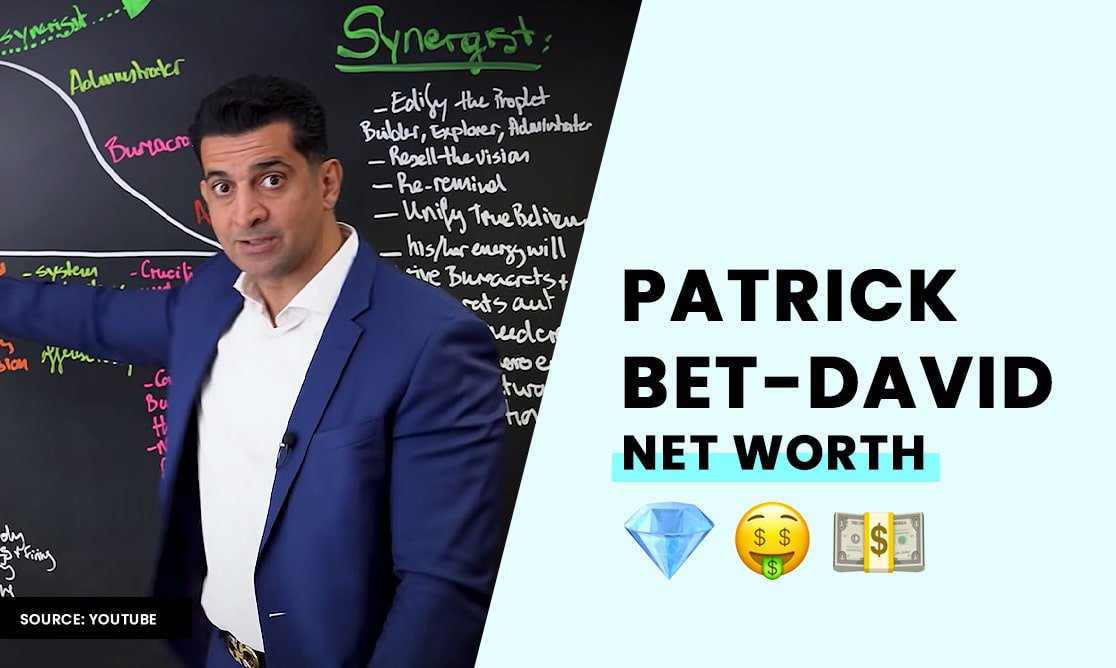 The estimated net worth of Patrick Bet-David is $160 million.

Also known as "PBD" to his followers, he is most known as the creator of Valuetainment, but he wears many hats. He also is the CEO and Founder of PHP Agency in addition to being a savvy businessman, entrepreneur, investor and social media personality.

Patrick was born in Iran in 1978 to Armenian and Assyrian parents. During the war, he and his father fled to Germany before eventually migrating to the United States in 1990. He arrived in the states at the age of 12, was eventually granted citizenship, and later joined the US Army.

Patrick attended Glendale High School in California. After his graduation, he went to Santa Monica Community College. He graduated with a degree in nutrition which he pursued based on his interest in bodybuilding. However, he is a firm believer that real-life experience trumps a college degree for most fields.

How did Patrick Bet-David build his net worth?

PBD is worth a mind-blowing $160 million dollars. Let’s take a deep dive into how he gained such massive wealth.

Patrick spent some time in the US military following his graduation from high school. He worked in a diverse assortment of regular jobs before he decided to take the plunge into the finance industry. He worked for Morgan Stanley prior to launching Saving America in 2009. Following the launch of that site, he did a few radio shows based in the Los Angeles area.

Patrick founded PHP Agency in 2009. It is a marketing organization for financial services that offers a wide range of products. The main products offered are health insurance plans, annuities, and 401K roll-overs. The main office is based in Texas. In 2017 Patrick was able to raise $10 million dollars in capital to expand his business. The funding came from a private equity syndicate.

In 2019 PHP hosted a massive convention with an impressive lineup of speakers that included Kobe Bryant and even President George W. Bush. The convention covered entrepreneurship, the future of business, personal development, and other topics that can help those new in the industry to make their mark.

Patrick owns this popular LLC tasked with creating and syndicating the YouTube channel Valuetainment. It also is tasked with the management of Valuetainment on other media outlets. Patrick uses his social media platform for marketing his business and sharing his ideas on finance. He interviews high-value personalities on his channel, which brings in a massive number of views, clicks, and downloads.

Included in the storied list of guests are prominent people such as Jordan Peterson, Ben Shapiro, Alex Jones, Jordan Belfort, Robert Kiyosaki, Ray Dalio, Mark Cuban, and Kevin Hart, as well as a string of Mafia bosses including Sammy Gravano and Jimmy Hoffa.

Patrick firmly believes that many things contribute to a person's success. It can be saving money, marrying the right partner, having a strong faith, or even working hard in school.

The most important part of success, however, is taking whatever your goals are and boosting your efforts to the next level. It is important to have a theory, become an expert in your field, gain experience, and apply your skills correctly in order to be productive.

How rich is Patrick Bet-David?

Through his insurance services marketing company and other ventures, he has grown his wealth to $160 million.